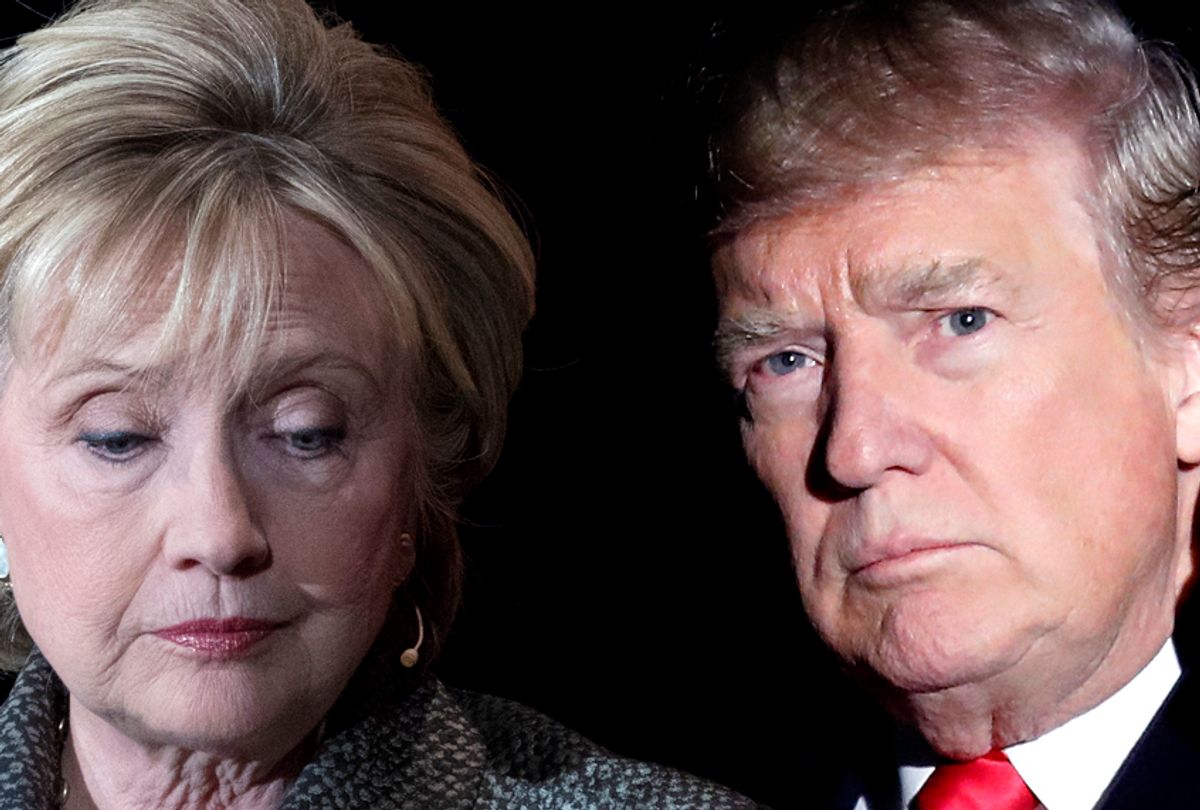 Donald Trump and his prominent supporters spent months last year promoting numerous unsupported claims that Democratic nominee Hillary Clinton suffered from various physical impairments. Now, however, they are protesting that questions about a politician's health are outrageous and inappropriate.

"The president's throat was dry. Nothing more than that," she said. Sanders added that Trump would be undergoing a routine physical examination early next year and the results would be publicly available.

The president's oral difficulties were proof to comedian Trevor Noah that Trump wears dentures. MSNBC hosts Joe Scarborough and Mika Brzezinski argued that the incidents offered further evidence to support their theory that Trump suffers from a form of dementia, a brain disease known to affect elderly people. Trump is 71 years old.

Generally speaking, psychiatrists and other mental health practitioners are forbidden from making remote diagnoses of people they have not interviewed in a clinical setting. Medical doctors are also supposed to refrain from making pronouncements on people who are not their patients.

Of course, those rules and customs have been routinely ignored. Almost since the science of psychology was invented, people of varying persuasions have sought to label prominent politicians as mentally ill or suffering from physical impairments.

While Trump and his surrogates consider health speculation about him to be inappropriate, they had no such problems making spurious claims about Clinton during the 2016 campaign, including alleging that she had developed dysphasia, a language disorder due to brain damage, as the result of a fall.

"It's something that needs to be addressed," Trump's former campaign spokeswoman Katrina Pierson said in August 2016. "She's taken a lot of time off the campaign trail."

At other times, Trump and his allies questioned Clinton's general health, repeatedly claiming she was too frail for the presidency. “Hillary Clinton doesn't have the fortitude, strength or stamina to lead in our world,” one Trump campaign ad pronounced.

While the White House took umbrage at speculation about Trump's health, his loyal media footsoldiers have been far more offended at the idea of people wondering about Trump's mental and physical health.

“All of the stress at NBC News seems to be getting to crazy liberal Joe Scarborough,” he said, claiming that Scarborough had experienced "a complete mental and emotional breakdown on national television.”

Hannity further implied that Scarborough may have been trying to retaliate against Trump after the president boosted a conspiracy theory that the MSNBC host had murdered an intern back when he was a Florida congressman.

Hannity has been particularly sensitive to speculation about Trump's mental health, claiming in August that commentators on other cable networks have thrown away their journalistic credibility.

“Just when you thought they couldn’t go any lower, this is the new standard on CNN, NBC — which, apparently they don’t have standards anymore,” Hannity said after playing a clip of various cable hosts and commentators arguing that the president had exhibited troubling behavior.

Last year, however, Hannity had no problem with wild speculation about Hillary Clinton's health. He claimed she'd had a stroke, and repeatedly argued that a small video snippet of Clinton laughing sarcastically was actually proof she'd had a "mini-seizure." He even asserted that Clinton had Parkinson's disease.

Alex Jones, Hannity's rival in conspiracy conservatism, and his Infowars team have also been outraged at the idea of questioning Trump's physical fitness for office. Last year, however, Jones and his colleagues hyped numerous unsupported stories about Clinton suffering health problems. Like Hannity, they argued that Clinton might be suffering from Parkinson's disease, but they also claimed that a Secret Service official had told them Clinton suffers seizures from camera flashes, asserted that she might have a brain tumor, said that Clinton required injections to treat seizures, and suggested she might have epilepsy or syphilis. The site even wondered if Clinton might die before Election Day or be forced to drop out of the race for health reasons.

Now, however, Jones and Infowars are outraged that anyone would talk about Trump's health.

In May, Jones told viewers that Democrats and the "Deep State" might try to remove Trump from office by manufacturing false information that Trump had developed dementia. (The "Deep State" has overtaken the "New World Order" as the far right's preferred term for a secret global government that runs everything from behind the scenes.)

"They could not beat him at the ballot box so now they seek to remove him by claiming that he is insane," frequent Infowars guest and Trump friend Roger Stone warned. "He is our last best hope for the survival of the United States and the U.S. Constitution."

Jones' ire at unsupported claims about Trump's health is hypocritical not just because of his repeated smears of Clinton but also because Jones himself has directly speculated about Trump's apparent slurring of words. In September, the radio host claimed that Trump's behavior might be because the president had been drugged by nefarious actors affiliated with the mysterious "Deep State."

"I’ve talked to people, multiple ones, and they believe that they are putting a slow sedative that they’re building up that’s also addictive in his Diet Cokes and in his iced tea and that the president by 6 or 7 at night is basically slurring his words and is drugged," Jones asserted.

He continued: "But yes, ladies and gentlemen, I’ve talked to people that talk to the president now at 9 at night, he is slurring his words. And I’m going to leave it at that. I’ve talked to folks that have talked to him directly."