"The Disaster Artist": Why does America insist on celebrating the hard work of the talentless? 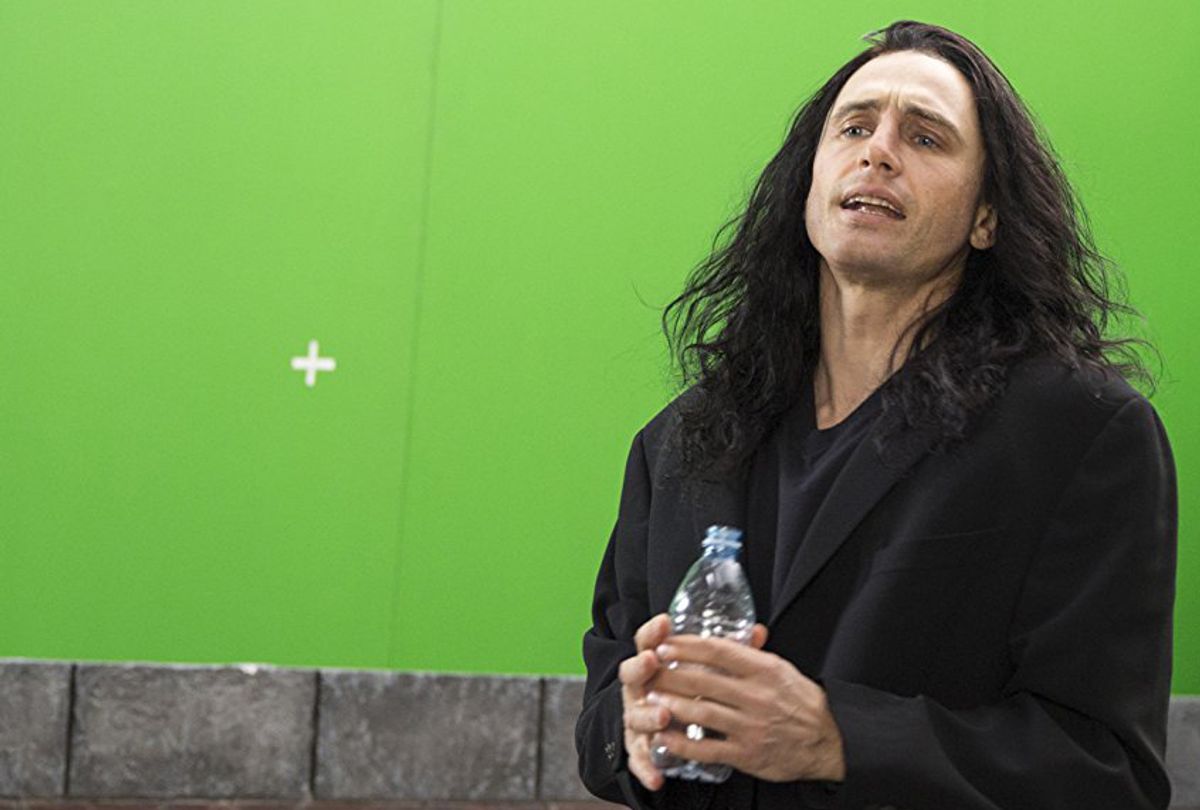 When Tommy Wiseau, the auteur behind the notorious “best worst movie ever,” “The Room” (2003), appeared on “Jimmy Kimmel Live!” last week, he carried himself with the air of a rock star. He wore his trademark black sport sunglasses, multiple leather studded belts, a matching leather studded bracelet, dark jeans, a shiny blue tie and a silky black vest. Wiseau has Captain Hook hair and Gene Simmons skin, and his introduction was followed by thundering electric guitar chords. When Wiseau walked onto the stage, he immediately raised his arms in a Christ-like position that read, “It’s good to be back” (he’s never appeared on “Kimmel” before).

The occasion for Wiseau’s appearance was the release of James Franco’s “The Disaster Artist,” a comedic retelling of Greg Sestero (Dave Franco) and Tommy Wiseau’s (James Franco) road to making “The Room.” When Wiseau walked onto the stage, James Franco was already there, having spent the previous segment talking to Kimmel a little bit about the film and a lot about the mysterious Wiseau.

Though Wiseau projected rock star, to the viewer at home he came off as more of a circus freak. It was evident that Franco was trying to be nice, but he and Kimmel couldn’t help laughing at Wiseau’s antics (such as the menacing billboard he created to promote the film) and at the fact that there’s no other way to describe “The Room” than terrible. The juxtaposition between the clean-cut Kimmel and Franco, who were each wearing crisp charcoal suits and subtly beautiful ties, and the audaciously dressed, slightly unkempt Wiseau heightened the exploitative dynamic: Wiseau was being let into the Hollywood cool kids club, but only for their amusement.

That being said, Wiseau is not some poor, helpless victim. He had the millions of dollars it took to finance “The Room,” and its cult status led him to net a significant profit. He has embraced being the worst, and it has earned him both fame and fortune. And yet, when I watched “The Disaster Artist,” I was left feeling conflicted about Wiseau.

Largely, I felt a sense of guilt because of the earnestness Franco infuses into the character. I hadn’t seen “The Room” prior to seeing “The Disaster Artist,” but I had seen classics like “Retardead” and “Bear.” And as singular as “The Room” may be, if you’ve seen any comedically bad movie, to some extent you’ve seen them all: The stories and actors may be different, but the general soapy aesthetic and ironic audience experience is basically the same. And so, my assumption had always been that the people who made these movies had some sense of what they were doing, that someone had discovered that there’s a big stoned-teen market for this kind of schlock, and proceeded to produce endless masterful crapola (most of which can be found in supermarkets or VOD services).

But “The Disaster Artist” tells another story. Greg aspired to be James Dean, Tommy had notions that he was Hitchcock, and they both, at least at the start, genuinely thought they were making something special.

Though Franco’s film posits that what they created was indeed special — a legitimate hit that has brought endless joy to audiences — it doesn’t try to complicate the talents of this pair. The very first scene finds Greg and Tommy, then strangers to each other, at an acting class where they put on two different kinds of awful performances. Greg, a shy suburban kid with frosted tips, is too nervous to really perform. Tommy, who has a hint of deaf Borat in his “New Orleans” accent, has the opposite problem: He lacks any self-awareness and he is completely over-the-top and melodramatic, quick to writhe on the floor.

Though Greg and Tommy’s lack of talent is never in question, you can see how they fool themselves. Greg, who is the point-of-view character, is handsome and, unlike Tommy, utterly normal; there’s some sense that maybe under the right circumstances, if he could just learn to act a little, Hollywood might give him his moment — like it’s done for Armie Hammer, say. Tommy, on the other hand, is like Rupert Pupkin: a little bit unhinged, utterly delusional and so desperate to be a star that nothing else matters.

Early in the film, Greg and Tommy make a pact that they’ll each never let each other lose sight of their dream. But months into their move to Los Angeles, they have made little headway. Greg gets an agent and lands auditions, but he doesn’t bank any roles. Tommy, on the other hand, is widely laughed at and occasionally advised to pursue a career as a villainous character actor, to which he gets offended. “I hero, you all villain. . . . Yeah, you laugh at the hero. That what villain do.”

It’s when Greg and Tommy are on the verge of giving up that they have their bright idea: Tommy should write his own movie. The production, of course, is a debacle. Tommy harasses his crew and actors, and they laugh at him behind his back. Unsurprisingly, the finished product is laughable.

In “The Disaster Artist,” the premiere of “The Room” acts as a climax. The audience gets the film in a way that its creator doesn’t. “The Room” wasn’t meant to be a comedy, but everyone laughs at it. Tommy is initially heartbroken at the reaction. He feels like everyone is laughing at him, which they are. There’s a world where he’s a tragic character, someone who earnestly pursues a dream America has sold him, but is constantly laughed at in his pursuit. In this world, we’re all villains for laughing.

Instead, Tommy Wiseau is left having the last laugh. The film has netted a profit of several million dollars and has made him a minor celebrity — enough to warrant his “Kimmel” appearance. Wiseau is a Frankenstein born of the same American experiment that yielded the Donald Trump presidency. That is not to say that Wiseau himself has been a malignant force. But coming in this moment, “The Disaster Artist” forces viewers to interrogate their relationship with characters like Tommy Wiseau. What does it say about us that a person — usually a white man — can get so far by being so bad?

After the film ended, I thought back to a scene early in the film, where Tommy and Greg are tossing around a football. Tommy, who is as bad with the football as he is at acting, punts the ball into the ground, and, without any trace of irony, exclaims, “Touchdown!” Greg is the audience’s conduit, and he doesn’t say anything. He just lets Tommy think he’s scored a touchdown. And so, really, who’s to say he didn’t?