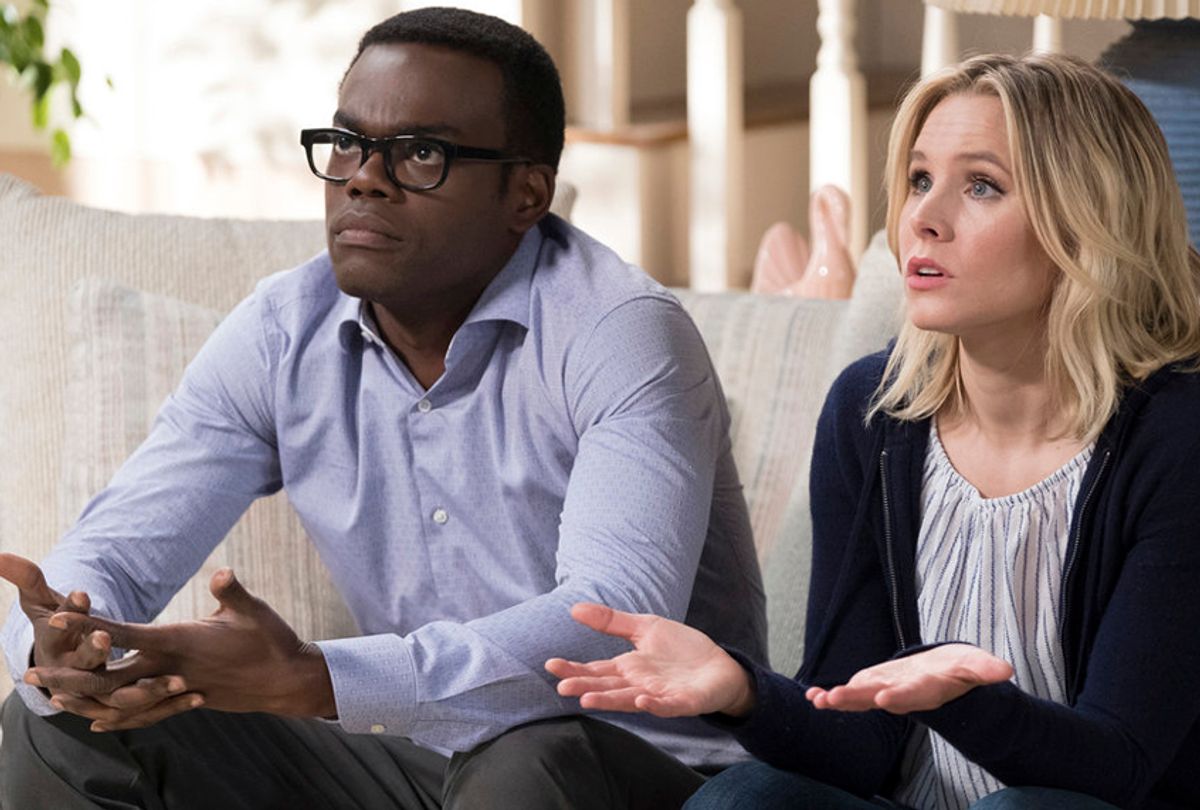 “The Trolley Problem” is type of episode a person recommends to demonstrate to an uninitiated potential viewer what’s best about the series in question —“The Good Place,” in this case — and, just maybe, to call attention to their own cleverness. It refers to a thought experiment that asks a person to choose between saving five people in danger of being killed by a trolley by switching tracks and killing one person on the other side, or allowing the train to continue on its course.

In this comedy set in the afterlife a former professor of moral philosophy, Chidi (William Jackson Harper), attempts to explain the concept to the otherworldly architect of The Good Place, Michael (Ted Danson), as the central point of an ethics lesson.

The question illustrates two ethical viewpoints: utilitarianism, doing the greatest good for as many people as possible, and deontology, doing as much good as possible while being conscious of the actions taken to do it. This is not a concept I knew off the top of my head, by the way. My husband the philosophy buff had to explain it to me while we watched it.

I tuned him out, though, because I was more delighted by the all-powerful Michael’s reaction. Professing to be unclear on the lesson he created a reenactment of the problem for Chidi, himself and Chidi’s soul-mate Eleanor Shellstrop (Kristen Bell) to experience in all its variations. The trolley would kill five, spare one, and reset. The trolley would kill the single person, save the five, and reset.

Then Michael spices it up: What if he knew the guy on the other track? How about if it were five Shakespeares? Each time the simulated victims would explode a shower of blood and guts all over a Chidi shocked into silence. It was a tremendous sight gag that would have gone on forever if Eleanor hadn’t figure out that Michael wasn’t learning any lessons about being good at all. He was torturing Chidi and figuring out how long he could push it until he got caught.

In that a single broad stroke “The Good Place” thrilled the philosophy nerd sitting next to me while incapacitating me, a couch potato for whom Jean-Paul Sartre’s play “No Exit” in high school represents the extent of my philosophy education, with belly-bruising laughter.

This current season begins with Michael’s multiple attempts to compensate for his failed experiment in season 1 by resetting The Good Place countless times, wiping everyone’s memory, including that of Janet (breakout star D’Arcy Carden), the afterlife community’s all-knowing virtual resource. Each time Eleanor proves savvy enough to spot Michael’s game, and eventually she persuades him to join her, Chidi and their companions in the afterlife, Tahani (Jameela Jamil) and Jianyu (Manny Jacinto), to learn how to become better people.

“No Exit” sticks in the memory due to Sartre’s spiffy philosophical conclusion-as-catchphrase: “Hell is other people.” That’s the driving proposal of “The Good Place,” particularly in season two. But Sartre didn’t get it completely right. In reality, our reality, Hell is other people banging on the reset button in an attempt to rewrite the world’s story in the way they see fit.

We’re coming off of a week in which a Democratic Senator was pressured to resign due to multiple allegations of groping women while the president, a Republican who boasted of sexual assault, remains in office. Where another Democrat, a congressman accused of harassment, announced his retirement while a Republican Senate candidate accused of child molestation by multiple women received the endorsement of his party, and went on to publicly claim that America was better during the slavery era.

All of this has led to uncomfortable conversations about moral equivalency among people of good will. Should the accusation of groping be treated with the same weight as accusations, substantiated with evidence and corroborating accounts, of sexual impropriety? Is it politically worthwhile for a party that’s isn’t in power to take the moral high ground while their rivals who have the numbers abandon their morals to push their agenda in law?

If a viewer wants to hit the off button on all of that, can you blame her?

Time and again this year I’ve offered “The Good Place” for its quality and easy of entry, but also for its medicinal value. Season 1 and what has aired of the current season thus far are streaming online and available to Hulu subscribers. With each episode clocking in at 30 minutes, getting up to speed doesn't require much of a time commitment.

Michael Schur, its creator, employs the same optimistic goofy streak that powers Fox’s underrated but reliably enjoyable “Brooklyn Nine-Nine,” a style he honed as executive producer of “Parks and Recreation.”

But “The Good Place” provides a higher service than simple escapism via laughter by exploring what it means to be good, with purpose and devoid of religion or dogma, merely by promoting the merit of being ethical in an increasingly unethical world.

Schur strategically chooses to do this by making the least ethical people the center of the story and writing them as the most relatable of the ensemble.

Chidi is unquestionably the best person of the bunch but serves best as a straight man; Tahani (Jameela Jamil), the celebrated do-gooder of the group, is insufferable; and Jianyu (Manny Jacinto) has the intellect of a lint ball. That leaves Eleanor as our Virgil, a woman on the meaner side of average: she’s selfish because learned early in life that she couldn’t rely on anybody else, and that the point of living is to get as much out of life as possible for as little effort as possible. She’s at once smart but willfully ignorant of knowledge, consequences and the effect of her actions on other people.  And Bell makes it impossible to dislike her.

If events leading to our current situation have proven nothing else, it’s that the average American is more like Eleanor than Chidi. That also makes watching “The Good Place” something of a hopeful experience. If Eleanor or Michael can figure out how to be  more considerate souls – even if it’s for the self-serving goal of being spared an eternity of torture, or even if it takes writing “People = Good” on a chalkboard over and over again – why can’t any other wayward person?

Schur intentionally conceptualized the central thesis of “The Good Place” to be agnostic, bucking the trends of series past and present that draw stories out of humans interacting with angels.  Michael appears to be all-powerful, but he’s not God, or even an angel. He also has other omnipotent beings holding him accountable for his actions and expecting results, making “The Good Place” more of a workplace comedy than anything else.

In Season 1 "The Good Place" skewered the idea of a morality points system while in the second season episodes that aired prior to the show’s midwinter hiatus a character nearly destroyed their existence by lying to herself, of all things. And as touchy feely as that reads Schur and the writers shape the comedy to emphasize surreal camp above everything else, without coming across as pointless or gutless.

The show doesn’t shy away from mind-blowing evil twists, mind you. In fact "The Good Place" is the only comedy that I can’t discuss in depth with new viewers until they’ve watched it from the very beginning, taken in the first season finale and digested all the unexpected developments that have emerged up until now. So yes, now is a great time to catch up, whether as a diversion or to brush up on the basics of How to Be Good.