Trump appears delusional — but the modern-day GOP led the way

Donald Trump has taken the Republican tradition of lying to daring new heights. But he had a lot to work with 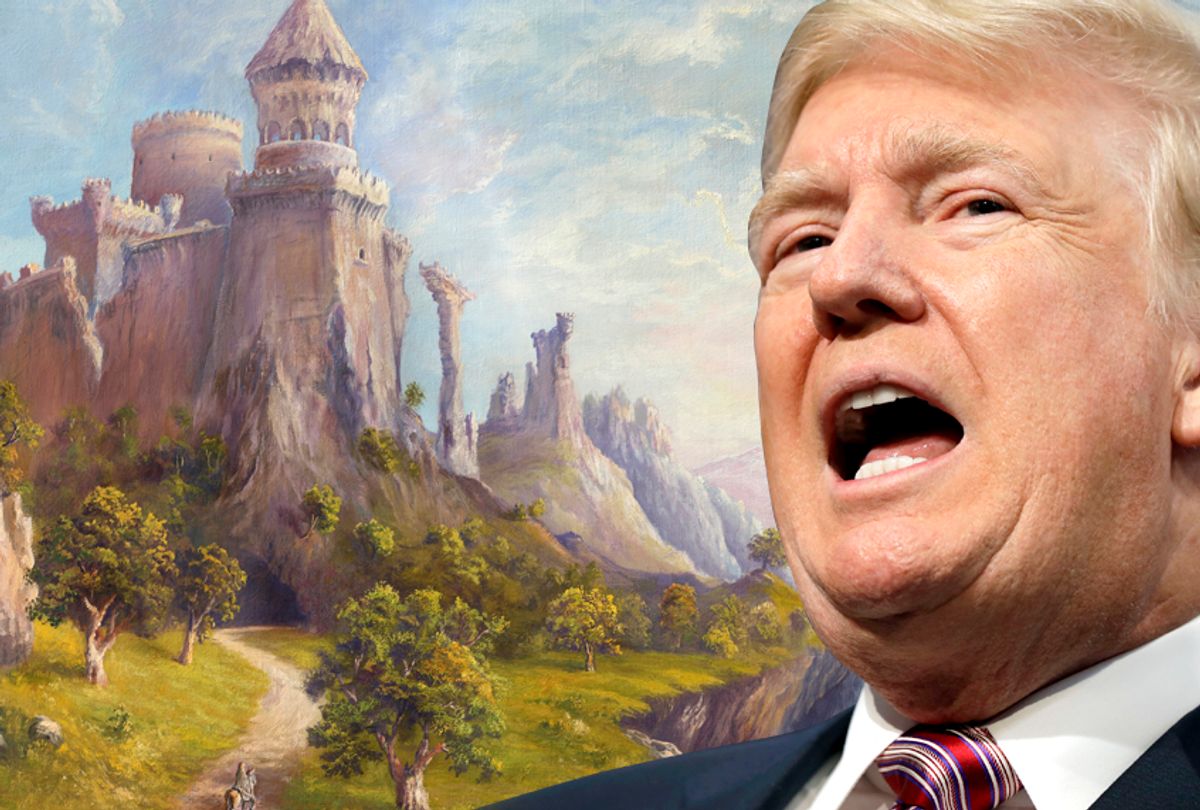 Donald Trump’s tenuous relationship with the truth has always been somewhat of a mystery, and it has often been difficult to tell whether the president is truly delusional or simply the biggest con man on the planet.

Since he announced his presidential candidacy more than two years ago, Trump has peddled conspiracy theories and falsehoods to the public like a false prophet selling hope, displaying an almost pathological disregard for the truth. As a result, many critics have assumed that he is a liar who deliberately and knowingly deceives the public. Others have contemplated whether he truly believes some of the nonsense that come out of his mouth, thus challenging the notion that he is consciously lying.

Both of these scenarios are disturbing in their own way — and, of course, they are not mutually exclusive. Trump may be a true believer one day and a liar the next; a credulous crackpot in one tweet, and a con artist in another.

Last week, however, the New York Times and the Washington Post published separate articles that suggest the president actually believes in his own BS most of the time, and that he has come to live in his own warped version of reality (call it “Trumptopia”). The coinciding reports, published on the same day, both portray the president as an increasingly deranged man who decides what is true and what is false (i.e., “fake news”), regardless of the evidence. According to both articles, the president has even come to question certain things that he had previously acknowledged as true, including the "Access Hollywood" tape in which he is heard bragging to Billy Bush about sexually assaulting women. “We don’t think that was my voice,” Trump reportedly said to a Republican senator in January — a claim he has repeated in private since.

“Mr. Trump’s falsehoods about the ‘Access Hollywood’ tape are part of his lifelong habit of attempting to create and sell his own version of reality,” the New York Times reporters write. “Advisers say he continues to privately harbor a handful of conspiracy theories that have no grounding in fact.”

Some of these conspiracy theories, according to the Times, include the "birther" conspiracy about former President Barack Obama (which Trump has publicly disavowed) and the discredited theory that Trump lost the popular vote to Hillary Clinton last year because of widespread voter fraud. The president’s friends “did not bother denying that the president was creating an alternative version of events,” the Times reports. “One Republican lawmaker, who asked not to be identified, said that Mr. Trump’s false statements had become familiar to people over time.”

The Washington Post article is no less disturbing, and the reporters note that even “when presented with irrefutable evidence, Trump finds a way to question unflattering facts.” Whether it’s his defeat in the popular vote, Robert Mueller's probe into possible Russian campaign collusion or Obama’s birth certificate, Trump doesn’t let concrete facts get in the way of his alternative reality. Peter Wehner, a conservative writer who served in the three previous Republican administrations, told the Post that the president “creates his own reality and lives in his own reality and tries to bend reality around himself and his own deep narcissistic needs.” What makes this especially troubling is the fact that Trump is surrounded by enablers who have simply come to accept his delusional worldview as a kind of harmless idiosyncrasy.

These reports seem to confirm that Trump is often a true believer in the conspiracy theories and falsehoods that he spreads. This is not to say that the president isn’t a liar, which he almost certainly is, but that he has been a bullshit artist for so long that he has come to believe in much of his own bullshit. When one builds his entire career on fabrications and “truthful hyperbole” — a euphemism coined by Trump himself — it is not surprising that he eventually comes to believe the hype (especially when surrounded by sycophants who would gladly bend the knee and call him “Your Majesty” upon request).

It is slightly more surprising that a deluded conspiracy theorist like Trump could vanquish numerous Republican opponents and then win the general election without facing any repercussions for his repeated transgressions against the truth. But it shouldn’t be. The GOP was the party of “alternative facts” long before it became the party of Trump, and conspiracy theorists took over the conservative movement long before Trump launched his campaign. Trump’s meteoric rise wouldn’t have been possible without a longstanding tradition of bullshit and paranoia on the right.

Right-wingers have historically been more susceptible to conspiracy theories and paranoia than liberals and leftists. When the historian Richard Hofstadter wrote his seminal essay “The Paranoid Style in American Politics” in 1964, it was Trump’s antecedents in the John Birch Society who were espousing elaborate conspiracy theories about the communist takeover of the government. One explanation for this excessive paranoia is the fact that conservatives are driven more by fear than their liberal counterparts. This has been demonstrated by various peer-reviewed studies over the years, including those conducted by Yale psychology professor John Bargh, who found that inducing “feelings of complete physical safety” in conservatives made them more likely to express liberal viewpoints.

Even though some on the left have become increasingly paranoid and hysterical since last year’s election, right-wingers remain the leading purveyors of conspiratorial nonsense in the age of Trump. This is partly due to the president’s inability to get anything passed by Congress, coupled with the endless scandals that have plagued his administration. Failing to accomplish even a fraction of what he promised, the president and his defenders deny reality and blame their problems on evil conspirators, whether that means "deep state" agents, the “fake news” media or the globalist elite. In his essay on the paranoid style, Hofstadter observed that paranoids have hopelessly unrealistic goals and, because these goals are unattainable, “failure constantly heightens the paranoid’s sense of frustration.”

“Even partial success,” he writes, “leaves [the paranoid] with the same feeling of powerlessness with which he began, and this in turn only strengthens his awareness of the vast and terrifying quality of the enemy he opposes.”

Not all Republicans are full-blown conspiracy theorists, of course, and a number of prominent party leaders have disavowed Trump’s conspiracy-peddling on various occasions. But all Republicans are, to varying degrees, committed to “alternative facts.” This is because modern conservatism is an ideology that was built on them.

Consider the Republican tax bill and the trickle-down dogma that has been employed to defend it. The basic assumption has been that slashing taxes on corporations and the ultra-rich will stimulate the economy to such a degree that the changes will be deficit-neutral and the newly created wealth will trickle down to the middle class. “I’m totally confident this is a revenue-neutral bill. Actually a revenue producer,” declared Senate Majority Leader Mitch McConnell after passing the legislation.

According to the nonpartisan Joint Committee on Taxation, this is simply untrue. The bill is estimated to add around $1 trillion to the debt over the next decade, and that's after accounting for economic growth. Republicans have claimed that the tax cuts will essentially pay for themselves, but this is very much an alternative fact. Likewise, the notion of wealth trickling down has been discredited time and again over the past 40 years, going back to Ronald Reagan’s 1981 tax cuts. But this has done nothing to alter the Republican Party’s supply-side convictions (not even Gov. Sam Brownback’s disastrous supply-side experiment in Kansas could do that).

This is just the tip of the iceberg. The Republican Party as a whole is hostile to the truth, just like Donald Trump’s administration. Yet facts no longer seem to carry the same weight that they once did. Daniel Patrick Moynihan’s famous maxim — “You are entitled to your opinion, but you are not entitled to your own facts” — seems rather quaint in the post-truth era of Trump.

Still, as the president’s delusions continue to multiply, it may become too much even for some Republicans to bear. The difference between an ordinary Republican and Trump is that the former’s delusions revolve around his or her ideology, while the president’s revolve around his narcissistic personality. Trump’s falsehoods are easier to spot, therefore, because they are often so flagrant and petty, while the lies of conservatism are propped up by a massive propaganda machine, with right-wing think-tanks, media organizations and political action committees all devoted to refuting reality.

Republicans have become exceptionally tolerant of bullshit, but Trump’s bullshit has come to be a problem. It is so brazen and transparent that it has revealed how little the party actually cares about the truth — just as Trump’s racist and xenophobic rhetoric revealed the deep-seated racism within the Republican electorate. One can only spurn reality for so long before it finally takes its revenge, although one suspects this president will go to his grave convinced that he will live forever.