Trump and Jerusalem: Will his "hard power" realism backfire bigly?

Like much of Trump's foreign policy, the Jerusalem decision recognizes ugly facts about the U.S. role in the world 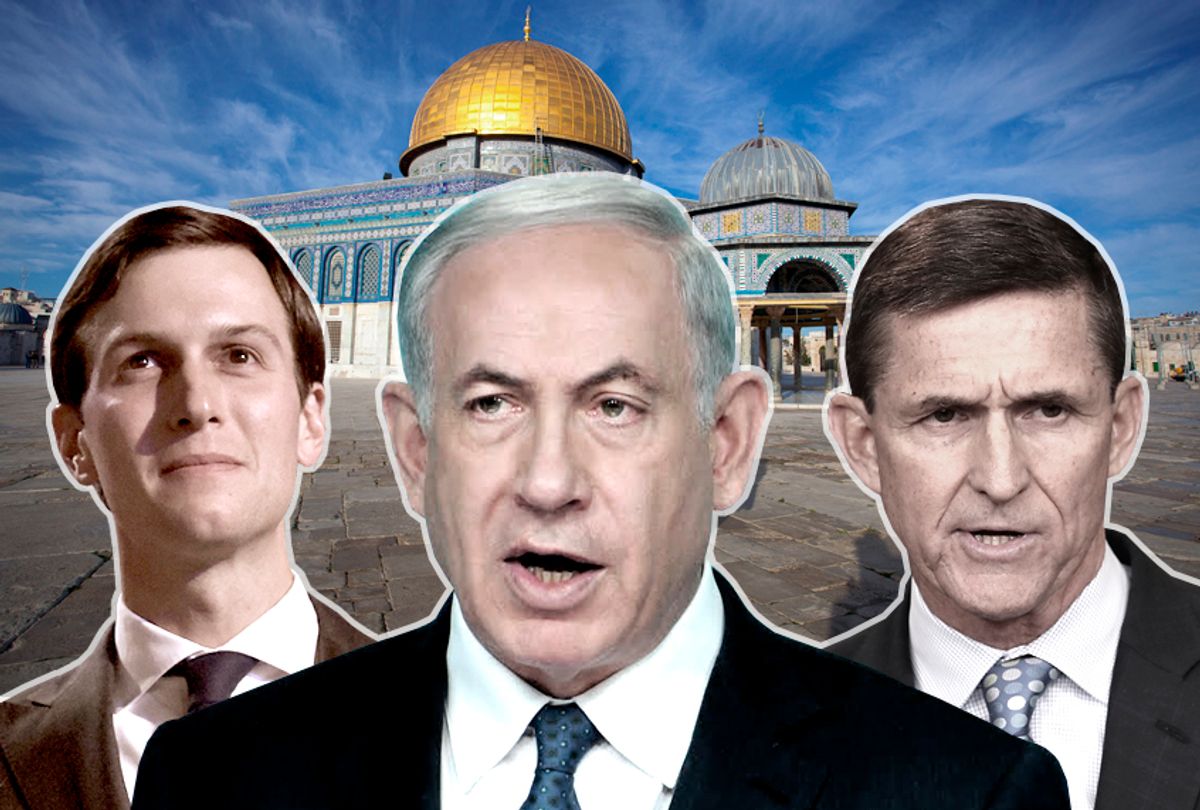 Clarity is preferable to ambiguity even when the clear picture is grim. So I have found in many circumstances, and so I find it now that President Trump declares his intention to recognize Jerusalem as Israel’s capital and, in all likelihood, move the United States embassy there from Tel Aviv. It is a monumentally miscalculated move from numerous perspectives, but so is nearly everything else the U.S. does in the Middle East. If this is multiple failures in the making, as I judge it, at least now Washington’s intentions are plain for all to see.

Let us consider these intentions, then. If there is any surprise in them, it is how long Washington has managed to dupe so many as to its goals in the Middle East. There are many ways to date the essential pose, but we can trace it conservatively to 1957, when President Dwight Eisenhower asserted America’s right to intervene militarily in the Middle East in the name of national security. There is a straight line between Eisenhower’s declaration 60 years ago and Trump’s last week. As is his wont, Trump has merely stated the case as it is.

The first of Trump’s intentions, as I rate them, reflects Washington’s obsession with Iran’s emergence as a Middle Eastern power — which, I ought to note straightaway, I consider inevitable and net-positive, by a long way, given Tehran’s demonstrable desire for regional stability and security. Iran presents one of two new challenges to Washington’s longstanding influence in the Middle East. Russia presents the other, and both have gone critical with the Islamic State’s demise in Iraq and Syria. By recognizing Jerusalem, the administration cements its place in a swiftly consolidating alliance wherein Sunni-nationalist monarchies led by Saudi Arabia make common cause with Israel to contain Iran. The Saudis are clear they are willing to go to war to achieve this end.

While a resolution of the Israel–Palestine question is less urgent than it once was, pitifully enough, it is self-evidently still a problem for the U.S. and Israel. Now, after decades of transparently insincere effort, Trump (if not all of Washington) sees a chance to force Palestinians to accept a final settlement that leaves them stateless, as they are now, in all but name. “There will be no contiguous Palestinian state and no sovereignty,” Phyllis Bennis, a director at the Institute for Policy Studies in Washington and a longtime student of the Mideast conflict, said on the telephone the other day. “We should be under no illusions about this.”

Trump has, finally, political obligations at home to meet. A president under siege has a campaign promise to keep — we are to watch now for “the ultimate deal” — and donors to please. Among these are vigorously active supporters of Israel such as Sheldon Adelson, the casino operator, and their allies among Christian evangelicals. Congress passed legislation mandating the embassy transfer in the mid–1990s. This gave Trump his opening but also his out: He mollified his political and financial creditors when he recognized Jerusalem last week, but also bought time when he then signed another in a long succession of six-month waivers, also mandated by Congress, that defers the embassy move.

Containing Iran, forcing Palestinians into legal apartheid, paying off cheap political debts with Palestinian aspirations: These are Trump’s three intentions as I read last week’s move. But let us not subtract history and make the mistake of assuming that Trump alone is responsible for this new state of affairs. “This is nothing more or less than a recognition of reality,” Trump said in explaining his decision last Wednesday. This is perfectly true — truer, indeed, than the rest of Washington wishes it to be.

Here are four of these realities:

I do not consider the above to be overstatements. Think about Congress’ 1995 mandate to transfer the embassy to Jerusalem: The U.S. has had legislation on its books for 22 years in direct contravention of two U.N. Security Council resolutions (242 and 2334) that are universally recognized as international law. If this is not an assertion of American prerogative above all international norms, I cannot think of what might be. Isn’t it fair to say Trump has merely brought into the open as policy what has been partially obscured?

We should be clear about these matters now. And one other.

Washington is now openly in alliance with Persian Gulf Wahhabists and Benjamin Netanyahu’s Likud-dominated Israel — two sets of unwholesome extremists. The mode of operation here, as just noted, is the expedient exercise of sheer power, nothing more. I do not think anyone knows what will come of this strategy. There could be near-term successes, depending on what one means by the term. The reality to be recognized is this: The course now set is an admission of failure in itself, and other failures will come of it.

As all predicted, Trump’s decision immediately prompted protests in the West Bank, Gaza and elsewhere in the Middle East. Hamas, which governs the Gaza Strip, called Thursday for a new intifada “in the face of the Zionist enemy.” It is too early to say what will come of these popular demonstrations. Given that Trump seemed to anticipate them in the very speech announcing his decision — “There will, of course, be disagreement and dissent” — I detect a calculated gamble on the administration’s part.

Part A: There is no question that Jerusalem and the fate of the Palestinians remains of great symbolic significance and concern to Muslims the world over. They are still paying attention. Part B: Neither is there any question that the Middle East’s ruling regimes have derogated the Palestinian cause over many years to a lesser place on their agendas. Read the statements from the Saudis, for instance. “The U.S. move represents a significant decline in efforts to push a peace process and is a violation of the historically neutral American position on Jerusalem,” King Salman said. This is closer to mere observation than a declaration of the Saudi position. Other nations responded similarly.

The administration’s bet, if I read it correctly, is in keeping with its new power-without-disguises posture in the Middle East. In effect, it is to rely on continuing, if not increased, political repression among Washington’s despotic allies to contain whatever new wave of popular arousal on behalf of Palestinians may now materialize. Will such a strategy work? This is our question.

Hard power is … very hard, and no one should entertain any illusions on this point. But there is an interesting counter-argument. Richard Falk, the noted international-relations writer and formerly the U.N.’s special rapporteur on Palestinian rights, talks often of “legitimacy struggles” and “legitimacy wars,” wherein the weaker side militarily ultimately triumphs because it is legally and morally right. This knowledge powers all manner of civic action. In Palestine’s case, Falk points to the campaign for diplomatic recognition and the accumulating momentum of the boycott, disinvestment and sanctions movement, known as BDS.

I find a danger of idealism in Falk’s argument, but I am also impressed when he offers Vietnam and apartheid South Africa as examples of what he means. “Until World War II, hard power prevailed,” he said in a conversation last week. “It hasn’t since. Varieties of soft power have. The record is clear on this point.”

My answer to the question: Trump’s is a hard-power strategy, no adornments. He may be right that allied regimes will suppress all signs of revolt in behalf of Palestinians, but in dispensing with “hearts and minds” he stands to make many more enemies. In this he will merely add to the disgraceful dimension of anti–American sentiment most polls taken in the region indicate. It is a failure in itself and at some point is likely to produce failures of greater consequence.

Ten days before Trump recognized Jerusalem as Israel’s capital, you may have noticed, the administration announced that it would shut down the Palestine Liberation Organization’s Washington office if the PLO leadership did not agree to new negotiations in a framework Washington dictates. We do not need any clearer signal as to what is likely to come next. Phyllis Bennis expects Jared Kushner, Trump’s son-in-law and point man in the Mideast crisis, to announce (probably within a few months) that Washington will sponsor a new round of talks. If it fails to find pliant Palestinians to participate, popular support or no, it will simply impose its intended arrangement, Bennis thinks.

Knowing this stuff cold, Bennis offers a forecast of the outcome that could hardly be grimmer. In her estimation, Palestinians will be left with 35 percent to 40 percent of West Bank territory. Bantustan-like zones will have no borders in the ordinary way nations do, and no control of foreign affairs, defense, water and other such things. All six of the West Bank’s major aquifers will lie on the Israeli side.

“They will call this a two-state solution,” Bennis said, "but it’ll be essentially the status quo — one state, an apartheid state.” Bennis reminded me as we signed off, “This is a failure of U.S. policy, although not a new failure.”

I agree with her. Push through anything like what she predicts as a final settlement, and Trump will etch a deep scar — yet another — into the record of American foreign policy. As so often before Trump ever came along, Washington’s "success" will not look anything like one.