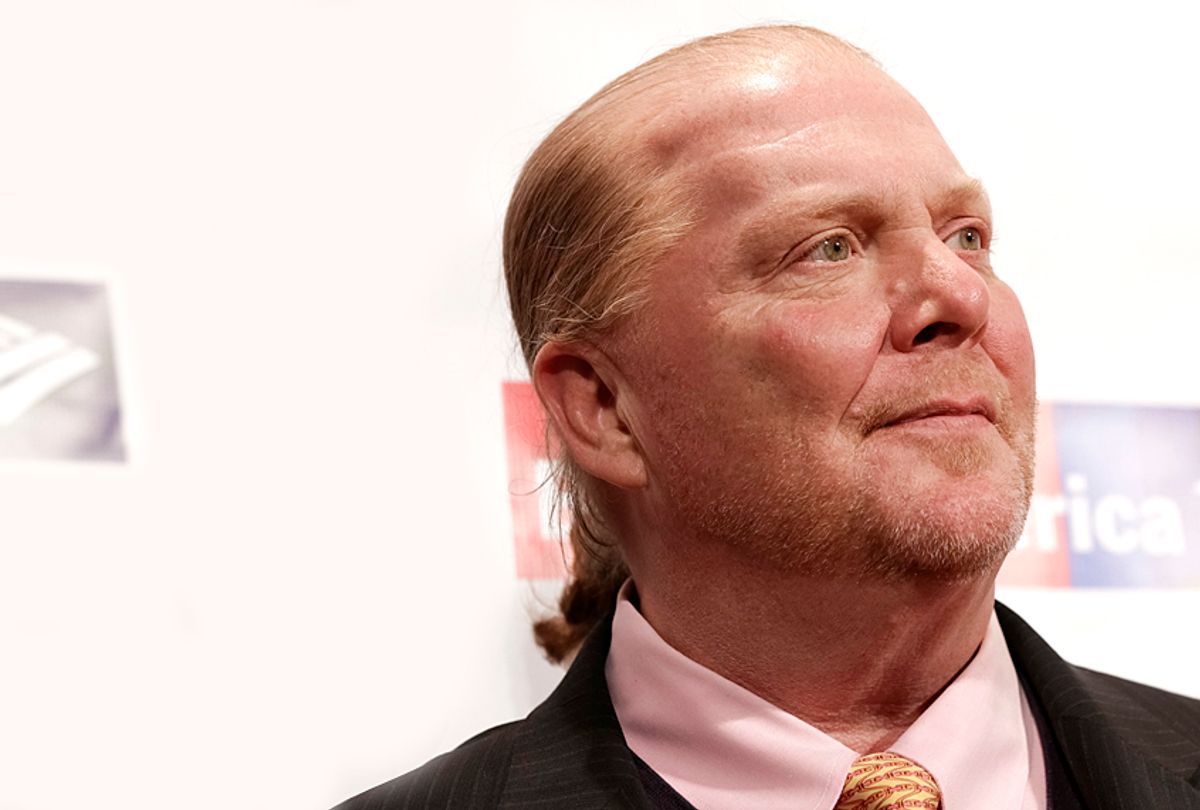 Mario Batali is stepping down from his restaurant empire and his ABC show after allegations of sexual misconduct against the celebrity chef and media personality surfaced in the media. The accusations span over two decades, according to an investigation by Eater. In a statement, Batali apologized for his actions and mistreatment and said "much of the behavior described does, in fact, match up with ways I have acted."

One chef says she met Batali one night while he was clearly intoxicated. After someone bumped her glass and spilled wine on her chest, she alleges that Batali "began rubbing her breasts with his bare hands while saying something like, 'Let me help you with that,' as he groped her chest," Eater reports.

Three other woman chefs, two of which were former employees of Batali's, claims he constantly groped them, grabbed their breasts or pressed his body against theirs. According to Eater,Batali was admonished for inappropriate behavior just two months ago.

"That behavior was wrong and there are no excuses," Batali says in his statement. "I take full responsibility and am deeply sorry for any pain, humiliation or discomfort I have caused to my peers, employees, customers, friends and family."

"I am going to step away from day-to-day operations of my businesses," he continued. "We built these restaurants so that our guests could have fun and indulge, but I took that too far in my own behavior."

But Batali will remain as owner of his restaurants. A B&B spokesperson said in a statement to Eater, "We take these allegations very seriously," and added, "We have strong policies and practices in place that address sexual harassment. We train employees in these policies and we enforce them, up to and including termination." The spokesperson confirmed Batali's departure from day-to-day operations at the restaurants.

In a separate statement, a spokesperson from ABC said, "While we are unaware of any type of inappropriate behavior involving him and anyone affiliated with the show, we will swiftly address any alleged violations of our standards of conduct."

The women who spoke to Eater and describe claims of sexual misconduct remain anonymous, and told the website that they were scared to come forward because of retribution and Batali's power. "Eater is granting them anonymity but has corroborated their stories with friends, family members, or colleagues who were informed of the incidents, as well as with publicly available information," the publication reported.

Like many of the stories of sexual misconduct coming from various industries, Batali's alleged behavior towards women was known in limited circles. Women describe repeated harassment and abuse from Batali, and if another chef tried to step in and get Batali to stop, he would become aggressive. "This was about asserting power," a former server alleging sexual misconduct told Eater.

Considered an expert in Italian cuisine, Batali co-owns restaurants in many major cities in the U.S., including Boston, New York City, Los Angeles, Las Vegas and one in Singapore. Batali founded B&B Hospitality Group with Joe Bastianich and together they opened numerous critically acclaimed Italian restaurants worldwide. Batali has also made numerous television appearances and authored many cookbooks.