“All of the sudden, he was all over me, kissing and groping,” said one, of the future president 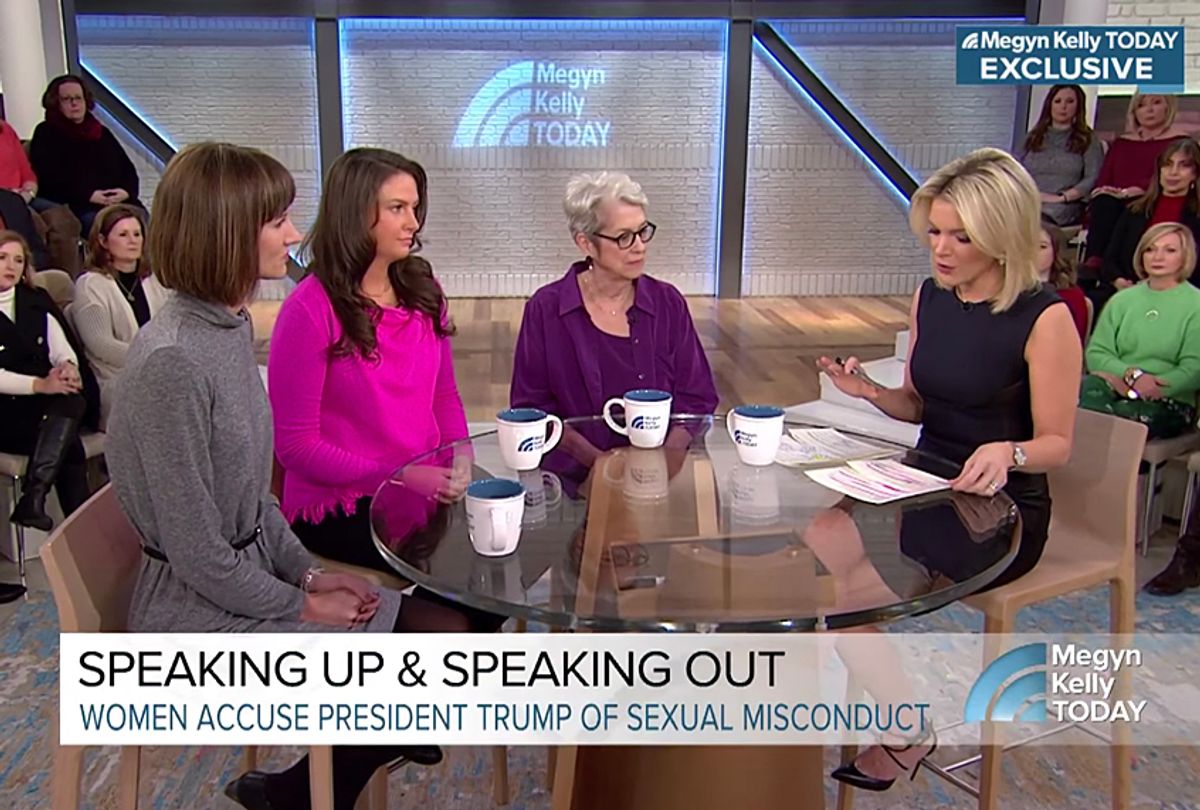 Monday morning, three women who have accused President Donald Trump of various forms of sexual misconduct dating back to before his time as a politician appeared on NBC's "Megyn Kelly Today."

Tied to the ongoing wave of such allegations about powerful men following the exposés about disgraced producer Harvey Weinstein, the show featured Samantha Holvey, Jessica Leeds and Rachel Crooks — all of whom were helping to promote Robert Greenwald's forthcoming documentary about the charges surrounding the president, called "16 Women and Donald Trump." All three recounted at least some elements of their alleged encounters with the future president in what may be the most viewed instance of them doing so up to this point.

Leeds, who claims that Trump groped her while in first class on a commercial airplane in the 1980s said, of the alleged encounter, "All of the sudden he was all over me, kissing and groping,” eventually putting his hand up her skirt. “I managed to wiggle out, she added. "I grabbed my purse and went to the back of the airplane.” She added that when she met Trump again years later, he called her "the c word."

“I would like to see some reckoning," she continued, "that he is not made of Teflon, that he acknowledges in some fashion and is called on to answer for the charges.” At this stage, Trump has completely and vociferously denied her story.

Holvey, who came out with her story about an alleged encounter with Trump during the 2006 Miss USA contest during the 2016 campaign, spoke about the day the former reality star was sworn into office. “It was just a tough day," she said, "because it was like the entire country said, ‘We don’t care that he is like this.'"

She too recounted her allegations, saying that Trump had visited the dressing rooms and backstage areas of the pageant when the contestants were in states of undress. “He comes in like he owns the place and owns you,” she said on "Today." "I was just a piece of meat. I was just simply there for his pleasure."

Crooks, who worked for a company with offices in the president's Trump Tower, recalled the president physically accosting her. After introducing herself to Trump in the building, he kissed her on each cheek, she claimed. “He kissed me on the lips and I was shocked. I ran back into the office and I remember hiding in my boss’s office. I called my sister and said, ‘I don’t know what happened. It is just horrible.'”

The appearances on "Today" mark somewhat of a turn in the long-running debate surrounding the various allegations against the president. Following the rise of the #MeToo movement and the fall of multiple powerful men from Hollywood to the halls of Congress, more individuals in the media and politics are putting pressure on Trump to at least address the allegations with more than just anger and "fake news" claims.

A sign of this rising tide against the president came this weekend when Trump's ambassador to the U.N., Nikki Haley, said during a TV interview that the women accusing him “should be heard, and they should be dealt with." She added, “I think we heard from them prior to the election. And I think any woman who has felt violated or felt mistreated in any way, they have every right to speak up.”

Last week, arguments were heard in a motion to dismiss a defamation lawsuit filed by Summer Zervos against the president in the New York State Supreme Court. Zervos is seeking damages after the then-candidate said that her allegations that he had groped her during a business meeting in 2007 were "lies." Should the case go to trial, the president could be deposed, and testimonies from some of the 18 others who have accused Trump of misconduct could be entered into evidence.

During the campaign, and now through the White House press office, the president has claimed all accusations against him are false and perhaps even part of a larger conspiracy against him.

See the "Today" segment below.