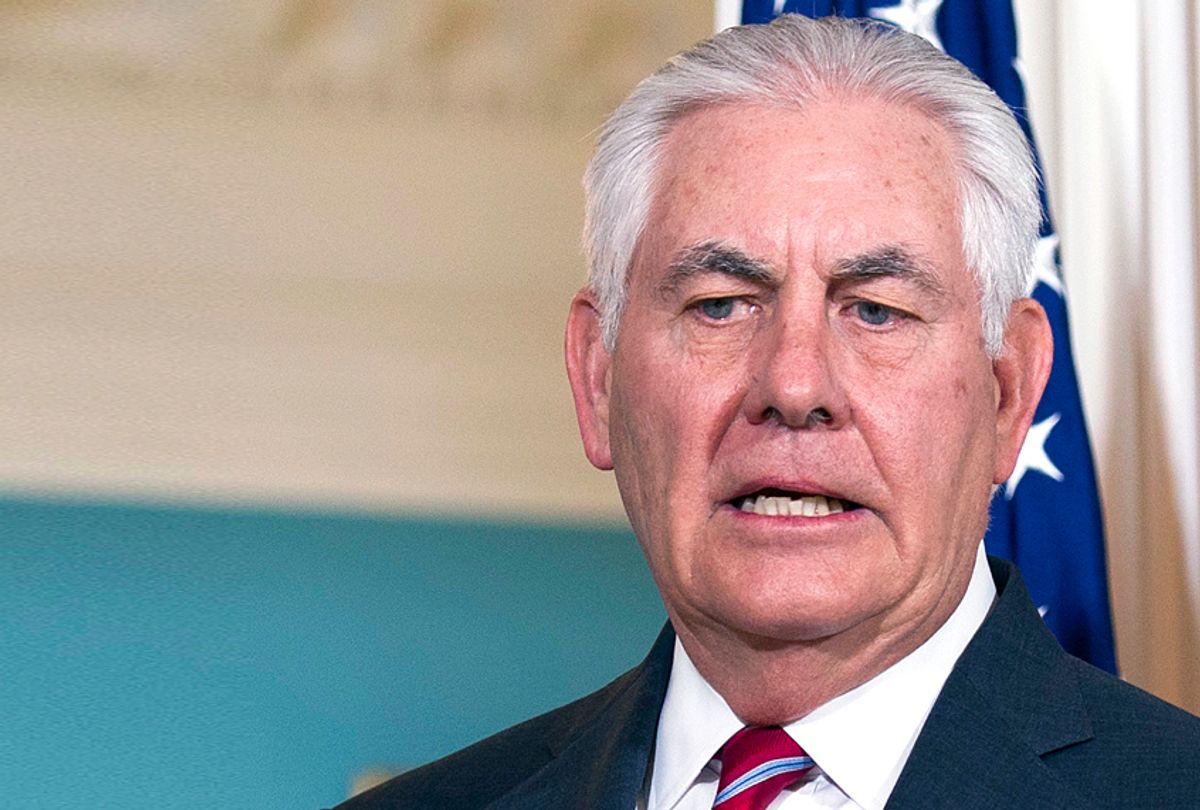 Some State Department staffers celebrated the agency’s holiday party Monday in an empty office suite. “We usually have holiday parties, but never in an entire empty office,” a staffer at the Foggy Bottom headquarters told Salon. (State Department sources in this story have been granted anonymity to protect their employment status.) “It just speaks to how low morale is.”

Ten months after Secretary of State Rex Tillerson took office, a simple holiday anecdote sheds a light on a grim picture for the nation’s diplomatic and foreign policy agency. More than 100 State officials have either resigned or have been fired, as the agency continues to grapple with vacancies across its senior ranks:

According to A.F.S.A., the labor union for the United States Foreign Service, the number of State Department employees that rank as either career ambassador or career minister — the equivalent of four- and three-star generals in the military, respectively — has fallen from 38 to 21 since January. Meanwhile, the number of minister counselors, the two-star commensurate, has dropped dramatically from 431 to 369 since right after Labor Day. Even future generations of foreign-service officers have taken a hit; the number of applicants registering to take the Foreign Service Officer Test this year will be less than half the 17,000 who registered just two years ago.

“A lot of senior-level folks left in the beginning, either to retire or to go to private sector. But most people have stuck around with hopes to outlive the [Trump] administration,” another State Department employee told Salon. “Morale is a lot lower for foreign service or higher level officials, since they’re at the front line of implementing foreign policy or engaging with [Tillerson’s] transition team, who many feel are incompetent.”

As part of President Donald Trump’s wholesale gutting of multiple federal agencies, Tillerson has idly presided over the near-total destruction of the U.S. State Department. On his first day in office, Tillerson implemented a hiring freeze and pledged to downsize the agency of nearly 25,000 full-time American employees by 8 percent, claiming an aim to make it more efficient. The president’s words, coupled with his secretary of state’s inaction throughout the year, has instead undermined years of work within the agency and damaged America’s position as a leader on the world stage, according to both high-ranking diplomats and career staffers in Foggy Bottom.

Elizabeth Shackelford, whom Foreign Policy described as “a rising star at the State Department,” served in South Sudan, Kenya and Poland — and just became the latest diplomat to flee the foreign service under Tillerson.

The State Department is being "diminished," she argued in her resignation letter, in part because of the "stinging disrespect" shown by the Trump administration.

"President Trump's dismissive attitude toward human rights was no surprise following his campaign," Shackelford wrote to Tillerson, "but your May 3 remarks to Department staff shocked many as you called into question the utility of advancing human rights when it proves inconvenient."

Her scathing appraisal of the department under Tillerson continued. "We have ceded to the Pentagon our authority to drive US foreign policy," she noted, "at the behest of the White House, but to our detriment as a nation."

“The cost of this is visible every day in Mission Somalia, my current post, where State’s diplomatic influence, on the country and within our own interagency, is waning,” she said. Shackelford, who most recently worked as a political officer for the U.S. mission to Somalia from a post in Nairobi, received the Barbara Watson Award for Consular Excellence for “extraordinary dedication to protecting American citizens during the South Sudan Crisis” in 2013 and 2014.

“With each passing day, however,” she wrote, “this task grows more futile, driving the Department’s experienced and talented staff away in ever greater numbers.” The “unfilled vacancies and proposed budget and staffing cuts had left the department adrift, with weakened influence inside the administration and on the ground,” she added.

Shackelford called on Tillerson to reverse the exodus of diplomats like her and to stand up for employees of the State Department in a display of “leadership and a commitment to our people, our mission, and our mandate as the foreign policy arm of the United States.”

If you are unable to "stem the bleeding," the resigning foreign service officer told Tillerson, "I would humbly recommend you follow me out the door.”

Shackelford’s last day on the job was Friday.

Tillerson has defended the job he has done and said the department has been in need of a “redesign” to simplify its workforce. But department officials who work under his guidance remain unsure as to what that entails, nearly a year later.

“It has been very slow-going and secretive,” one career staffer told Salon. “And now people are concerned that Tillerson might leave or might be fired before the redesign is complete, meaning we’d have to start all over again.” The State Department has confirmed it will offer a $25,000 buyout to diplomats and staff members who quit or take early retirements by April. Tillerson is set to unveil more details about his department-wide reorganization in an address to State Department staff today. (That event is closed to the press).

Last week, Tillerson said the State Department was "not missing a beat just because we’ve got some nominees that are still working through the process.” When the former ExxonMobil executive offered praise for his agency’s staffers, however, he included this preface: “While we don’t have any wins on the board yet . . .”

Tillerson's tone and demeanor have not gone unnoticed by staffers.

“Tillerson is a definitely different from [Hillary] Clinton or [John] Kerry, who would engage more with the department and its employees,” one employee told Salon. “Tillerson keeps mostly to himself and that has people feeling very offended and upset.”

One possible explanation for Tillerson’s management style could be the stress of this increasingly humiliating year. In October, NBC News reported that he was growing increasingly disenchanted with Trump’s leadership, which forced the secretary to issue a rare statement confirming his intention to remain in the position. Last month, the White House reportedly floated a rumored plan to replace Tillerson with current CIA Director Mike Pompeo (while replacing Pompeo with Sen. Tom Cotton of Arkansas). As Trump declared Jerusalem the capital of Israel last week, Tillerson’s State Department appeared to stand apart. “Nothing in this decision speaks to a final status resolution of the boundaries of sovereignty issues here,” a State Department administration official said, only hours after Trump’s announcement.