Claims of racism dog a Golden Globe-nominated performance, revealing the bias of the accusers 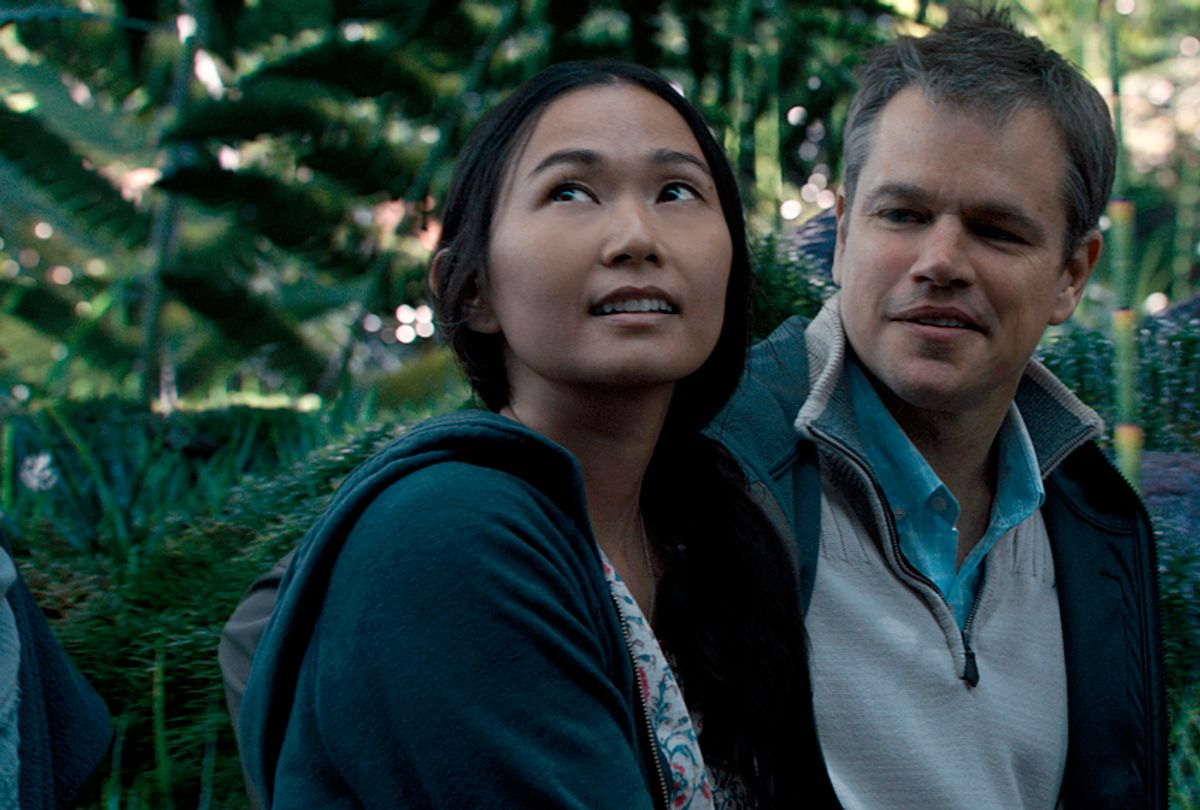 Among the many oversights and bafflements in this year’s announcement for the increasingly-irrelevant Golden Globes — no Best Supporting Actor nod for Daniel Craig’s career-best turn in Soderbergh’s “Logan Lucky”? Next-to-no love at all for Paul Thomas Anderson’s sublime, scary, exquisite “Phantom Thread”? No women nominated for Best Director honors — one nomination stood out, in a good way.

Set in the near future, “Downsizing” imagines a world where people can physically miniaturize themselves in order to reduce their carbon footprint, and drastically increase their own personal wealth in turn. Miniaturized couples and families relocate to luxe gated communities, where a modest accumulated savings can stretch well past retirement. The film follows hapless Midwesterner as Paul Safranek (Matt Damon), drifting though one of these communities alone after his wife (Kristen Wiig) bails on the downsizing procedure at the last second.

Following a rowdy party hosted by two aging Eurotrashy playboys (Christoph Waltz and Udo Kier), Damon’s Safarnek meets Chau’s character, Ngoc Lan Tran, a hobbled Vietnamese activist shrunk by the government against her will, who fled to the United States inside a flatscreen TV box. Beyond her bum leg, Chau’s Tran suffers from another obvious “disability”: her heavily accented English, the result of her being a first generation Vietnamese immigrant and asylum speaker.

I first saw “Downsizing” at the 2017 Toronto International Film Festival. I wasn’t necessarily ga-ga for it (though it has, somewhat ironically I guess, enlarged in my mind the more I think about and discuss it with others). I was, however, immediately dazzled by the boldness of Chau’s performance, and of the way Payne wrote and directed it. In this age of hyper-sensitivity and renewed political correctness, figuring a primary character who scans as a caricature of various Asian-American stereotypes feels so foolish and imprudent as to be brave. Immediately after the screening, my worst fears were confirmed, as I overheard other critics muttering about how Chau’s performance, and her whole character, were “problematic,” even “embarrassing.”

As if often the case these days, such performatively socially-conscious, hysterically correct-thinking reactions strike me as being in totally bad faith.

Yes, of course, there is a history of broad, bad, stereotypical performances of Asian characters in Hollywood. There’s also the equally troubling trend of white-washing, where white actors are made up to present as Asian characters (think of Mickey Rooney in “Breakfast at Tiffany’s” or even John Wayne as Genghis Khan in “The Conqueror”). There is no doubt a troubling trend towards radicalized burlesque. But what’s remarkable about Chau’s character, and her performance, is the way it enlivens, even transcends, such ostensible markers of stereotyping.

For one thing, Tran herself is deeply kind, wise, and driven by more than the crass self-interest that motivates many of the characters in “Downsizing.” And to state the obvious: Chau is a talented actress (and a Thai woman born to Vietnamese parents) who willingly chose to take part in “Downsizing,” to play Tran, and to invest her own talents into the character as written.

What’s more: Chau’s parents fled Vietnam in the 1970s, much like her character in Payne’s movie, which gives her a sense of ownership over such a character. The actress has recently responded to these criticisms, telling the Chicago Tribune, “I'm not quite sure why people are so flabbergasted to hear a person with an accent. We are surrounded by people who speak with accents. We are a nation of immigrants.”

Indeed, what the reaction to “Downsizing” suggests are the real-world growing pains that accompany North America’s increasing reliance on the arrival of non-European immigrants.

A 2010 paper by by University of Chicago psychologists Shiri Lev-Ari and Boaz Keysar, “The Way They Speak: A Social Psychological Perspective on the Stigma of Nonnative Accents in Communication,” delves into psychological and social aspects of accent dissemination , or “accent bias.” It claims that for a native English speaker, for example, densely inflected English demands more work. The brain strains to make sense of it, slowing down what Lev-Air and Keysar term our “cognitive fluency.” This snag in the brain’s ability to process speech is then reflected back on the speaker, who is in turn believed to be of lower intelligence.

In their study, the researchers asked a group of participants to read a series of trivial, matter-of-fact statements for another control group. They found that people with heavy Middle Eastern, European or Asian accents were believed less than those with a more fulsome grasp on the King’s English. Not only are the statements of non-native speakers seen as more difficult to understand, they’re deemed less truthful. Combine this cognitive-linguistic favoritism with more workaday prejudice and bigotry facing ethnic minorities, and you may begin to imagine the challenges faced by non-native speakers.

It seems reasonable enough to believe that viewers calling out Alexander Payne, or Thai-Vietnamese actress Hong Chau herself, as troubling or in poor taste are in fact dealing with their own built-in cognitive mis-recognition, as they struggle with internalized accent discrimination. Instead of sufficiently grappling with that bias — as, I’m certain, “Downsizing” implores its audience to do —they’d rather bracket it as “problematic,” cut ties with the character and send it out to see on the proverbial ice floe (or in the likewise proverbial flatscreen TV box).

I would even go as a far to suggest that the bulk of people who work themselves into a lather about such things are the kind of thick-headed individuals concerned not so much with things like equality and charitable fellow-feeling as with the conspicuous broadcasting of their own hollow virtue.

After all, the recent research around accent discrimination suggests, it’s not those speaking in heavy accented English who are slow-witted. It’s the people who think there’s something wrong with those accents, who equate the inelegant handling of their native tongue with a defect in intelligence, or even basic humanity. Put even more simply: it’s not Hong Chau’s accent that’s racist. What’s racist is the anxious reaction to such an accent. It’s not just the mind, but the heart that suffers pains of recognition.

“Downsizing” isn’t just a late-capitalist satire about people shrinking in order to increase their personal wealth under the auspices of saving the planet. It’s a film about how the problems present in our present, full-size social sphere will continue to exist and reproduce themselves, no matter the scale. It’s a cliche to say that the scenarios of certain films or books represent a “microcosm” of the real world. But in the case of Payne’s film, it is quite literally true. Given this theme of miniaturization, it makes sense — thematically, and perhaps even physically — for so many modern issues of empathy and identification to be condensed into a single, five-inch-tall character.

Because it’s not that Chau’s character is a stereotype. It’s that she challenges what happens to even the woke, liberal consciousness when confronted by the reality of ethnic and linguistic difference. With “Downsizing,” Payne proposes a sense of solidarity between dopey, pudgy, party Midwestern schlubs like Damon’s Paul Safarnek and socially marginalized subjects like Chau’s Ngoc Lan Tran, whose social difference is marked not only linguistically, but ethnically, economically and physically.

That a certain strain of viewer would reject that call for mutual compassion and understanding in the name of what exactly? Good taste? Not being discomfited? The unease of having to hear someone speaking English in a heavy accent? Almost certainly says more about a certain bloc of hysterical viewers than it does about the film itself.