Doug Jones' Alabama miracle: It all came down to turnout

The lesson for Democrats from Alabama is simple: Stop trying to lure Republicans and focus on turning out the base 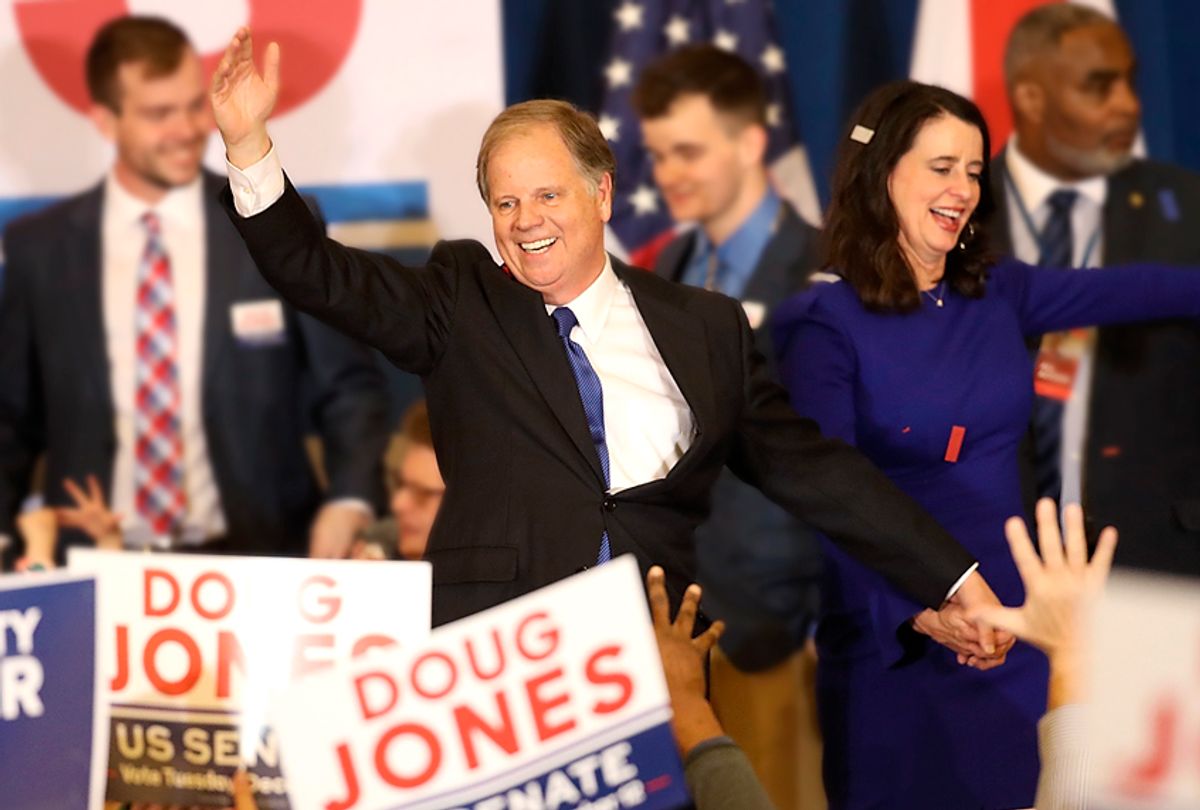 The question hovering over the Alabama U.S. Senate election, at least for the pundits, was simple: Would Alabama Republicans rather vote for a child molester or a Democrat? The answer was sadly predictable: Even though the allegations against Republican Roy Moore -- that he had pursued or molested teen girls when he was in his 30s -- were entirely credible, white conservative voters still picked Moore over the KKK-fighting Democrat Doug Jones.

In the end, however, in a true miracle that concludes a bizarre year in American politics, Jones won the Alabama race in a squeaker. (At this writing, his margin over Moore is barely over 10,000 votes.) In the end, Jones' unexpected victory came because Democrats -- depressed after many years of never winning statewide elections in Alabama -- were fired up to vote, and turned out in big numbers sufficient to drown out the hard right.

As Nate Cohn of the New York Times tweeted, the Alabama result was the direct result of the turnout gap closing:

The lesson here for Democrats is simple: Stop trying to win over Republican voters. Instead, turn out the Democratic base. Indeed, the lesson of Alabama, which Democrats should carry with them into the 2018 elections, is to focus on motivating the base. This was true in 2016, when Hillary Clinton lost largely because black turnout was down in several key states. It proved true in Alabama, where Jones was able to win the reddest of red states because black voter turnout was incredibly high, despite extensive Republican attempts at voter suppression in the state. Some of this was due to the high profile of the race, but a lot of it was due to aggressive efforts to get out the black vote in the state.

Clinton's biggest mistake in 2016 was believing she could use Donald Trump's obvious piggishness to chip off white female voters who usually vote Republican. It didn't work. The white conservative woman who has had enough of men's nonsense is a nice fantasy, but the reality is that such women are both too motivated by racial politics and too loyal to the men in their lives to break free. Jones' victory shows a different path forward. The focus on turning out the liberal base, and black voters in particular, paid off with a Democratic victory almost no one believed would happen.

Despite all the hope from pundits that all that talk about sexual morality would translate into white evangelicals voting against Moore, CNN exit polls show that 81 percent of such voters stuck with the tainted Republican nominee. None of this should be surprising. Posturing about sexual morality and the protection of children has always been a fig leaf for the true Christian-right goal, which is mandatory male-dominated heterosexuality for all. That's why so many Christian conservatives moved seamlessly from claiming that LGBT people were a threat to children to defending Moore for allegedly preying on children. It's also why the people who wax poetic about fetal life repeatedly vote against food, shelter and health care for actual children. They have never cared about children. It's always been a feint, a way to justify ugly attitudes about women's equality and LGBT rights.

As I argued last month, after the initial shock of the allegations wore off, conservatives were always going to rally around Moore: "Republicans in that state are likely familiar with the fetish that far-right evangelicals have for young teenagers. They aren't going to be all that surprised by any of this, let alone interested in holding Moore accountable."

That largely turned out to be true. A focus group organized by Frank Luntz for Vice showed that while some Moore voters tried to write off the accusations as lies, others simply made excuses for him, arguing that chasing young girls wasn't as big a deal — at least back in the glorious 1970s — as the supposedly "liberal" media was making it out to be.

And of course this election was about race. CNN's exit polling shows 70 percent of white voters going for Moore and 95 percent of black voters backing Jones. While the allegations of sexual abuse and general creepiness dominated national headlines, the election was as much about racial politics as anything else. On one hand, Moore was an obvious racist, who invoked nostalgia for slavery and has championed the "birther" conspiracy theory about Barack Obama. Jones, on the other hand, famously put away the Klansmen responsible for the Birmingham church bombing. These differences matter to black voters, of course, but they also matter to white voters. The politics of white supremacy still matter, which is why candidates like Moore or Donald Trump can be overt racists and not only retain the white vote, but sometimes run up higher margins.

The lesson here is simple: Democrats should stop chasing those elusive Republicans who have had enough. Generally speaking, they will vote for a child molester over a Democrat. There is no "too far" for Republicans, at least when it comes to beating Democrats. Instead, stop treating constituencies that loyally vote for Democrats as an afterthought, and put them first, both in policy and in organizing. In June, a letter from black female leaders to the Democratic Party made exactly this point, calling on the party to spend more time valuing its core voters instead of chasing the white whale of the "moderate" Republican. Alabama's results prove that.

It's not just because Moore was repeatedly and credibly accused of being a child molester. The liberal base is angry, organized and ready to go. A Democrat won Alabama -- in an off-year special election. In less than a year, the question will be whether the Democrats can replicate that victory on a large scale across the country. Odds are looking good, if the party pays attention to the real lessons of this miraculous victory.

After Alabama votes, what's next? Tune in to "Salon Talks" Wednesday at 12 p.m. ET and 9 a.m. PT to watch Salon's Amanda Marcotte, Alyona Minkovski and Jeremy Binckes break down what the results of Tuesday's Senate election mean now and looking ahead to 2018. Watch "Salon Talks" on Facebook, Periscope  and Salon.