Roy Moore vs. the Constitution: What are the roots of his radical views? 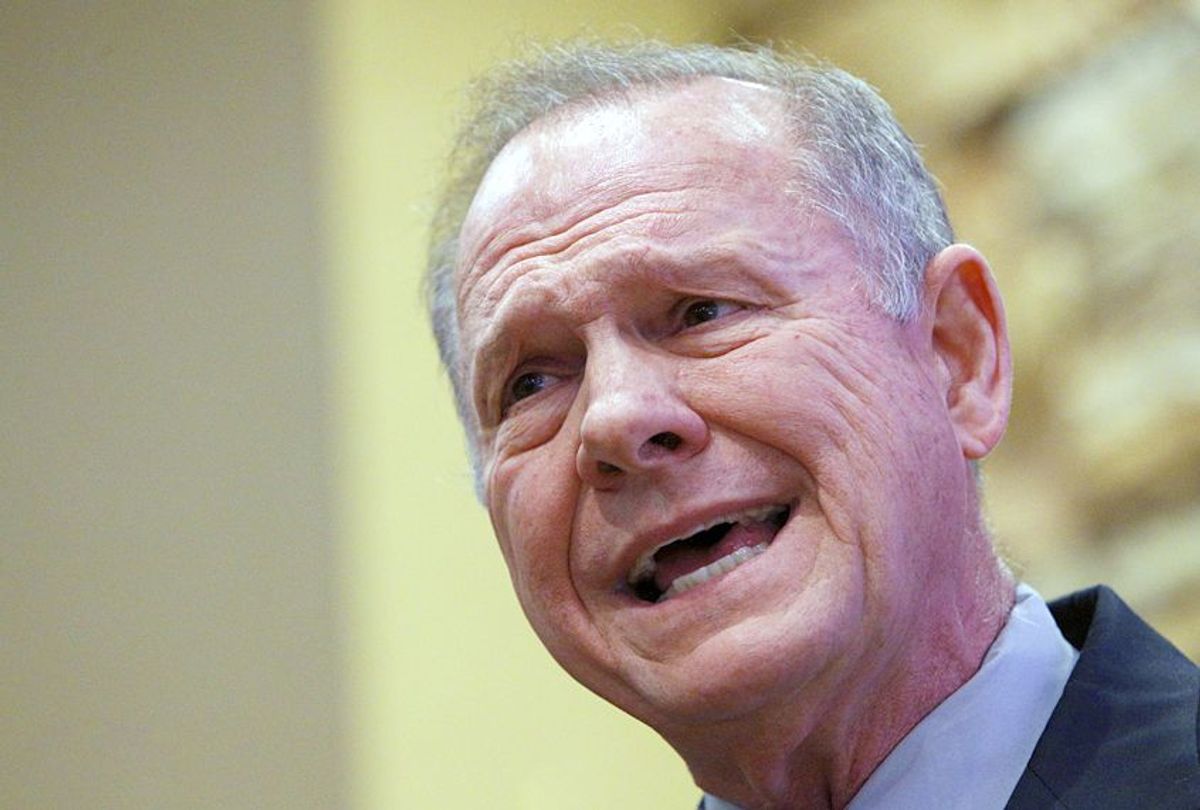 On Tuesday, Alabama voters go to the polls to determine whether they'd rather have an accused child molester or a Democrat as their junior United States senator. As the hour draws near in the contest between Republican Roy Moore and Democrat Doug Jones, Moore isn't getting negative coverage just because of the multiple women who have accused him of sexually pursuing them as high school girls, and in a couple of cases actually molesting them. Moore's stranger views of history are also starting to grab public attention.

Last week, there was a flurry of coverage regarding remarks Moore made about slavery in September, which resurfaced on social media. An audience member at a primary campaign event asked Moore about the last time he thought America was "great," and Moore seemed to suggest that it was prior to the Civil War. "I think it was great at the time when families were united — even though we had slavery," he said, because "families were strong, our country had a direction."

After that came out, CNN found a 2011 clip of Moore's appearance on a far-right, conspiracy theory-laden radio show. During the interview, Moore agreed that it would "eliminate many problems" to get rid of all amendments to the U.S. Constitution, at least after the first 10 included in the Bill of Rights.

Moore also said that the 14th Amendment, which addresses universal citizenship rights and equal protection under the law, had "serious problems with its approval by the states." Perhaps not coincidentally, the 14th Amendment has has been used by courts in recent years to strike down school segregation and to legalize same-sex marriage. Moore rolled out a convoluted argument that basically portrayed the amendment as an example of illegitimate federal overreach.

These arguments may sound strange to most, but Julie Ingersoll, a religious studies professor at the University of North Florida, has heard variations on these claims during her many years of studying the religious right, particularly the fringe figures associated with the movement called Christian Reconstruction. As she documents in her book "Building God's Kingdom: Inside the World of Christian Reconstruction," it's a movement of religious conservatives who believe the United States was meant to function as a Christian theocracy, in practice if not in name, and who routinely make apologies for both slavery and the Confederacy.

Moore has never publicly identified as a Christian Reconstructionist, but as Ingersoll told Salon, “These are folks that he pals around with, he’s published with, he’s spoken at their conferences, he’s identified with them in lots of ways. When he does say explicit things, like this about the 14th Amendment, it’s completely compatible with what they argue.”

Earlier this month, Salon published an article about Moore's ties to Christian Reconstruction, including his history of working with Vision Forum, a now-defunct far-right organization run by Reconstructionist Doug Phillips. Ingersoll told Salon that Phillips drew heavily on the work of 19th-century theologian Robert Lewis Dabney, a slavery apologist who served in the Confederate army and worked directly with Stonewall Jackson.

"Phillips is very enamored with Dabney and very much in agreement with a bunch of the stuff Dabney wrote about," Ingersoll explained, noting that Vision Forum -- before its collapse due to Phillips' very public sex scandal -- published a book about Dabney's ideas regarding feminism and social equality.

As the Southern Poverty Law Center has detailed, Dabney's writings were revived in the 1960s by white pastors who were impressed by "Dabney's virulent racism — he saw blacks as a 'morally inferior race,' a 'sordid, alien taint' marked by 'lying, theft, drunkenness, laziness, waste'" -- and his belief that slavery was godly.

Dabney's writings have since become the backbone of both Christian Reconstruction and the neo-Confederate movement — between which there is a lot of overlap. For instance, neo-Confederate pastor Doug Wilson heavily relied on Dabney's writings for his book "Southern Slavery, As It Was," which argues that slavery was a good thing that offered slaves "a life of plenty, of simple pleasures, of food, clothes, and good medical care" and "that the black family has never been stronger than it was under slavery."

These names can be hard to keep track of, but that points to the larger issue here: There's a huge, if still largely underground, movement of far-right Christian pastors and activists who have radical views about government, race, gender and even slavery. Moore's public comments on these topics often have direct echoes of these views, although he craftily tends to hint at these radical notions rather than embracing them fully.

Ingersoll noted how Moore played at this game during the 2011 clip, from a show called "Aroostook Watchmen." The hosts go all-in with the the claim that "the 14th Amendment was only approved at the point of the gun," an allusion to the neo-Confederate notion that this amendment, which conferred full citizenship on black people, was illegitimate because the Southern states, under Reconstruction occupation, couldn't consent freely to it. Moore never outright says that, but as mentioned earlier, says the amendment "had very serious problems with its approval by the states."

Similarly, in Moore's comments about slavery, he never comes right out and says slavery was good. But he's still echoing claims, made by Wilson and others, that black people somehow benefited from slavery when he says "families were strong" in the era of legal human bondage.

This ambiguity, Ingersoll said, allows Moore to have it both ways. He can wink at the fringe right that embraces these radical views while maintaining enough wiggle room "to say later that he didn’t say that," as she puts it, if he gets called out.

This two-faced strategy is also on display with the 14th Amendment issue. When asked about it, Moore's campaign claimed that the media was "taking a discussion about the overall framework for the separation of powers as laid out in the constitution to twist Roy Moore's position on specific issues," while dodging the fact that the amendments he has suggested are illegitimate were necessary to ensure citizenship rights for all people who aren't white men.

The campaign also claimed that the media was being "recklessly malicious" regarding Moore's slavery comments, because he was supposedly just saying that "America is great when our families are united." The campaign did not explain why Moore linked slavery with American greatness if that was not his intention.

Moore's efforts at plausible deniability aside, the larger issue here is that his public comments suggest a lengthy history of engagement with and sympathy for some of the most fringe right-wing movements in American politics. Moore has openly worked with Christian Reconstructionists and continues to echo some of their views on issues that most Americans think are settled questions, such as women's suffrage or the ban on slavery. His likely election to the U.S. Senate will be another step in the mainstreaming of fringe anti-equality views into American conservatism.