Trump’s FCC wants to kill a free and open internet 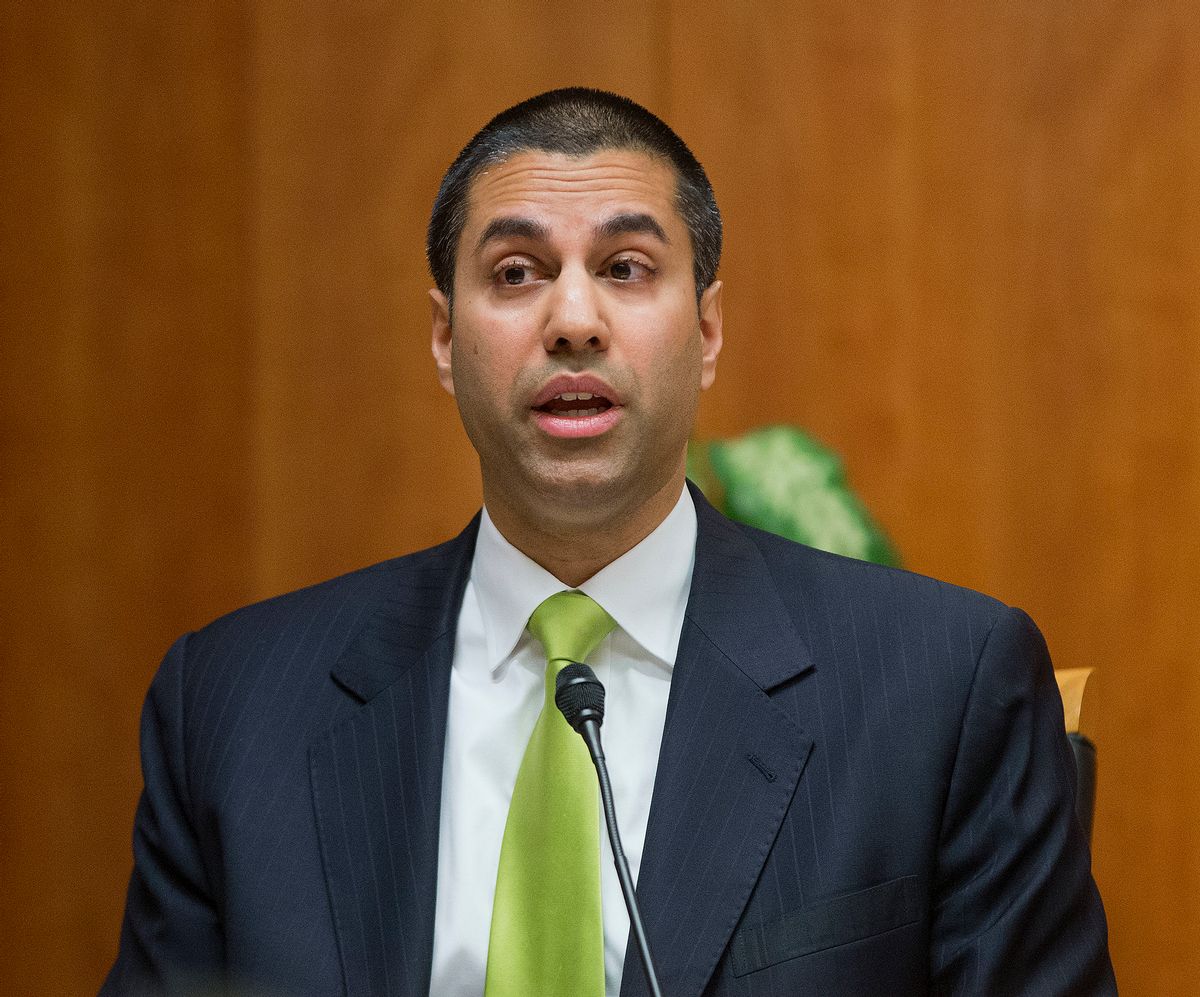 To understand why the internet’s in big trouble again, first know this about how Washington works these days:

Donald Trump seems to irradiate and poison everyone who is sucked into his gravitational pull. There’s a black hole in residence at 1600 Pennsylvania Ave.

Attorneys engaged in his defense twist themselves into questionable statements and behaviors as special counsel Robert Mueller’s probe draws nearer. Members of Congress surrender their self-esteem and whatever shred of decency they may have left to put forward the plutocrats’ agenda, while pandering to Trump’s hardcore followers for fear of losing campaign donations or being primaried. Administration officials who are established enough to know better bow in obeisance or vigorously nod their heads in agreement with any dingbat thing the president says.

Mysteriously, some actually appear to enjoy the Kool-Aid; for all the buffoonery, Trump’s cave-bear philosophy, such as it is, tends to favor the ideological and theocratic inclinations of people like Vice President Pence and EPA Administrator Scott Pruitt. Others are more manipulative and cynical, using this special moment in American history to hold their noses, take advantage and use the clown show as cover to advance the wish list that corporate America has been mailing to Santa for decades.

In that latter category, place the ambitious current chairman of the Federal Communications Commission, Ajit Pai. He was appointed a member of the FCC in 2011, and then named by Trump to take the chair earlier this year. Ever since, Pai has reshaped the commission as a pass-through for the telecommunications giants, giving them virtually everything they want. Acting more like the associate general counsel of Verizon that he once was and less like the government regulator he’s supposed to be, Pai quickly began doing his utmost to wipe out whatever rules remain that keep open to citizens the lines of communication essential to a democracy.

Right now, his sights are aimed at net neutrality, the set of protections approved by the FCC in 2015 that keep the big internet service providers (ISPs) like Verizon, Comcast, AT&T and Charter from completely taking over and deciding who can see what on the web, how fast and for how much.

Why is this important? In a recent interview, Annenberg School Professor Victor Pickard says that net neutrality “speaks to a core social contract between government, corporations and the public… how can members of the public obtain information and services, and express ourselves creatively and politically, without interference from massive corporations?”

That’s the nub of it. Ending net neutrality will squelch competition, innovation and small internet startups, and limit freedom of expression, independent voices and diverse viewpoints. More than ever, Big Business, like Big Brother, will control what you read, see and hear and limit your own ability to speak up and share your opinions, your creativity, your life.

A commission vote has been set for Thursday, Dec. 14, and despite vast and continuing public opposition, the three Republican commissioners, including Pai, seem determined to overrule the two Democrats and once again give the big guys what they want.

In his obdurate denial of the desires of the public (both on the right and left, by the way) Pai embraces certain of the more delightful aspects of Trumpism: doublespeak, belittling the other side, blaming everyone else for problems and claiming fake news when presented with the facts. In a recent speech defending his position, sponsored by the conservative, free-market think tank R Street Institute and the Lincoln Network, Pai described what he called “wild accusations, fear-mongering and hysteria” and made fun of such celebrities as Cher, Mark Ruffalo and George Takei who have spoken out in support of net neutrality.

What’s more, he claimed it wasn’t the ISPs that were trying to take over the web, but that content providers Google, Facebook and Twitter were the real culprits: “They might cloak their advocacy in the public interest, but the real interest of these internet giants is in using the regulatory process to cement their dominance in the internet economy.”

Chairman Pai, this is called projection. You claim to be preserving internet freedom but in truth your attempt to destroy net neutrality does just the opposite. In pushing your case you’re ignoring the people, the facts and the law.

Millions of comments in support of net neutrality have been left on the FCC website, and in the first 24 hours after Pai released his draft of the net neutrality proposal (just before Thanksgiving), more than 200,000 phone calls were made to Congress. As of a week ago Sunday that number had reached 750,000. On Thursday, Dec. 7, 700 protests across all 50 states were held outside Verizon stores and other locations.

What’s more, Chairman Pai, contrary to your claims that net neutrality has squelched the growth of investment in the internet, there has been a 5-percent increase since the rules were put into effect.

In fact, Tom Rutledge, CEO of Charter Communications, the second-largest cable company in the United States, told investors in 2016 that net neutrality “didn’t really hurt us; it hasn’t hurt us.”

Finally, Chairman Pai, you and the telecommunications monoliths claim that Title II of the Communications Act of 1934, the law cited to classify ISPs as utilities (like telephones and electricity) and allow net neutrality rules, is out-of-date and irrelevant.

On the contrary, says Danny Kimball, who teaches communications and media studies at Goucher College. In The Washington Post, he wrote that Title II makes it possible “for the public to access information and communication on an equal basis… it’s about basic principles of openness and nondiscrimination, no matter the technology used to communicate.”

Title II is precisely the law under which the courts have ruled that the net neutrality rules are valid. And as Tim Wu, originator of the phrase “net neutrality” says, “A mere change in FCC ideology isn’t enough” to change that.

So on Thursday the FCC may vote to overturn net neutrality, but that decision will go straight to the courts. Boing Boing’s Cory Doctorow points out that “it stands a good chance of being struck down — and in any event, the court battle may last until 2020 and serve as a good argument to spur voters to vote against Trump and thus change the FCC leadership, mooting the whole point.”

Meanwhile, Chairman Pai makes jokes at a Washington dinner about Verizon having groomed him as a Manchurian Candidate to take over the FCC. He keeps promising a “light-touch regulatory framework,” and the ISPs pinky swear that if net neutrality is revoked they won’t ever, ever do anything bad: no blocking, no throttling, no fast and slow lanes, no preferential treatment, no overcharging. Any potential danger, they claim is merely theoretical, not real.

Trust us, they say.