Susan Collins is a yes vote; so is John McCain. With Doug Jones waiting, GOP might send bill to Trump next week 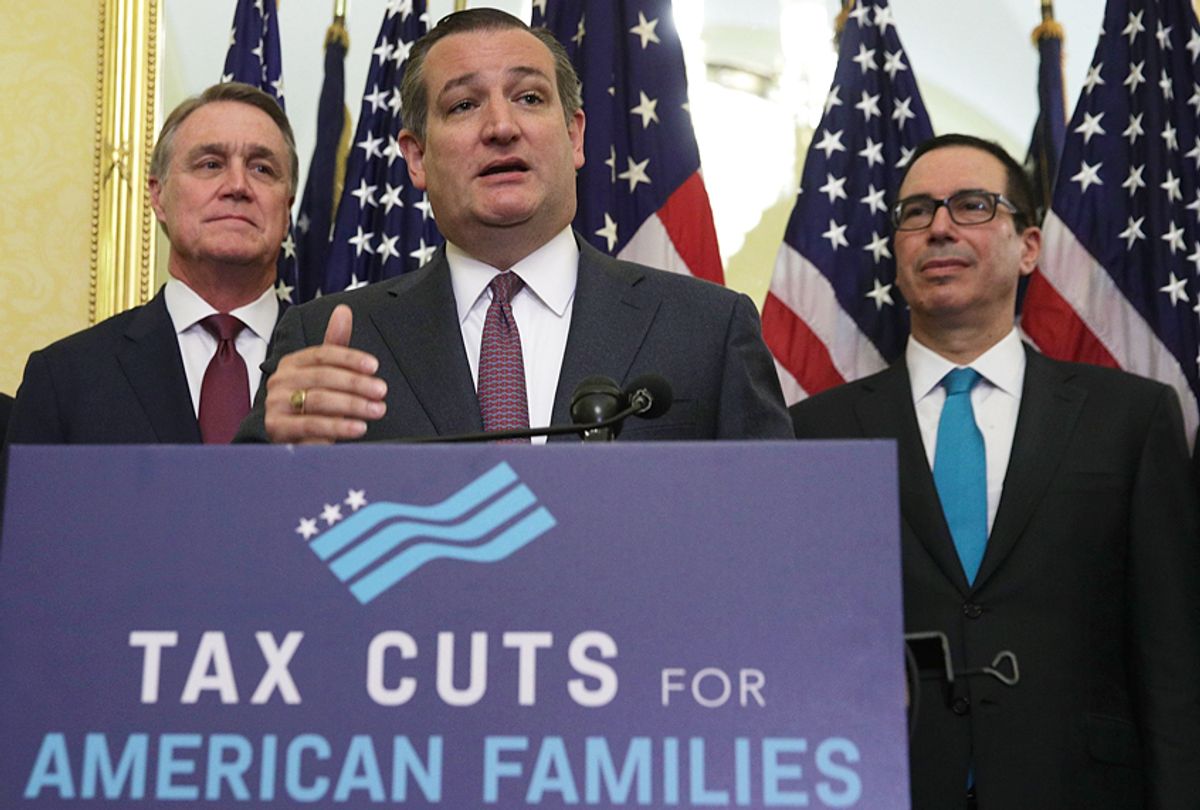 The moderates will not save us; a tax deal is all but done.

Even before Republicans began Wednesday's first and only public meeting of the conference committee working to blend two different tax plans passed by the House and the Senate, GOP leaders had already announced that they had struck a deal on the tax bill, keeping them on pace for a final vote before the end of next week. A Christmas miracle!

Sen. Susan Collins, the “moderate” Republican senator from Maine who had been targeted by liberal activists for her reluctance towards the bill, now sounds like she is in full support of her party’s plan to rush a final bill out of committee by Friday. Seen by some as a potential swing vote on the tax bill, Collins reached an agreement with Senate GOP leaders that she would vote for the tax cut package, as long as two bills that shore up Obamacare’s insurance markets were passed before the end of the year. Republicans’ tax plan, it should be noted, eliminates Obamacare’s mandate that all Americans have health insurance, thereby leaving 13 million Americans vulnerable.

“I had a very good discussion with the vice president yesterday about that issue and I feel certain the agreement that I negotiated will be kept — this year,” Collins said on Wednesday, seemingly satisfied with the promise she received from Vice President Mike Pence.

Sen. John McCain, R-Ariz., who famously voted against Republicans’ plans to repeal the Affordable Care Act earlier this year, citing an abandonment of “regular order,” has thus far given his blessing to the rushed process. (He was admitted Wednesday to Walter Reed National Military Medical Center for "normal side effects" of his cancer treatments.)

GOP leaders plan to hold an initial procedural vote next Monday, a final Senate vote Tuesday and then send the measure to the House for final passage — likely without the vote of a single Democrat.

“I was told before the conferees met, they already had a deal,” Sen. Joe Manchin of West Virginia, likely the most moderate Democrat in the chamber, complained to The Hill.

One major deal that fell into place would allow taxpayers to claim either their local property tax deduction or a deduction for state and local income taxes, up to $10,000 in either case, on federal filings. That issue had threatened to jeopardize the entire deal for Republicans.

The final version of the tax plan that blends individual bills from the House and Senate also lowers the corporate tax rate to 21 percent, a major reduction from the 35 percent rate set in law now, and does away with the the alternative minimum tax for corporations, according to Senate Majority Whip John Cornyn, R-Texas. There was also a deal to allow homeowners to deduct the interest on up to $750,000 in mortgage debt, down from $1 million now.

Despite Rubio's continued pouting, however, he will likely follow his party's leaders like a lemming off the tax cut cliff.

Still unclear is what the overall cost of the revised legislation will be — and that may ultimately prove costliest.

The Senate version of the bill narrowly passed 51 to 49, with Republican Sen. Bob Corker of Tennessee, a fiscal conservative, voting against it because of the hole it blows in the deficit.

Nothing in the conference bill has alleviated his concerns, Corker told reporters on Wednesday.

Republican leaders are obviously eager to push through their tax plan before Sen.-elect Doug Jones of Alabama, a Democrat who won Tuesday's special election to fill Jeff Sessions' old seat, is seated early next year. “We’re very close to getting it done; we’re very close to voting,” President Trump said of the tax bill in his last-minute sales push Wednesday. If anything is going to stop this train, it certainly won’t be the so-called moderates.