Trump has been ignoring Russia threats and cozying up to authoritarians: report

Trump replied "So what?" when informed that members of his incoming Cabinet supported the intelligence on Russia 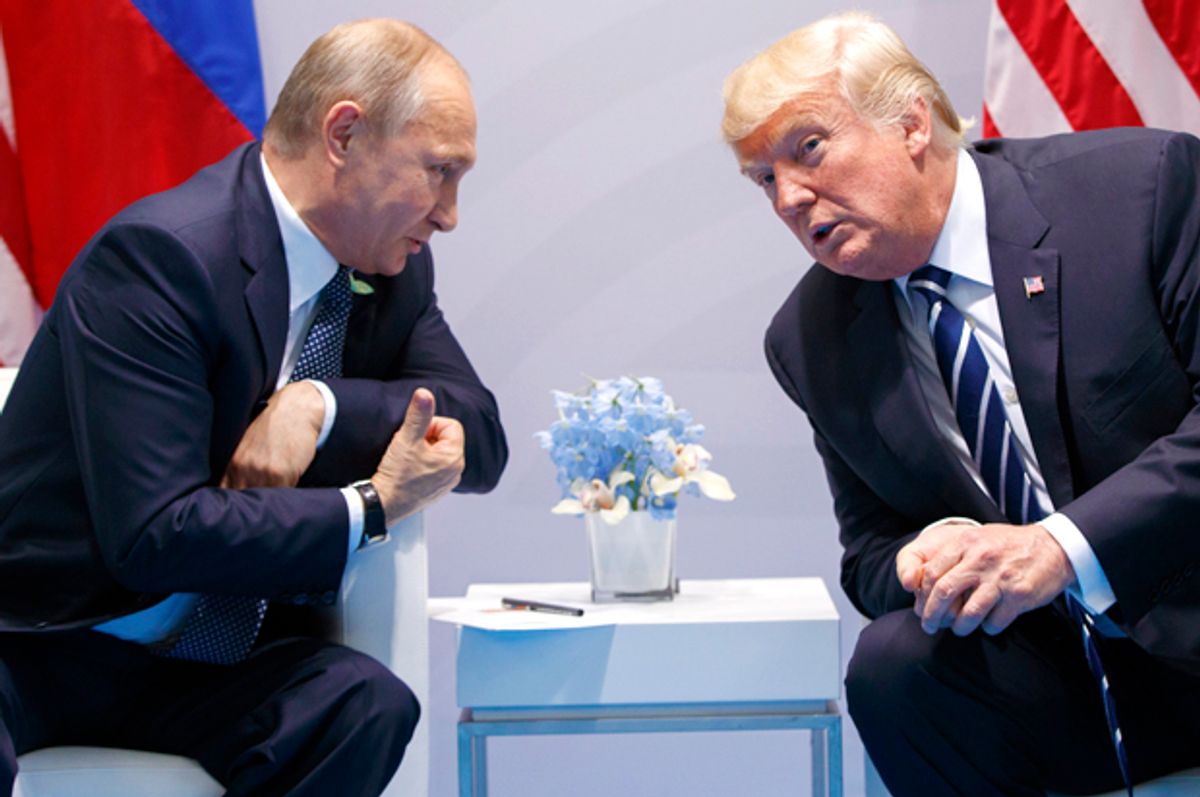 It's no secret that President Donald Trump refuses to admit that Russian meddling in the 2016 presidential election helped him get elected. But a new report from The Washington Report reveals the extent of his denialism on this critical issue.

1. Trump vehemently resisted efforts by his most trusted advisers to get him to publicly accept the intelligence community's conclusions about Russia.

Holding impromptu interventions in Trump’s 26th-floor corner office at Trump Tower, advisers — including Trump’s son-in-law, Jared Kushner, and designated chief of staff, Reince Priebus — prodded the president-elect to accept the findings that the nation’s spy chiefs had personally presented to him on Jan. 6.

They sought to convince Trump that he could affirm the validity of the intelligence without diminishing his electoral win, according to three officials involved in the sessions. More important, they said that doing so was the only way to put the matter behind him politically and free him to pursue his goal of closer ties with Russian President Vladi­mir Putin.

“This was part of the normalization process,” one participant said. “There was a big effort to get him to be a standard president.”

But as aides persisted, Trump became agitated. He railed that the intelligence couldn’t be trusted and scoffed at the suggestion that his candidacy had been propelled by forces other than his own strategy, message and charisma.

Told that members of his incoming Cabinet had already publicly backed the intelligence report on Russia, Trump shot back, “So what?” Admitting that the Kremlin had hacked Democratic Party emails, he said, was a “trap.”

2. Trump has worked to pursue pro-Russia policies despite the intelligence community's warnings about that country's hostility toward the United States.

There are real-world ramifications to Trump's unwillingness to accept that Russia meddles in the 2016 presidential election.

Rather than search for ways to deter Kremlin attacks or safeguard U.S. elections, Trump has waged his own campaign to discredit the case that Russia poses any threat and he has resisted or attempted to roll back efforts to hold Moscow to account.

His administration has moved to undo at least some of the sanctions the previous administration imposed on Russia for its election interference, exploring the return of two Russian compounds in the United States that President Barack Obama had seized — the measure that had most galled Moscow. Months later, when Congress moved to impose additional penalties on Moscow, Trump opposed the measures fiercely.

The Post also noted that Trump's position on Russia has undermined some of America's most important alliances:

Trump’s stance on the election is part of a broader entanglement with Moscow that has defined the first year of his presidency. He continues to pursue an elusive bond with Putin, which he sees as critical to dealing with North Korea, Iran and other issues. “Having Russia in a friendly posture,” he said last month, “is an asset to the world and an asset to our country.”

His position has alienated close American allies and often undercut members of his Cabinet — all against the backdrop of a criminal probe into possible ties between the Trump campaign and the Kremlin.

3. Trump's advisers deliberately avoid including information about Russia in policy briefings that they know will upset him.

Trump's attitude toward Russia is so volatile that it impairs his administration's ability to be forthright with him.

Intelligence officials who brief the president play down information about Russia they fear might displease him, current and former officials said. Plans for the State Department to counter Russian propaganda remain stalled. And while Trump has formed a commission to investigate widely discredited claims of U.S. voter fraud, there is no task force focused on the election peril that security officials regard as a certainty — future Russian attacks.

Trump has never convened a Cabinet-level meeting on Russian interference or what to do about it, administration officials said. Although the issue has been discussed at lower levels at the National Security Council, one former high-ranking Trump administration official said there is an unspoken understanding within the NSC that to raise the matter is to acknowledge its validity, which the president would see as an affront.

Russia-related intelligence that might draw Trump’s ire is in some cases included only in the written assessment and not raised orally, said a former senior intelligence official familiar with the matter. In other cases, Trump’s main briefer — a veteran CIA analyst — adjusts the order of his presentation and text, aiming to soften the impact.

“If you talk about Russia, meddling, interference — that takes the PDB off the rails,” said a second former senior U.S. intelligence official.

Brian Hale, a spokesman for the Office of the Director of National Intelligence, said the briefing is “written by senior-level, career intelligence officers,” and that the intelligence community “always provides objective intelligence — including on Russia — to the president and his staff.”

Trump’s aversion to the intelligence, and the dilemma that poses for top spies, has created a confusing dissonance on issues related to Russia. The CIA continues to stand by its conclusions about the election, for example, even as the agency’s director, Mike Pompeo, frequently makes comments that seem to diminish or distort those findings.

In October, Pompeo declared the intelligence community had concluded that Russia’s meddling “did not affect the outcome of the election.” In fact, spy agencies intentionally steered clear of addressing that question.

4. Russia considers its meddling in the 2016 presidential election to have been a success.

The feeble American response has registered with the Kremlin.

U.S. officials said that a stream of intelligence from sources inside the Russian government indicates that Putin and his lieutenants regard the 2016 “active measures” campaign — as the Russians describe such covert propaganda operations — as a resounding, if incomplete, success.

Moscow has not achieved some its most narrow and immediate goals. The annexation of Crimea from Ukraine has not been recognized. Sanctions imposed for Russian intervention in Ukraine remain in place. Additional penalties have been mandated by Congress. And a wave of diplomatic retaliation has cost Russia access to additional diplomatic facilities, including its San Francisco consulate.

But overall, U.S. officials said, the Kremlin believes it got a staggering return on an operation that by some estimates cost less than $500,000 to execute and was organized around two main objectives — destabilizing U.S. democracy and preventing Hillary Clinton, who is despised by Putin, from reaching the White House.

The bottom line for Putin, said one U.S. official briefed on the stream of post-election intelligence, is that the operation was “more than worth the effort.”

5. Trump seems to most admire strongmen and holds German Chancellor Angela Merkel in low regard because she isn't dictatorial.

You would think that, as the leader of one of America's strongest allies and one of the world's most powerful democracies (besides the United States itself), Trump would want to cultivate a positive relationship with German Chancellor Angela Merkel.

Apparently she isn't dictatorial enough to meet with Trump's approval.

Another former U.S. official described being enlisted to contact the German government before Chancellor Angela Merkel’s visit at the White House in March. The outreach had two aims, the official said — to warn Merkel that her encounter with Trump would probably be acrimonious because of their diverging views on refugees, trade and other issues, but also to urge her to press Trump on U.S. support for NATO.

The signature moment of the trip came during a brief photo appearance in which Trump wore a dour expression and appeared to spurn Merkel’s effort to shake his hand, though Trump later said he had not noticed the gesture.

His demeanor with the German leader was in striking contrast with his encounters with Putin and other authoritarian figures. “Who are the three guys in the world he most admires? President Xi [Jinping] of China, [Turkish President Recep Tayyip] Erdogan and Putin,” one Trump adviser said. “They’re all the same guy.”

Merkel has never fit into that Trump pantheon. Before her arrival, senior White House aides witnessed an odd scene that some saw as an omen for the visit. As McMaster and a dozen other top aides met with Trump in the Oval Office to outline issues Merkel was likely to raise, the president grew impatient, stood up and walked into an adjoining bathroom.

Trump left the bathroom door open, according to officials familiar with the incident, instructing McMaster to raise his voice and keep talking. A senior White House official said the president entered the restroom and merely “took a glance in the mirror, as this was before a public event.”