Trump's regulators: Eager servants of oil and gas, at our expense 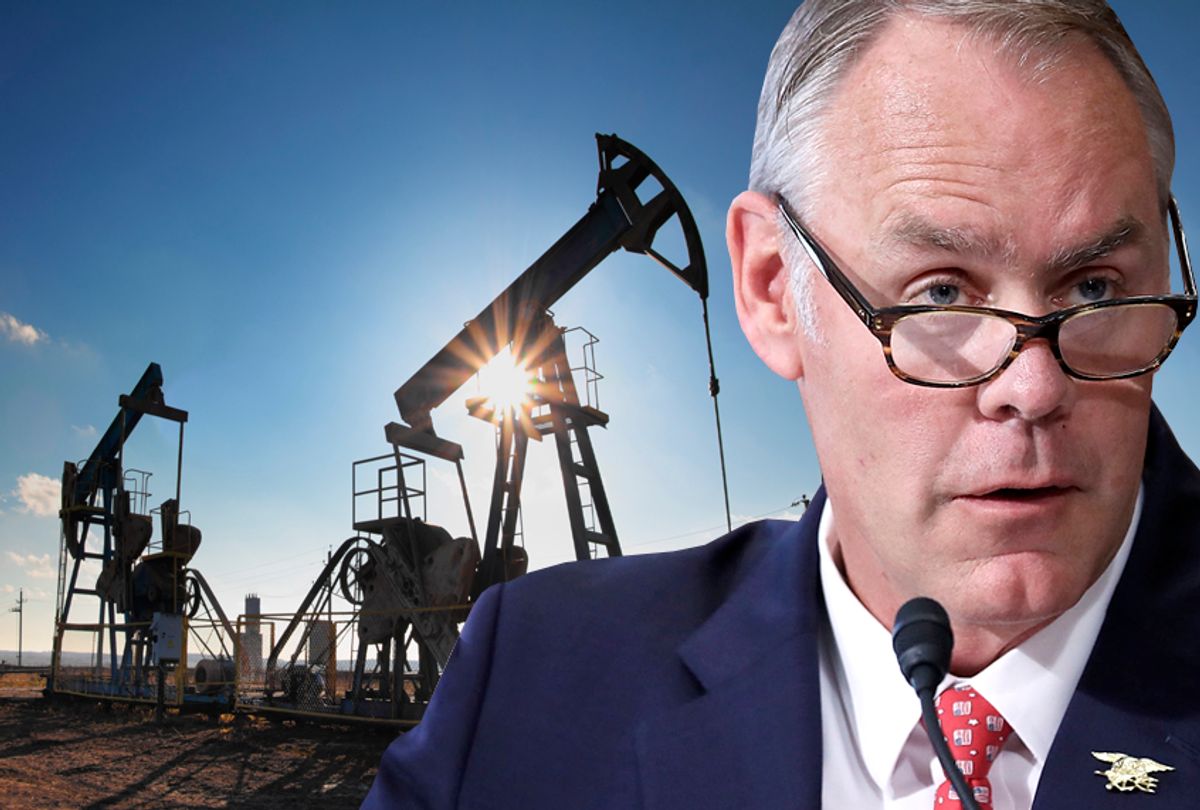 Eleven months into the Trump administration, it's worth seriously pondering the question: Does Donald Trump have something against clean air? Did a smogless day insult his mother, and now he's out for revenge? It seems silly, but it's hard not to wonder when the Trump administration seems so determined to roll back every bit of progress the Obama administration made when it comes to reducing air pollution and hopefully slowing down the rate of global warming.

(OK, it's probably that Trump just hates Obama that much.)

The obsessiveness of the Trumpian assault on clean air was illustrated again last week, when the Bureau of Land Management (BLM), which works under Secretary Ryan Zinke at the Interior Department, delayed the implementation of a rule requiring oil and gas companies drilling on federally owned lands to curtail the waste of methane by releasing it in the air. The rationale for delaying the implementation of the rule until January 2019 was that the regulation "may be rescinded or significantly revised in the near future," a hint that Zinke would like to dump it entirely.

The way that the Interior Department regulates methane emissions may seem like a dry topic, but it actually provides a disturbing glimpse into the Trump administration's utter disdain for taxpayers, the planet and the rule of law.

“This is one more way President Trump and Interior Secretary Ryan Zinke are handing management of our public lands over to the special interests they consider their primary constituents," Chase Huntley, the energy and climate program director for The Wilderness Society, said in an emailed statement. "It’s a horrible deal for American taxpayers.”

Methane, while far less common than carbon in the atmosphere, is far more potent as a greenhouse gas. Estimates of how much methane contributes to climate change range from 10 percent to 25 percent of the problem, meaning that cutting back on methane emissions could significantly reduce the global warming impact. But fighting climate change, although it's important, was not the reason that the BLM passed this rule during the Obama administration. The official reason was that letting oil and gas companies simply leak methane into the air amounts to stealing money from the taxpayers.

"BLM has an obligation to address waste of natural resources," Meleah Geertsma, a senior attorney for the Natural Resources Defense Council, told Salon. Because the public owns these lands, taxpayers "are owed royalties on the amounts of oil and gas that are collected." Methane that is being leaked into the air is public property being wasted by private operators, and if it's not captured and sold, you and I are being cheated.

The Environmental Defense Fund estimates that taxpayers have lost nearly $2 billion worth of natural gas since 2013, simply because drilling companies vent it rather than spending the money on equipment and strategies needed to capture it and sell it as an energy source. The new rule, which was finalized towards the end of 2016, will, according to Interior Department estimates, reduce profits for small business operators by less than 0.02 percent, due to the cost of upgrading equipment. The captured methane, on the other hand, could provide enough energy to fuel 740,000 households a year.

“This was seen as a win-win-win," Kate Kelly, the director of public lands at the Center for American Progress, told Salon. Taxpayers got their royalties, human beings in general got cleaner air and industry -- OK, industry didn't like it, but at least standardized regulations give them a clearer path forward.

Still, many in the oil and gas industry loathe all forms of government regulation and have been fighting this methane rule for more than a year. As this timeline compiled by the Environmental Law Program at Harvard University details, there have been a dizzying number of attempts to destroy the rule, including lawsuits, an attempt to get Congress to overturn the rule and a previous effort by Zinke to delay its implementation indefinitely. All have failed so far — and environmental groups who have sued to keep the rule in place have been winning in court.

“Zinke is kind of the last venue for industry to try to put this thing on ice," said Geertsma of NRDC, "rather than actually doing what an agency is supposed to do, which is look at the evidence and provide a legal justification."

“There’s certainly a 'Where’s the cause?’ question and a sense that the administration is operating in a way where they feel rules don’t apply to them or they’re somehow above the law," Kelly said.

“This is very consistent with the pattern we’ve seen with this administration so far, in environmental regulations in particular," Geertsma said "Which is just to halt everything, don’t provide a factual record and claim you’re doing the work, when really your intention is to repeal the regulation later down the road.”

For instance, Zinke stayed another rule requiring drilling companies to pay full royalties to the public. While a judge overturned his stay, the delay tactic worked long enough for Zinke to kill the rule completely. He also hastened efforts to overturn a regulation on fracking before a federal judge listed a stay on the rule. Scott Pruitt, Trump's EPA head, has used much the same delaying tactic in trying to get rid of another methane regulation, which has also been halted by the courts.

There's a good chance that the courts will shut down Zinke's latest effort to delay implementation of this methane rule until he can find some half-baked justification to overturn it. That doesn't mean this tactic is not dangerous. Zinke's scattershot strategy is to throw up a bunch of delays and objections, and hope that some judge somewhere is corrupt enough or deluded enough to sign off on one of them. More important still, the whole process makes it clear how little the Trump administration cares about the public or the planet, and how willing it is to do substantial harm to both to serve the whims of the oil and gas industries.