I talked to people signing up for Obamacare. Here's what I learned 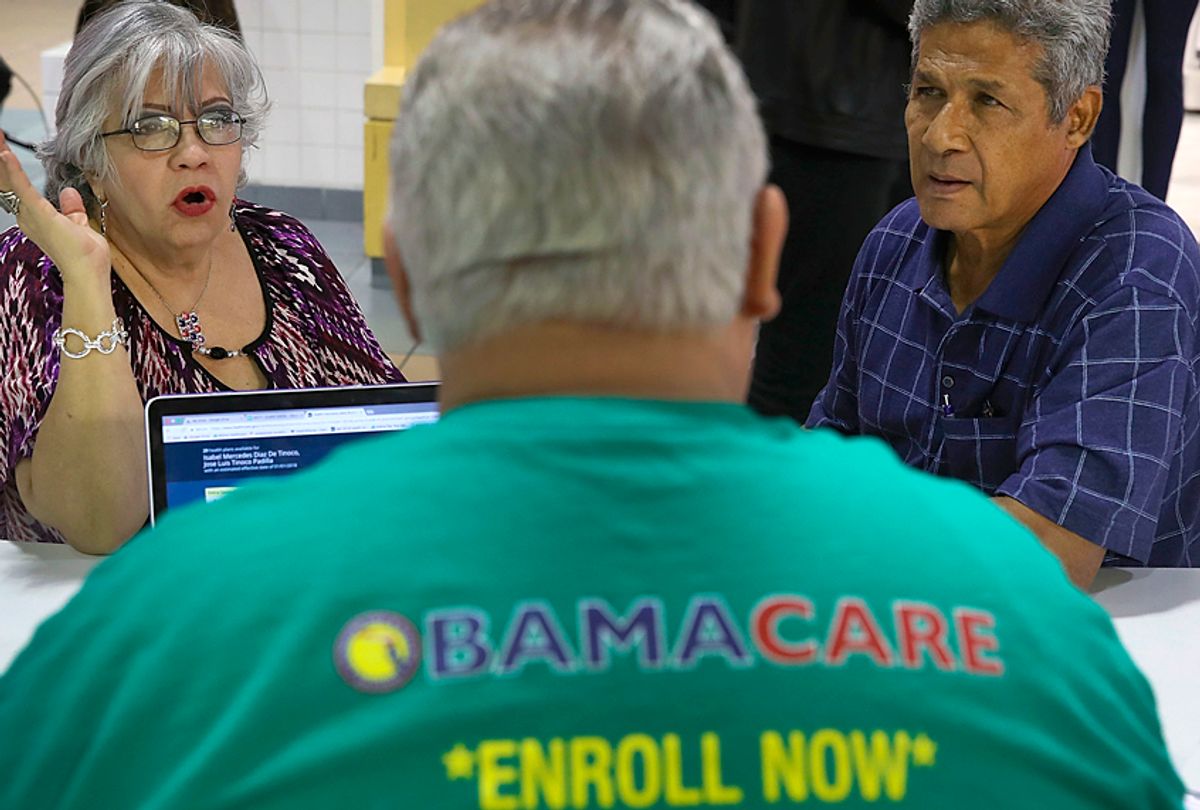 People sign up for insurance under the Affordable Care Act. (Getty/Joe Raedle)
--

I was supposed to be watching TV with my friends. Instead I was on my phone. I wasn't on Instagram or Snapchat. I was texting a woman who lives across the country. She was explaining the details of her health insurance.

For the past few weeks, health care has been a regular interruption in my life as I’ve interviewed strangers about their health insurance for a series focused on people shopping the state and federal exchanges. I wanted to know how former President Barack Obama's polarizing health care law affects the people it’s meant to insure in a year when the law’s existence is more precarious than ever.

I looked online and in person for people to profile. Most exchange shoppers who were willing to go on the record were in favor of “Obamacare,” though some ultimately couldn’t find affordable coverage on its exchanges this year. Only one person is totally against the law. These profiles aren't a scientific cross-section of America. They're meant to be an up-close look. But some clear patterns emerge when you look at the law in action.

I was mostly struck by how critical the law is for the people using the marketplace. Most Americans don't think health care is a right, according to recent Policygenius survey. Maybe it isn’t, but for everyone I talked to, it is certainly a need. People rely on their coverage to keep from losing work, to keep from going broke and to stay alive.

The law has its flaws

Obamacare isn’t perfect. For people who don't qualify for subsidies, marketplace prices can be far too expensive and unpredictable. And there are gaps. In states that chose not to expand Medicaid (as the law allows), some of the neediest people don't qualify for government health care or marketplace subsidies.

As someone who writes about health and follows the news, I knew these flaws existed. But talking to Elaine Upshaw, who was homeless earlier this year and nonetheless is getting $0 to help pay for a $15,000 health care plan in 2018, and Kim Rodgers-Weeks, an ACA supporter who found all the plans in her marketplace too expensive, drove home the law's shortcomings.

Those shortcomings, however, aren’t prevalent across exchanges — and, when you stop to examine the differences across states, it’s clear they’re not necessarily innate.

Obamacare was written with the expectation that every state would expand Medicaid to cover everyone with an income below 133 percent of the federal poverty level, while subsidies would help anyone making more afford a private plan. However, a 2012 Supreme Court ruling made expansion optional.

Thirty-two states, plus the District of Columbia, have expanded Medicaid since then. Georgia, where Upshaw lives, isn't one of them. To get Medicaid there, you can't just be poor — you have to meet other criteria, like being pregnant or disabled. Upshaw is too poor to get a subsidy, as her income is less than 133 percent of the federal poverty level, but she also doesn't qualify for Medicaid because she doesn't meet the additional criteria set by her state — and there's no fallback in the ACA for people in her situation. If she moved to a state that had expanded Medicaid, like say, Kentucky, she'd be covered.

The differences across states go beyond Medicaid. When I tried to attend open enrollment events (in an unsuccessful bid to find Obamacare shoppers), there weren’t any scheduled in New Jersey. There were plenty in New York, though. In fact, the state exchange and nonprofit groups were sending representatives to community events and businesses across New York almost daily to help people get health coverage.

New York could host these events, because, as a state-run exchange, it elected to maintain its $14 million advertising spend. New Jersey, conversely, uses the federal exchange to sign up residents, so its outreach efforts became limited once the Trump administration cut $90 million of Obamacare’s federal advertising budget and $23 million from “navigator” programs that help people enroll in plans.

The cut to federal funding widened an already present divide. When I interviewed state insurance officials for a different story, I found the ones that were proactive in implementing Obamacare, like New York and Washington, had an easier time retaining insurers and holding premiums steady. States where lawmakers were passive about — or openly hostile to — implementing key provisions were in crisis.

For instance, the states with the most sparse 2018 marketplaces (Alaska, Iowa, South Carolina and Wyoming) allowed residents to keep plans that weren’t Obamacare-compliant. People with these plans were largely healthy, given, at the time they signed up, insurers could deny people with pre-existing conditions. So rural areas particularly had “sicker” insurance pools. The higher cost of covering this group drove more insurers from the exchanges.

In other words, many of the law's problems aren’t the product of bad design; they’re the result of (often purposely) poor execution. Obamacare is going into its fifth year since many of its provisions took force, but it's been under continuous assault since going into effect, to the detriment of the people who rely on it.

The political climate had shoppers stressed

After President Donald Trump announced he would stop making cost-sharing reduction payments to insurers, I checked in with the people I was profiling. These subsidies reward insurers who give discounts to low-income consumers and subsequently help them keep premiums affordable.

Houston resident Lacy Ward worried insurers would raise premiums so high she'd have to forgo coverage altogether or marry her boyfriend ahead of schedule. She ended up finding an affordable plan, thanks, ironically, to the very move causing her consternation.

Ward wasn't the only person I talked to who fit this pattern: freaked out before shopping for a plan, then relieved to find they would actually pay less for health care.

Trump’s decision to cut CSR funding was last on the long list of efforts he took to undermine Obamacare this year, but it had the biggest impact on the 2018 marketplace — just not in the ways most people, likely including the president himself, expected.

Insurers did raise premiums as predicted, but, at the direction of some savvy state insurance commissioners, they loaded the increases on silver-level plans. The prices of these plans are linked to premium tax credits, a form of federal help that lowers the cost of health insurance. The higher the prices of silver plans went, the bigger the tax credit people got. Suddenly, people were finding $0 bronze plans and most of the people I talked to wound up with a 2018 plan that cost less than the one they had in 2017.

The future of Obamacare is in serious peril

That boon is likely a one-time event. People who don't qualify for tax credits are finding sky-high premiums, making them less likely to enroll. The latest federal stats make it pretty clear that 2018 enrollment, while surprisingly strong, will come in lower than enrollment for 2017. A smaller applicant pool could drive premiums even higher or lead to more insurers to leave the marketplace next year (should it survive that long), sparking the death spiral Trump predicted and, in many ways, precipitated.

With all the uncertainty surrounding the law, it's easy to see why so many insurers left the marketplace. But people don't have that option. They can't opt out of worrying about their health. No matter what is (or isn’t) available, everyone I talked to, plus millions of others who aren't covered by their employers or another government program, still need health care.

Whatever happens to Obamacare, I will be thinking of them: of Corey Yates, whose medicine keeps her bipolar disorder in check; of Kathy Schermerhorn, who just started treatment for breast cancer; of Elaine Upshaw, whose diabetes and overactive thyroid will go untreated next year unless she can find a way to pay for coverage; and of all the people who worry about the cost of getting sick or injured in this country.