Suddenly, rooting for Republican defeat is the cool thing for GOP pundits

It's easy to say the Republican Party has lost its way. But it's hard to find the truth of why it happened 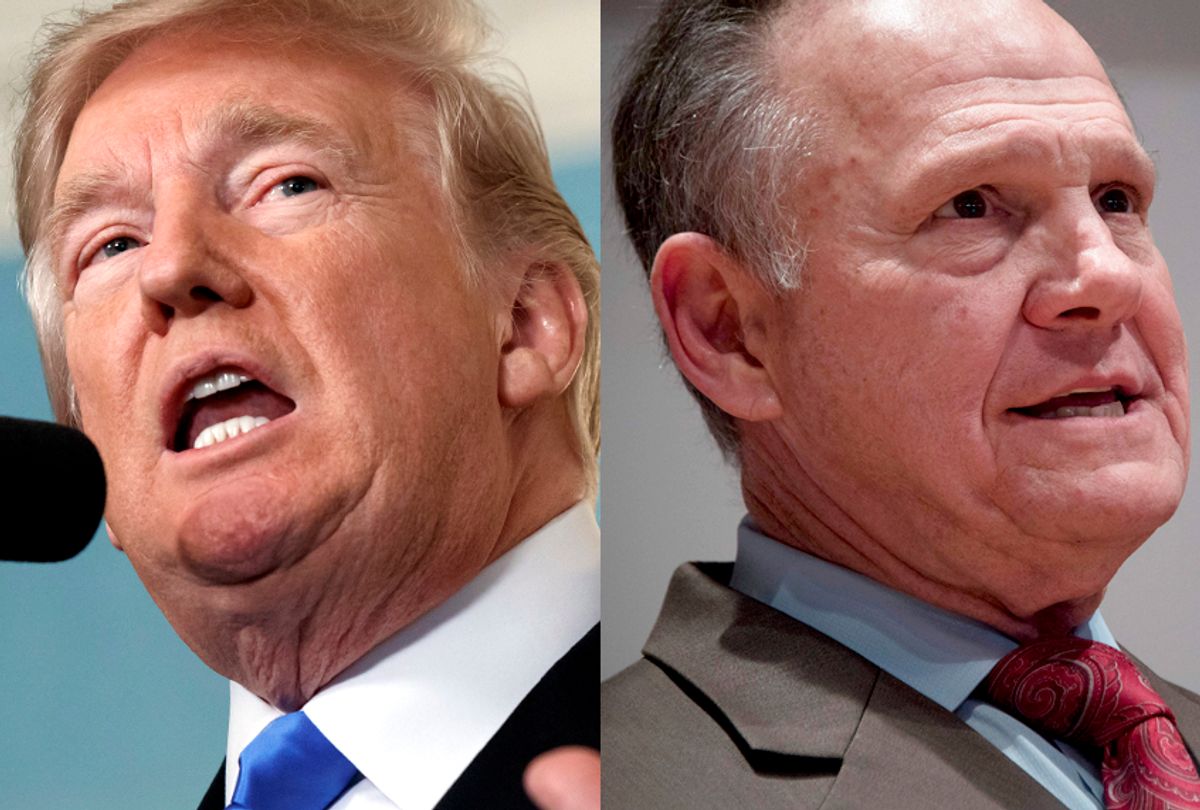 The latest example of this comes from Michael Gerson, who writes in The Washington Post that the party should stop supporting candidates like Roy Moore, an option Republicans apparently keep forgetting. But Gerson wants a purge-based purity of the Republican Party — and that's been done countless times:

Even if moral arguments do not suffice, the political ones are compelling. Trump and his allies are solidifying the support of rural, blue-collar and evangelical Christian whites at the expense of alienating minorities, women, suburbanites and the young. This is a foolish bargain, destroying the moral and political standing of the Republican Party, which seems complicit in its own decline. It falls to Republican voters to end this complicity.

For the record, Republicans have been moving right for years, fielding a host of fringe candidates along the way. Some of them, like Roy Moore in 2016, Christine O'Donnell in 2010 and Todd Akin in 2012, won their Republican primaries and then failed miserably in their respective general elections. Others, like Kelli Ward, didn't even win their primary challenges.

And then there were the Republicans like Jan Brewer who actually won.

Here's the situation the Republican Party is in: For eight years they were the party out of power and could make plenty of claims without having to be held to them. For the first two years of President Barack Obama's first term, they were completely on the outside. Then, after they won the House in 2010 and the Senate in 2014, they made a promise to the American people that they would actually pursue their agenda if only given the chance.

There was also the problem that in their strongest years — 2010 and 2014 — Republicans benefited from a depressed turnout that skewed white and older. When the 2012 presidential election came along, Republicans were hurt because younger Americans and minorities voted, and not for them. And, just this week, Republicans were hurt when Alabama's black population went to the polls to vote against Moore.

After Mitt Romney failed to win the 2012 presidential election, the biggest criticism from the right was that Romney had "squishy" positions on the Republican dual bugaboos of abortion and gay marriage. Even before he won the nomination, he was viewed as a "centrist" candidate — mostly because, as Michael Medved noted in 2011, he didn't have the "anger and indignation" that the conservative base would find four years later in Donald Trump.

There is only one thing that's holding the current Republican Party in power, something that the moderate wing and radical Freedom Caucus can agree on. That's tax cuts. And even though the effects of this tax bill are absolutely terrible, Republicans will come together to pass it, because it's their raison d'etre.  Nothing else will get done, but it doesn't matter. They don't care about doing anything else.

There's one big reason the modern Republican Party is divided: The few multi-billionaires who bankroll the party are also divided. Ten days ago, Quartz looked into the three mega-donor families — the Mercers, the Kochs and the Adelsons — who are playing a game of tug-of-war for control.

But since Trump, with no ties to either camp or its ideology, defeated a raft of other candidates for the presidential nomination last year, the Republicans have been cast into a growing civil war between mainstream conservatives, Tea Party-inspired libertarians, and the xenophobic and misogynistic groundswell that Trump has proven expert at tapping into. These schisms reflect genuine divisions in the Republicans’ voter base—and the Mercers, the Kochs, and the Adelsons are adept at exploiting them.

Now, nature abhors a vacuum, and that's where President Donald Trump comes into play. Because there are no adults in the party to counter Trump — at least, not publicly — the president is able to say what he wants and do what he wants, and no one will check him.

But somehow, despite all of the ills of the Republican Party, they'll still win elections — a lot of them, too. In 2016, Republicans benefited from, as Brookings called it, a "seat bonus." Nationwide, GOP candidates received 49.9 percent of the votes in House races, yet won 52.2 percent of the seats. That happened in Senate elections, too: More votes were cast for Democrats, but Republicans won more seats. The GOP has also benefited from the greatest political Affirmative Action program of all time: the Electoral College, which led to a president who lost the popular vote by 2.87 million being sworn in this year.

But maybe it's time for Republicans to start looking at the bright side and enjoying the time they still have in power before the Democratic wave everyone says will happen hits in 2018. They could still pass their tax cut — and let someone else deal with the massive debt ramifications later.