Ballet companies throughout the U.S. reimagine “The Nutcracker”

An '80s hip-hop version in Brooklyn and a whaling industry show in Massachusetts, “The Nutcracker” can do it all 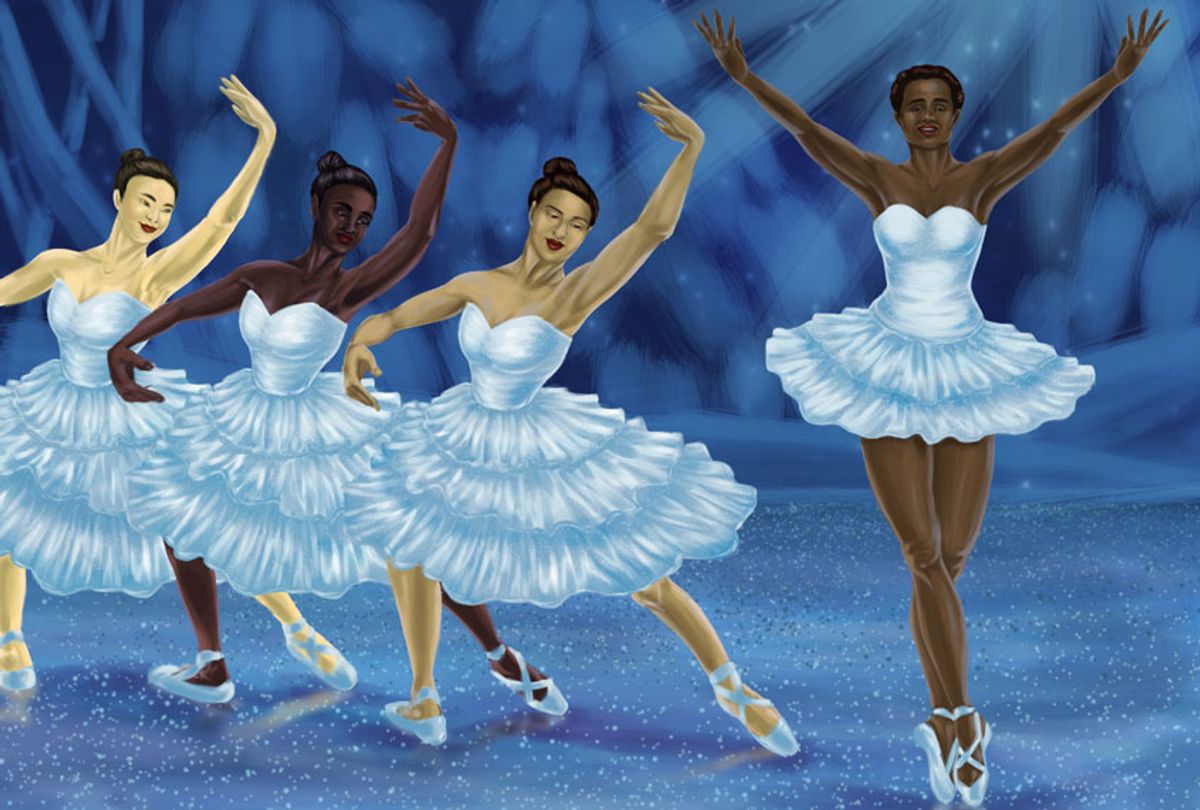 “It’s fair to say you’ve never seen a musical quite like this,” says Kevin Weisman (best known for his role in “Alias”) during the introduction for “The MeshugaNutcracker.” A Jewish take on the classic Christmas ballet, “The MegshugaNutcracker” opens with a call to “grab your yarmulke, it’s time for Chanukah, a musical just for you, whether gentile or a Jew.”

This open-arms approach prevails across the numerous “Nutcracker” adaptations showing all over the U.S. this season. From the San Francisco Lesbian/Gay Freedom Band’s “Dance-Along Nutcracker” to the New Bedford Ballet’s historical whaling production, “A New England Nutcracker,” the message of “anyone can watch” is echoed throughout performances that interpret Tchaikovsky’s score in new — and distinctly American — ways.

Although “The MeshugaNutcracker” takes place in Chelm, a historically small, comical, Polish town in Jewish folklore, it covers serious topics like Nazism and feels anything but provincial with its crisscrossing cultural identities. For example, the show’s creators adapted the original Tchaikovsky score by “giving it this klezmer Broadway fusion interpretation,” said Shannon Guggenheim, one of the creators as well as a performer. “When you’re listening to the Chinese tea song, it’s actually the song of the dreidels.”

The show started in 2003 with the aim to serve the San Francisco Bay Area’s “five major Jewish communities,” explained Guggenheim, who converted to Judaism the year before marrying her Jewish husband, also her “MeshugaNutcracker” co-creator, Scott Guggenheim. While the show is still “completely Chanukah,” it also aims to please non-Jewish viewers. Since all sorts of people who grew up in the U.S. were unable to escape the ubiquitous “Nutcracker,” Tchaikovsky’s score is widely familiar and beloved. “The strains of ‘The Nutcracker’ are so much a part of our culture, and to borrow from that and give ‘Nutcracker’ lovers another ‘Nutcracker’ is fun,” said Guggenheim.

Meanwhile, not so far away in the Bay Area, the San Francisco Lesbian/Gay Freedom Band is “in full recovery mode” from their four “Nutcrackers of the Caribbean” performances, which spanned December 9 and 10.

This “dance-along” version of “The Nutcracker,” explained Doug Litwin, the garrulous president of the band, was the “brainchild of a couple people in the organization who had the idea to do something different . . . that was targeted only at the LGBT community” when it began in 1985. The show has always relied on Tchaikovsky’s score, throwing in additional “holiday-focused” songs and, when the performances started to become themed, tunes that fit each year’s subject.

The performance has two main characteristics. One, it’s a “dance-along,” so it involves audience participation. Though the show was originally just intended for the “gay community,” said Litwin, “in the early to mid nineties, the show started to evolve . . . a lot of kids were in the audience.” Young boys and girls dressed up for the show would “gravitate around” six-and-a-half-foot-tall drag queens, and the community surrounding the show expanded to include a more diverse crowd.

Its second key characteristic, the “Dance-Along Nutcracker” always features a “teachable moment.” This year, it bemoaned the lack of school funding for music programs. Drosselmeyer, who gives protagonist Clara the nutcracker in the traditional ballet, showed up dressed like a pirate in this year’s dance-along. His reason, described Litwin, was that he’d learned “there’s no money in teaching music anymore,” so Drosselmeyer planned to “raise money for restoring school music programs the old fashioned way, by being a pirate.”

The “Dance-Along Nutcracker” tries to keep these morals “trendy” while avoiding the overtly political. “The audience is people from the San Francisco area,” Litwin explained. “Not everybody here thinks the same, so we try to keep it entertaining, teachable but not too far out on the left extreme or the right extreme.” As the country struggles through unprecedented partisan turmoil, an LGBT “Nutcracker” performance reminds us that our politics needn’t drift to the extremes.

San Francisco hosted the country’s first ever performance of “The Nutcracker” in 1944, perhaps part of the reason behind the area’s multiple, unique performances. Though not necessarily poorly received in Russia, where the ballet originated, “The Nutcracker” only became a massive holiday hit in the States. “While the story takes place in Christmas, it wasn’t a holiday tradition [in Russia],” said Mikko Nissinen, the Boston Ballet’s artistic director and choreographer for the company’s “Nutcracker.” “I call it, ‘The Nutcracker’ was reborn in America.”

Nissinen studied ballet in Russia, as did George Balanchine, one of the key players in first putting “The Nutcracker” on American soil. Balanchine, a choreographer who’d danced the ballet himself in Russia, had dinner with fellow choreographer William Christensen and his brother Lew (who had also worked with Balanchine, as a dancer in New York) in Salt Lake City pre-1944. They discussed their mutual desire to bring “The Nutcracker” stateside. The Christensen brothers, from Denmark, put their heads together with the Russian ballet dancer-cum-choreographer over the meal, thus creating an authentic American product — one that was born overseas but came into its own here, thanks to multiple foreign influences.

“America is such a wonderful melting pot,” said Nissinen, “and you know, while ‘The Nutcracker’ takes place in southern Germany, it is about this little girl and her dream, and she dreams about these international dolls. That’s why in the second act there’s an Arabian dance, Chinese, Russian . . . ”

“Melting pot” came to mind for multiple people discussing their adaptations of “The Nutcracker” and how they relate to the U.S., the country where this ballet found its most enthusiastic home.

“I hope the takeaway when you see the show is America may be a melting pot, which has pros and cons, certainly . . . but at the end of it we’re all just trying to experience this life together and find the good in each other,” said Guggenheim of “The MeshugaNutcracker.”

The San Francisco Lesbian-Gay Freedom Band’s “Nutcracker” seeks to spread this positive message, too. Initially, it targeted a very specific geographic and cultural crowd. Now, the City of Chicago Department of Cultural Affairs puts on its own adaptation of the dance-along show every December. “They don’t go to the great lengths we do to create an entire show out of nothing every year,” said Litwin, “but that’s an example of how the concept has been exported to another city.”

A hip hop version of “The Nutcracker” (appropriately titled “The Hip Hop Nutcracker”) takes place in current-day Brooklyn, where “Drosselmeyer, Maria-Clara, and her Nutcracker prince travel back in time to the moment when her parents first meet in a nightclub” in the 1980s. Though set in Brooklyn, the performance travels all over the country, from Tacoma, Washington, to Charlotte, North Carolina.

Other versions remain tethered to more specific locations. “The Prairie Nutcracker,” which showed this year in Hutchinson, Kansas, but also made it to Omaha, Nebraska, in 2003, “celebrates the hardworking roots of America’s pioneers and their simple holiday customs.” The target audience includes not just “farmers and businessmen,” according to the show’s website, but also “the very young and the young at heart.” The New Bedford Ballet in eastern Massachusetts put on “A New England Nutcracker” this year. Set during New England’s whaling days, the ballet features “Moby Dick” author Herman Melville as a party guest.

This may be true from a classical ballet standpoint. But in the U.S., “The Nutcracker” is about the “rendition of the rendition.” That’s what gentiles and Jews, farmers and businessmen, hip hop enthusiasts and whaling historians love about it.