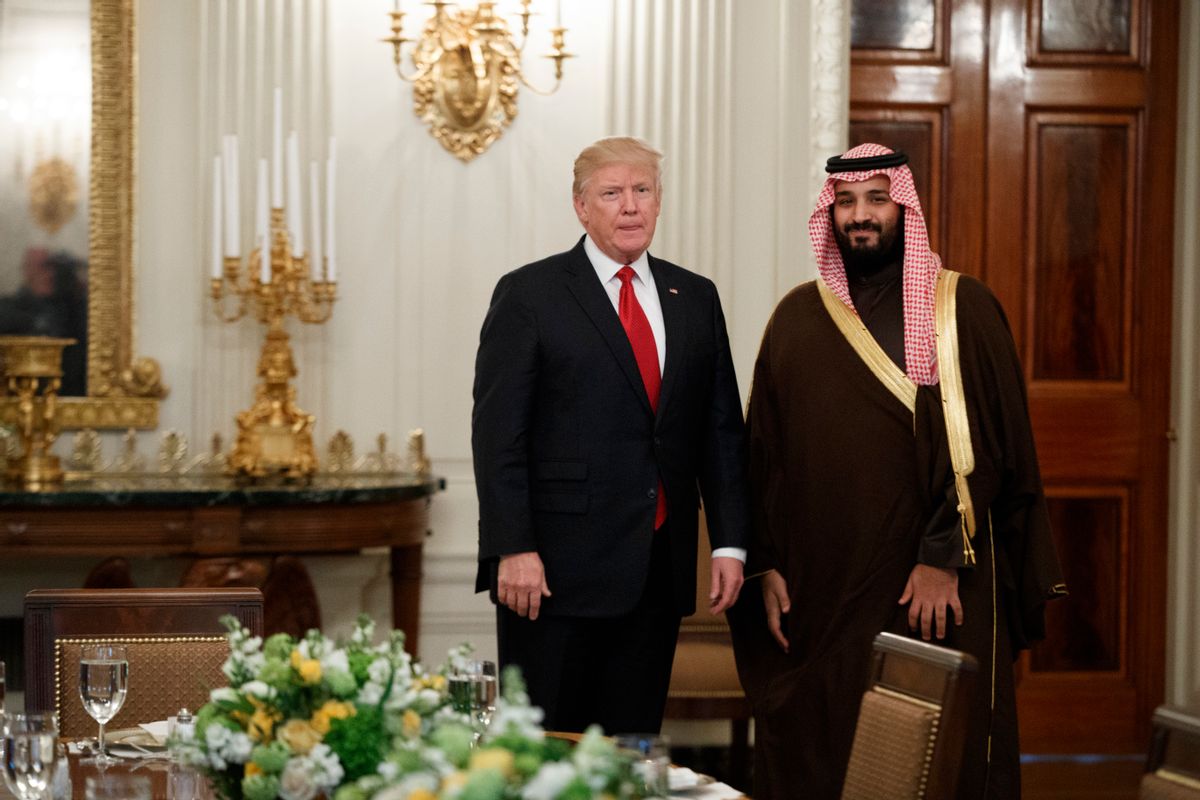 FILE -- In this Tuesday, March 14, 2017 file photo, President Donald Trump stands with Saudi Defense Minister and Deputy Crown Prince Mohammed bin Salman before lunch in the State Dining Room of the White House in Washington. With an eye toward Washington, leaders of a fractured and conflict-ridden Arab world hold their annual summit Wednesday, March 29, 2017, seeking common ground as President Donald Trump weighs his approach toward the region. The stalled Palestinian quest for statehood, is an issue that host Jordan says will take center stage. (AP Photo/Evan Vucci, File) (AP)
--

When Saudi Arabian police arrested a dozen princes, ministers and a billionaire investor in the span of one night, many interpreted the move as Crown Prince Mohammed bin Salman flexing his muscle. "The sweeping campaign of arrests appears to be the latest move to consolidate the power of Crown Prince Mohammed bin Salman, the favorite son and top adviser of King Salman," wrote the New York Times on the day after the raid.

Indeed, heir apparent Crown Prince Mohammed bin Salman may already be running the show in Saudi Arabia, as his father, the absolute monarch Saudi King Salman, is widely regarded to be suffering from deteriorating health. These sweeping arrests, along with the Crown Prince's announcement of a slate of reforms — including allowing women to drive and enter sports stadiums, and ending a ban on movie theaters — seemed poised to reorganize major aspects of Saudi society and life.

Yet while Mohammed bin Salman's reforms have been playing out, in the background the Crown Prince has been on a quiet shopping spree, spending billions on yachts, art, and now, an opulent French estate.

The Times reported today that Crown Prince Mohammed bin Salman was behind the 2015 purchase of a $300 million chateau outside of Versailles. The opulent mansion features a "gold-leafed fountain, marble statues, and [a] hedged labyrinth" on a 57-acre plot.

The identity of the buyer of the chateau was obscured by shell companies around Europe, suggesting that Crown Prince Mohammed bin Salman did not necessarily want his purchase known.

Recently, the Crown Prince was also the buyer of a 440-foot yacht, for which he paid a reported $500 million; and a Leonardo da Vinci painting, "Salvator Mundi," for $450 million. Those three purchases alone add up to $1.25 billion — about equivalent to the gross domestic product of the Solomon Islands. It is unclear if the da Vinci painting was a personal or an institutional purchase; it is described as planned to be put on public display at the Louvre Abu Dhabi.

For two years, Crown Prince Mohammed bin Salman was successful at obscuring his purchase of the French chateau. And it makes sense that he would want to hide his absurdly expensive tastes and the jetsetting freedom that accompanies. While his home country is relatively affluent, largely due to oil exports, it is considered an authoritarian regime by most analysts. Within the country, human rights abuses run rampant. "In 2016," wrote the NGO Human Rights Watch, "Saudi authorities also continued their arbitrary arrests, trials, and convictions of peaceful dissidents. . . . Dozens of human rights defenders and activists continued to serve long prison sentences for criticizing authorities or advocating political and rights reforms. . . . Authorities continued to discriminate against women and religious minorities.

The Kingdom imports many migrant workers from other parts of the world, particularly Southeast Asia, to work in Saudi Arabia; lured by the promise of high wages, many arrive to find themselves treated like second-class citizens, overworked or glorified indentured servants. A Reuters report from 2016 described the life of a group of exploited migrant workers in a labor camp in Qadisiya, Saudi Arabia:

Migrant construction workers, abandoned in their thousands by Saudi employers in filthy desert camps during the kingdom’s economic slump, say they will not accept a government offer of free flights home unless they receive months of unpaid wages.

The plight of the workers, stranded for months in crowded dormitories at labor camps with little money and limited access to food, water or medical care, has alarmed their home countries and drawn unwelcome attention to the conditions of some of the 10 million foreign workers on whom the Saudi economy depends.

The incongruity between Crown Prince Mohammed bin Salman's life of excess, and the everyday oppressive existence of many residents of the Kingdom, exposes a double standard in Saudi Arabian society. Indeed, the inequality between royal haves and Saudi have-nots is more egregious in context: the House of Saud is estimated to have assets totaling $1.4 trillion — twice the value of the Kingdom's annual GDP.