Sorry, NRA: The U.S. was actually founded on gun control

If you study your history, you'll see it. Start with James Madison's first draft of the Second Amendment 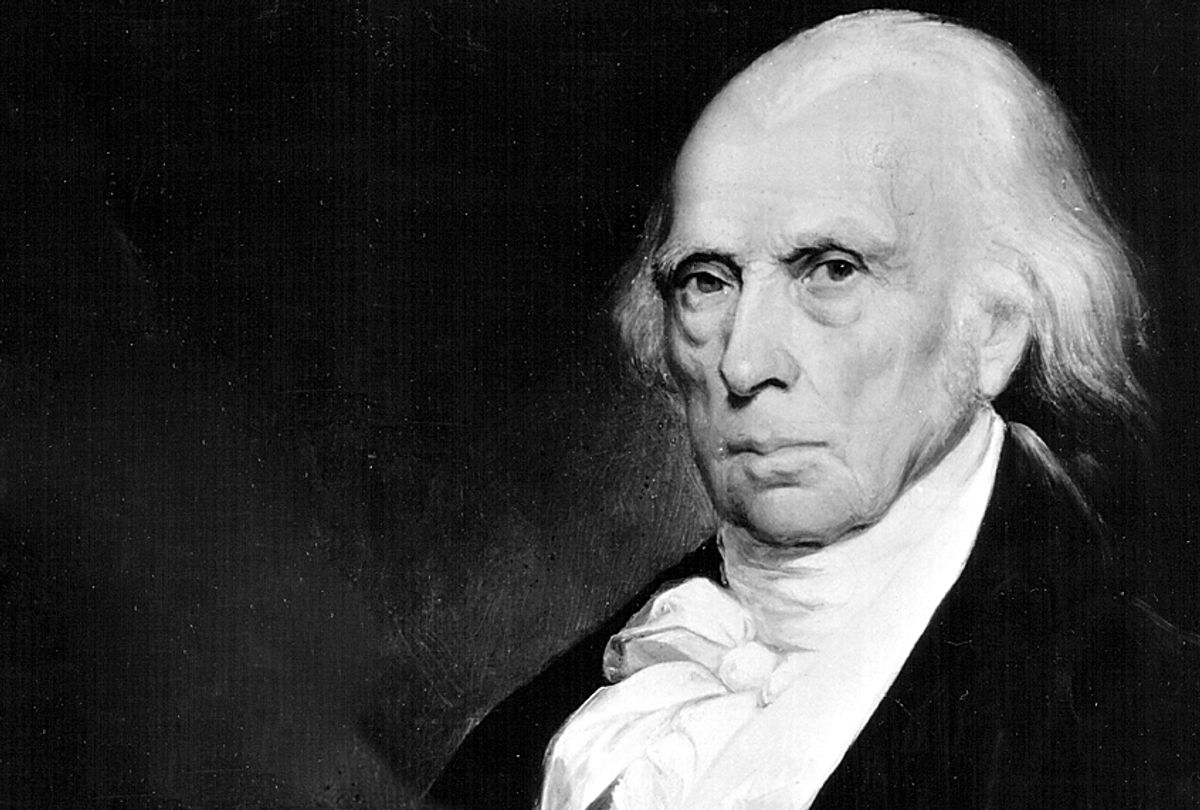 At this writing, there have been over 1,500 gun-related homicides in America since the Las Vegas massacre on October 1, 2017 when 58 people were killed and 546 wounded, right on track with the national average of 1,000 gun deaths per month for the last two years.

Now that we have your attention, let’s consider the case made by the NRA, its Congressional hired hands, the majority of the Supreme Court, and various right wing pundits who claim the Second Amendment is not simply about state militias but guarantees the unfettered right of everyone to own, carry, trade and eventually shoot someone with a gun.

It is a case we spent some time investigating while writing about the Constitution, the Bill of Rights and its author James Madison, for our book “The Grouchy Historian.”

First, here’s that elusive Second Amendment as it now appears in the Bill of Rights: “A well-regulated Militia, being necessary to the security of a free State, the right of the people to keep and bear Arms, shall not be infringed.”

Arguably not the clearest amendment in the Constitution. And that’s the problem with it: While stating the need for a “well-regulated Militia,” does it at the same time also guarantee the individual citizen the personal right to “keep and bear arms?” In 2008, Justice Antonin Scalia, ruling for the Majority, said that it was. Ignoring over 200 years of precedent, historical context, the Framers’ Intent and the D.C. laws of its elected officials, Scalia relied solely on the text, arbitrarily dividing the Amendment into two parts. The first – “a well-regulated militia, being necessary to the security of a free State” — he called the prefatory clause. The second part – “the right of the people to keep and bear Arms, shall not be infringed” — he called the operative clause. Claiming that second part was all that really mattered; Scalia discarded as irrelevant that inconvenient reference to a “state militia.”

As pointed out by Professor Michael Waldman (in his "The Second Amendment, A Biography"), Scalia’s truncated portion of the Amendment just happened to be the exact same words inscribed on the wall of the NRA headquarters’ lobby! Coincidence?

The question we now ask is why did Scalia come up with this odd “grammatical” theory nobody's ever heard of, then or since, while abandoning his much-beloved Originalism — his precious methodology for interpreting the Constitution based on the Framers’ thinking at the time?

Probably because Scalia didn’t want to admit what James Madison — the author of the Amendment — had in mind.

Here is Madison’s first draft of the Second Amendment:

“The right of the people to keep and bear arms shall not be infringed, a well-armed and well-regulated militia being the best security of a free country; but no person religiously scrupulous of bearing arms shall be compelled to render military service in person.”

Madison’s intent could not be more obvious: his Second Amendment refers only to state militias. If not, why include that exemption for what we now call “conscientious objectors?”

When Madison’s amendment was rewritten by a joint committee from the House and Senate in 1791, the “religious” exemption was lopped off as too cumbersome in language and too complex to enforce. Thus, the Amendment as it now stands.

But Madison’s original intent remains and is there hiding in plain sight for any Supreme Court Justice who takes the pains to look for it. The gun crowd and their apparatchiks ignore, as well, the very reason the Second Amendment got into the Constitution in the first place: to calm the anti-Federalists’ fears of the establishment of a standing army. The Second Amendment is, in fact, Madison’s (and the Federalists’) response to those who felt threatened that the strong central government, as proposed in the new Constitution, might disarm the state militias. And to miss that connection is to . . . well, miss everything.

As written, the Second Amendment follows closely in meaning and in language previous state and national Constitutions – all of which explicitly refer to militias and not individuals.

The Articles of Confederation — the U.S. plan that preceded the ratification of the Constitution — put it this way:

“... every State shall always keep up a well-regulated and disciplined Militia, sufficiently armed and accoutered, and shall provide and consistently have ready for use in Public stores, a due number of field pieces and tents, and a proper quantity of arms, ammunition and camp equipage.”

Of all the 13 state Constitutions, only one — Pennsylvania’s — granted the right of an individual to own a gun. And even that Constitution gave the state the right to disarm people “for crimes committed” or “real danger of public injury from individuals.” As always, our American forefathers limited any and all freedoms when they clashed with public safety.

In fact, the Constitution was written, a new nation conceived and a more perfect union formed because the Founders were afraid of guns — and the wrong hands they might fall into. Not just slaves. Not just Native Americans. But poor white men. Hell, the Framers didn’t want everyone to have a vote, let alone a gun.

What we’re saying is: this country was founded on gun control. Here’s what we mean: In 1786, a man in rural Massachusetts named Daniel Shays led a protest of 4,000 outraged citizens — mostly farmers and ex-Revolutionary War veterans — against high taxes, foreclosures and bankruptcy proceedings. Unarmed, they were marching toward the armory in Springfield — to get guns — when the state militia subdued the rebellion. This seminal event in American history scared the livin’ bejesus out of the Founders. To them, the rebellion proved the failure of the Articles of Confederation and the urgent need for a new and strong central government. It was that dread over Shays’ Rebellion and the anarchy it represented that kept the Framers glued to their Windsor chairs during that hot Philadelphia summer of 1787.

And yet today, despite the evidence, the gun lobby has the chutzpah to claim that the Second Amendment belongs to them and them alone. Guns, you say, will always be with us. OK, we get that. But what’s at issue is whether the Second Amendment can be read as a fundamental and absolute right (as the NRA claims) that can neither be limited nor regulated.

There are two sides to that issue: On one side we have the Founders. For example, James Madison who, as a young member of the Virginia legislature, introduced a bill for the “Preservation of Deer” which penalized persons “. . . who shall bear a gun out of his enclosed ground unless whilst performing military duty. . .”

Then there’s the other side: the NRA and its fellow travelers of Republican legislators, right wing think tanks and cable TV know-nothings — all bloodied but unbowed.

The question then is: Whose side are you on?

The answer is a matter of life or death.

Ed Asner is a television legend, well known for his role as Lou Grant on "The Mary Tyler Moore Show" and subsequent spin-off Lou Grant. He is the winner of seven acting Emmy Awards, and has been nominated a total of twenty times. Asner also made a name for himself as a trade unionist and a political activist. He served two terms as president of the Screen Actors Guild, from 1981-1985, during which he was an outspoken critic of former SAG President Ronald Reagan, then the US president, for his Central American policy. He lives in Los Angeles.

Ed. Weinberger began his career in the early 1960s with Dick Gregory and has written for such diverse comedians as Bob Hope, Richard Pryor, and Johnny Carson (for five years on "The Tonight Show"). He wrote for and produced "The Mary Tyler Moore Show", co-created "Taxi," "Dear John" and "The Cosby Show." He also executive-produced and created "Amen," "Sparks" and "Good News." He has won three Golden Globe Awards, a Peabody, and nine Emmys. In 2000, he received The Writer’s Guild of America Lifetime Achievement Award. He lives in Los Angeles.