In a year that went from bad to worse and worse still, here are 10 fearless movies that gave us hope for the future 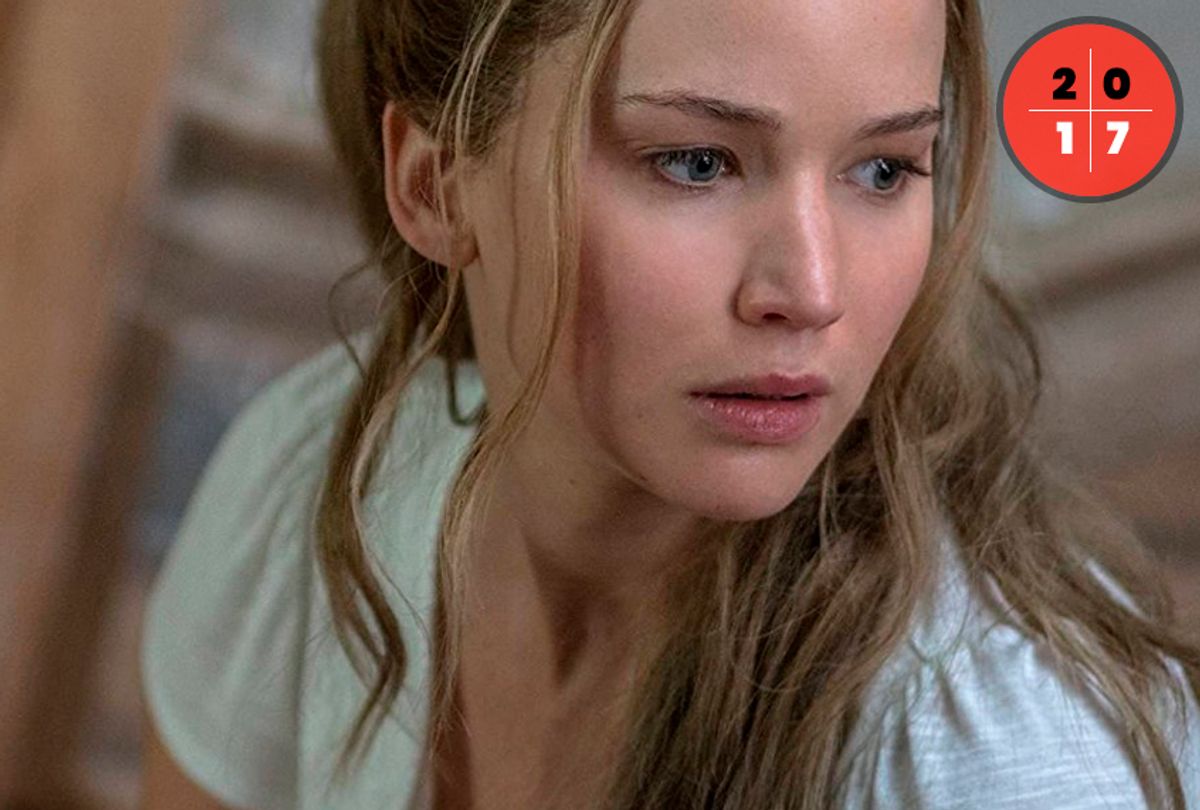 “Now you’re in the sunken place,” that line from Jordan Peele’s phenomenal success, “Get Out,” may be the mantra for 2017. The year sunk from low to lower to still even lower what with Trump, the sexual harassment scandals that rocked Hollywood and politics, and more Trump. Did anyone else feel like they’d had a cup of Missy Armitage’s tea? Or wanted one?

Thankfully, there were some films to distract me from the relentless horrorshow. Maybe it is a sign of the terrible times, but I gravitated to idiosyncratic films that didn’t play things safe; films that made me uncomfortable as Chris Washington (Daniel Klauuya) in “Get Out.”

Looking back on films in 2017, there were two movies in particular that were so far-out and fucked-up they made me itchy and giddy. They are simultaneously flawless and flawed — but that is why I loved them so much. There were at least half dozen other films that also got under my skin in ways that wowed me and disarmed me, made me think, laugh, and cry at the same time. Those are the Best Pictures of the year for me; the films I will remember and watch again. Because I think films should generate a reaction — even if it’s anger.

Here is my totally personal, take-no-prisoners Ten Most Memorable Films of 2017:

1. The most polarizing, thought-provoking, argument-starting, dizzying, dazzling, love-it-or-hate-it you can’t shake it from your system film this year was Darren Aronofsky’s allegorical “mother!” Whether viewers see all the biblical references, or think it’s about the desecration of mother earth, or believe it to be a stinging social commentary, the film is absolutely thrilling, eye-popping, head-scratching, and riotous at the same time. Mother (Jennifer Lawrence), a pregnant woman, and Him (Javier Bardem, typecast as God), is a writer in a creative slump. They live in a big old, possibly crumbling house in the middle of nowhere. When an uninvited guest (Ed Harris) and his wife (a hilarious Michelle Pfeiffer) drop by and stay over, they destroy everything, especially His’ precious perfect crystal. Then things get seriously weird, and Aronofsky’s film gets as unhinged as its title character. “mother!” goes wildly off the rails with ecstatic gonzo sequences that need to be experienced.

Not everyone loved “mother!” It was a flop at the box office, and earned that rare F from Cinemascore in an audience exit poll. But it begs viewers to engage with it even as it challenges them. Jennifer Lawrence is shot in intense close-up for almost half the film that it becomes hypnotic or hateful. Bardem is both seductive and irritating as a writer who refuses to listen to his wife; you love to hate him. And the house, which Mother never gets to leave, is pretty fabulous.

“mother!” deliberately did not please everyone — after the film, my friend Jimmy quipped, “’mother!,’ may I have my $10 back?!” — but as I said, the best films polarize viewers.

2. The other deliriously insane film I saw this year was “The Book of Henry.” When it ended, I said to my friend Keith, “There’s one thing I didn’t understand: What the fuck was that?!” To which he replied, “I thought it was a comedy!” Director Colin Trevorrow’s film, based on a script by Gregg Hurwitz, is relentlessly and unintentionally hilarious. It’s a quirky teen film that features brain tumors, child abuse, and suicide. Henry Carpenter (Jaeden Lieberher), is a boy genius. He plays the stock market well so his single mother Susan (Naomi Watts), can quit waitressing and get rid of the beat up old car she loves. He develops elaborate Rube Goldberg contraptions that his bullied younger brother Peter (Jacob Tremblay), admires. Henry also discovers that his neighbor Glenn (Dean Norris) is abusing his daughter Christina (Maddie Ziegler). So Henry creates a book that outlines an elaborate plan for his mother to execute to save Christina from more abuse. It’s already far-fetched and credulity straining, but “The Book of Henry” goes for broke repeatedly. From a sequence where Susan follows Henry’s pre-recorded plans — which include him anticipating her confusing right and left — to a has-to-be-seen-to-be-believed climactic sequence where Trevorrow cross-cuts between the school talent show and Susan speeding off to take out Glenn with a rifle. Yes, this is a film that features teens and pre-teens burping and dancing on stage one minute, and crackerjack-timed “La Femme Nikita” hit-man suspense the next. But wait, there’s more! A touching pieta scene is meant to jerk tears from viewers. Instead, I welled up with tears when Sarah Silverman, as Susan’s wacky bestie, fights-flirts with Henry in a hospital room. The film is also not without romance, as the dreamy Lee Pace plays a dreamy doctor who meets, cares for, and is patient with Susan. “The Book of Henry” deals with grief and trauma in unusual — extremely unusual! — ways, which is both headscratching and heartrending. I’ve never seen anything like it. This child’s fever-dream of a film is wrongheaded in all the right ways.

3. “Columbus” by writer/director Kogonada, was the most satisfying, heartbreaking film I’ve seen all year. Shot in Columbus, Indiana (yes, VP Pence’s home town), every image is freighted with meaning. The story has Jin (John Cho in a leading man role he deserves) arriving from Korea to care for his ailing father. He meets Casey (Haley Lu Richardson in a breakthrough performance), a young woman whose dreams are on hold as she is stuck in town, caring for her mother. The pair develops an intense friendship. They talk. They listen. They discuss architecture. When Jin asks Casey why she likes a particular building, the exchange is breathtaking. It may sound dull or didactic, but trust me, it is neither. Koganada and his two leads make “Columbus” hypnotic and moving. This quietly powerful film is achingly beautiful both visually and emotionally. For me, it was extraordinary.

4. If “Columbus” was a minimalist masterpiece, “Endless Poetry” was a maximalist one. Alejandro Jodorowsky’s latest semi-autobiographical film was a vivid, sensorial experience from which I’ve still not recovered. And I don’t want to. The film has Alejandro (Adan Jodorowsky, the director’s own son) forging his way as a poet in 1940s Chile against his father’s Jaime’s (Brontis Jodorowsky’s) wishes. This is a film where writing and self-determination is perhaps more important that a father’s love. Jodorowsky creates such vivid and impassioned work of art — everything here is beautiful even when it is so gleefully over the top — it becomes impossible not to be seduced by the fantasia. From eye-popping street parades, to the frequent full-frontal nudity, to the remarkable opera singer Pamela Flores in a double role as Alejandro’s mother as well as a flame-haired woman who inspires and seduces him, the film is endlessly entertaining. And the exchange between father and son in the end is as powerful as the one in “Call Me by Your Name.”

5. “Good Time” I don’t think I had a better time in the theatre this year than during the 100 harrowing minutes of Benny and Joshua Safdie’s white-knuckled thrill-ride called “Good Time.” An exceptional Robert Pattinson (who proved that his turn in “Cosmopolis” was no fluke) plays Connie a not-to-bright bank robber who makes one bad decision after another trying to raise enough money in one night to save his disabled brother (Benny Sadie) from jail. Tightly plotted, darkly funny, nasty, nasty, nasty, and featuring at least one plot twist that viewers will never see coming, “Good Time” delivered on the promise of its title.

6. “Lady MacBeth” William Oldroyd’s film debut was a shocking, stunning drama aided in no small part by Florence Pugh’s astonishing performance. A young bride (Pugh) rebels against patriarchy by having an affair with Sebastian (Cosmo Jarvis), a worker on the estate. How things play out  — hint, there is murder. More than one, really — is spellbinding. Oldroyd shoots his film in vibrant color but with minimalist design. Pugh practically rips your heart out as you watch her suffer, become empowered, and then wreck havoc on those who have wronged her. It’s both devastating and fabulously satisfying.

7. “The Wound” by John Trengove, infected me more than any other film this year. This was an intense, exceptional film about an unusual topic — male initiation rituals in the Xhosa culture — and it featured a helluva performance by Nakhane Touré as a gay man trapped in a love triangle. “The Wound” took me to a world I’d never seen before, and I found it fascinating and unforgettable. I’ve been championing the film since I saw it at a fest in April, through it’s theatrical release in August, and its Oscar campaign for Best Foreign Language film; it’s presently on the shortlist of nominees. It is now on DVD and blu-ray. I can’t encourage viewers enough to see it.

8. “The Human Flow” Ai Weiwei’s epic documentary about the refugee crisis was an outstanding, immersive experience. It makes you feel small and uncomfortable. You watch hundreds of people trekking through rivers and streets or living in camps or detention centers for months on end, all because they need to leave their homelands. You wonder how do they do it? How would I do it? And why does anyone have to? Ai captures the resilience of these people in a way that is full of empathy and understanding. Ai’s film is a staggering, astonishing achievement.

9. “Raw” Julia Ducournau’s squirm-inducing thriller, about a vegetarian who becomes a carnivore after eating a raw kidney, was one of the most assured and daring film debuts of the year. It’s a body-horror drama full of uncompromisingly gory and ferocious scenes — that botched Brazilian wax YIKES! Ducournau offers a literally primitive metaphor for coming-of-age and female sexuality. “Raw” is a film to be seen at your own risk, but it is absolutely rewarding.

10. “Debris” I did not see a more unsettling short film this year than Julio Ramos’ “Debris.” This 14-minute gut-punch has migrant laborers getting into trouble on a construction site. It left me speechless when it screened at the Telluride Film Festival. (Fun fact: the program was curated by “Moonlight” director Barry Jenkins). It spoke volumes on greed, immigration, and ethics. It was short, sharp, and shocking. I hope more people can see it.