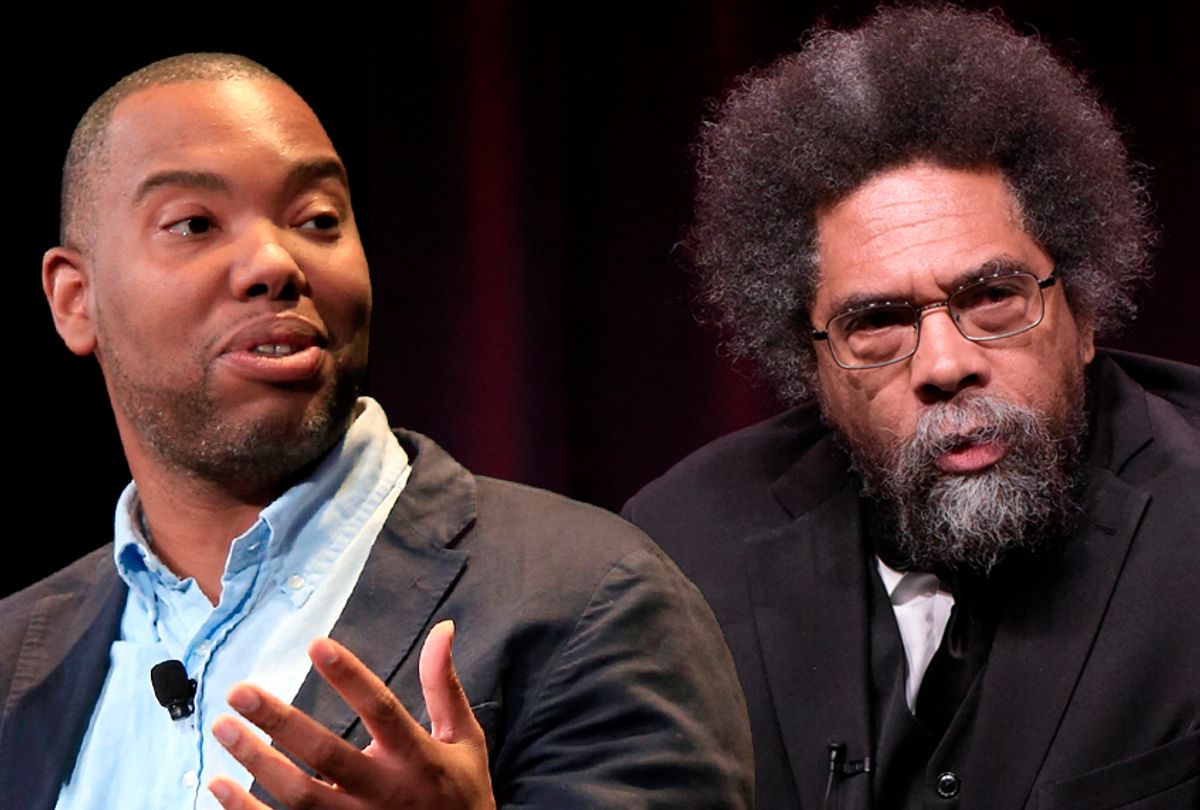 Terry pulled up on me at the car wash like, “Yooooooooooo!”

“Impossible,” I replied. “You can’t end Jay-Z. God doesn’t work like that.”

Terry brushed a stack of untitled bootleg CDs off of his passenger seat, and I sat down and witnessed history. I say history, because nobody knew that Nas would deliver one of the most compelling dis tracks ever­­ — most thought the Queens emcee was done after Jay-Z’s "The Takeover." But they were all wrong. Nas' comeback was biblical. He was David putting the heaviest rock on the planet inside his sling and slapping Goliath — Jay-Z and the Rockafella empire — in a way that changed hip hop forever.

Nas didn’t finish Jay like Terry said, but he rebooted his career with that track, and left us with the term, “I ethered you!” Being ethered means that you were basically destroyed to the point of no return. Over the weekend Cornel West, who many call the most important living black intellectual, tried to ether Ta-Nehisi Coates, who many also call the most important living black intellectual, in The Guardian, claiming, "Ta-Nehisi Coates is the neoliberal face of the black freedom struggle."

The disagreement between Coates and me is clear. Any analysis or vision of our world that omits the centrality of Wall Street power, US military policies, and the complex dynamics of class, gender, and sexuality in black America is too narrow and dangerously misleading. So, it is with Ta-Nehisi Coates’ worldview.

Coates rightly highlights the vicious legacy of white supremacy – past and present. He sees it everywhere and ever reminds us of its plundering effects. Unfortunately, he hardly keeps track of our fightback, and never connects this ugly legacy to the predatory capitalist practices, imperial policies (of war, occupation, detention, assassination) or the black elite’s refusal to confront poverty, patriarchy or transphobia.

Coates clapped back on Twitter, defending his work and highlighting the times he addressed the issues on which West accused him of being quiet. Today, the Associated Press reports Coates has deleted his account, writing, "I didn't get in it for this."

The public rift between Coates and West dates back to 2015, when Coates dropped his book "Between The World and Me," which went on to win the National Book Award. The book lifted Coates' status from popular writer to America’s number one go-to guy on issues dealing with race — Cornel West's old job. Toni Morrison wrote of Coates in her blurb for the book:

I’ve been wondering who might fill the intellectual void that plagued me after James Baldwin died. Clearly it is Ta-Nehisi Coates. The language of Between the World and Me, like Coates’s journey, is visceral, eloquent, and beautifully redemptive. And its examination of the hazards and hopes of black male life is as profound as it is revelatory. This is required reading.

West disagreed with Morrison at the time, on Facebook: “Baldwin was a great writer of profound courage who spoke truth to power. Coates is a clever wordsmith with journalistic talent who avoids any critique of the Black president in power." This launched the feud.

The internet split — some sided with Coates, others with West — just like we did with the feud between Nas and Jay. New Yorker writer and Columbia University journalism professor Jelani Cobb had the most aggressive response.

The back and forth was fun to watch, but Coates didn’t get ethered by West. Actually Cobb kind of ethered West, and in the end, it seems Nas and Jay had a more relevant beef than this. Two intellectual giants threw a lot of bullets but nobody really got hit. Both Coates and West made extremely valid points, as they always do — smart people normally do make good points, but now what? How does this transfer into anything that will help the poor, disenfranchised and incarcerated people who were brought up by both of them? I’ll answer: It won’t.

The Nas and Jay feud was superior for a number of reasons. They were both respected immensely by the people they represented. Fans from all over can quote whole Jay and Nas albums, word for word. Most kids in poverty, and that aforementioned incarcerated population — especially the ones I service in east Baltimore — have never heard of West nor Coates. They don’t read The Atlantic or The Guardian. And hip hop is an art form based on entertainment, while Coates and West are documenting, reporting and dealing with real lives. Now Coates did write the brilliant "Case for Reparations," a great piece of writing that should influence policy some way, and I don’t think West can boast a comparable feat in recent memory, though I haven’t read his complete body of work. But the most amazing ideas that can actually benefit African-Americans normally get swallowed by systemic racism, and both of these scholars have made careers out of explaining this.

The works of both Coates and West are solely based on the lives of real people who they write about or speak for — brilliantly — but to whom they never really have to be accountable. I don’t know what good works they do personally, or who they donate to,­­ so I’m not passing judgment. However, providing receipts or listing quantifiable goals that have been met would instantly silence this whole beef that shouldn’t even exist in the first place. This leads me to the most important point: There’s no leader of the black race.

I consider myself to be a student of both West and Coates, but they aren’t my leaders. I've never met them, would never answer to them, I can’t call them, their work is too complex for the reading level of many of the adults I work with, and they've not stepped foot in my community­­ — and I wouldn’t expect them to. There are leaders all over the country doing amazing work; the days of everybody praising one Dr. King type is over. There are so many black voices, and we all speak for ourselves. We all matter.

West has to understand that Coates is a writer­­, not a boots-on-the-ground activist, not a politician, not a professional protester nor an anarchist. He does research, he has big ideas that are obviously worth a lot of money, and he writes. He never claimed to be anything else, and his work is important. We need it. Just like we need West to articulate these complex issues dealing with race to Bill Maher and the Ivy League kids he teaches, who will eventually graduate and inherit the companies that oppress neighborhoods like mine.

Maybe West's teachings will or have saved some black neighborhood from being gentrified because he gave some reformed-racist rich kid an A. The fact is that wars are fought on all fronts, and we need like minds to be represented everywhere — from the court rooms and on the ground to classrooms and in law enforcement.

There’s no need for West to try to ether Coates. He didn’t create the oppressive systems that hinder people of color; he just makes money talking about them. The only thing Coates may be guilty of is taking liberal money out of West’s pockets, and if that’s the real issue, Dr. West, write about that.

To the people who dream of being the leader of the black race or having a monopoly on the extremely complex black experience: Put your money where you mouth is it, create some jobs, and go and help some real people.