As a rare General Assembly emergency session approaches, Haley warns countries that Trump will be watching 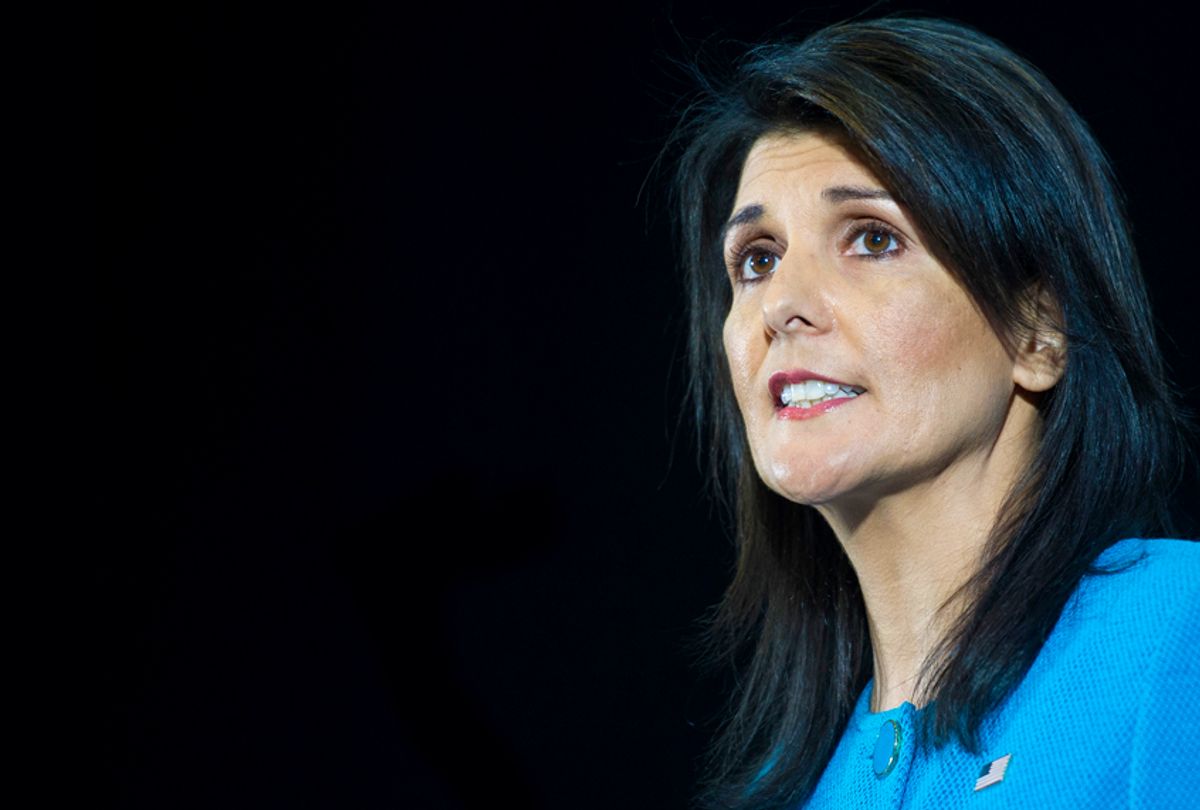 In a threat to the United Nations General Assembly, the U.S. ambassador to the international body, Nikki Haley, forewarned that the U.S. "will be taking names" ahead of a vote this week to condemn President Donald Trump's unilateral decision to recognize Jerusalem as Israel's capital, and pressure him to rescind his declaration.

"At the UN we're always asked to do more & give more," Haley tweeted on Tuesday afternoon. "So, when we make a decision, at the will of the American ppl, abt where to locate OUR embassy, we don't expect those we've helped to target us. On Thurs there'll be a vote criticizing our choice. The US will be taking names."

Haley's mafia-style threat comes as the General Assembly is expected to hold an emergency session on Thursday where a vote will be held on a resolution to oppose the Trump administration's recent Jerusalem decision, according to Reuters. The world has by and large criticized Trump's decision and has warned that it has tarnished hopes of achieving a peaceful solution.

Haley also wrote that the U.S. will remember the countries that publicly dare to criticize the country, in a letter to dozens of U.N. states.

"The president will be watching this vote carefully and has requested I report back on those countries who voted against us. We will take note of each and every vote on this issue," Haley wrote.

The call for a rare emergency session comes after the U.S. vetoed a U.N. Security Council resolution on Monday that would have made Washington rescind the highly controversial move. All 14 other council members, including longtime close U.S. allies, voted against the U.S.

Thursday's vote by the General Assembly would be not be legally binding, meaning the vote would serve as an expression of disapproval, which certainly still holds some political clout.

But Haley doesn't seem to recognize that her tactics are putting the nation down a lonely path and places it at odds with many traditional U.S. allies. Much like the president, she continues to grandstand or perform political theater in order to shield the U.S. from wrongdoing and position itself as the victim.

Trump has, however, refused to back down from his proclamation and has instead insisted that it will help with a peace process, despite widespread agreement that it only weakens peaceful solutions.

In the end, Haley's threats only ring hollow as they further isolate the U.S. and simply come off as tone deaf, short-sighted and immature.

Someone should inform Haley, who is supposed to act as a diplomat and not a Trump sycophant, that the votes are public record, so she won't need to take any names. Plenty of others quickly took notice of how harmful Haley's publicity stunts can be for the U.S. and the world order.