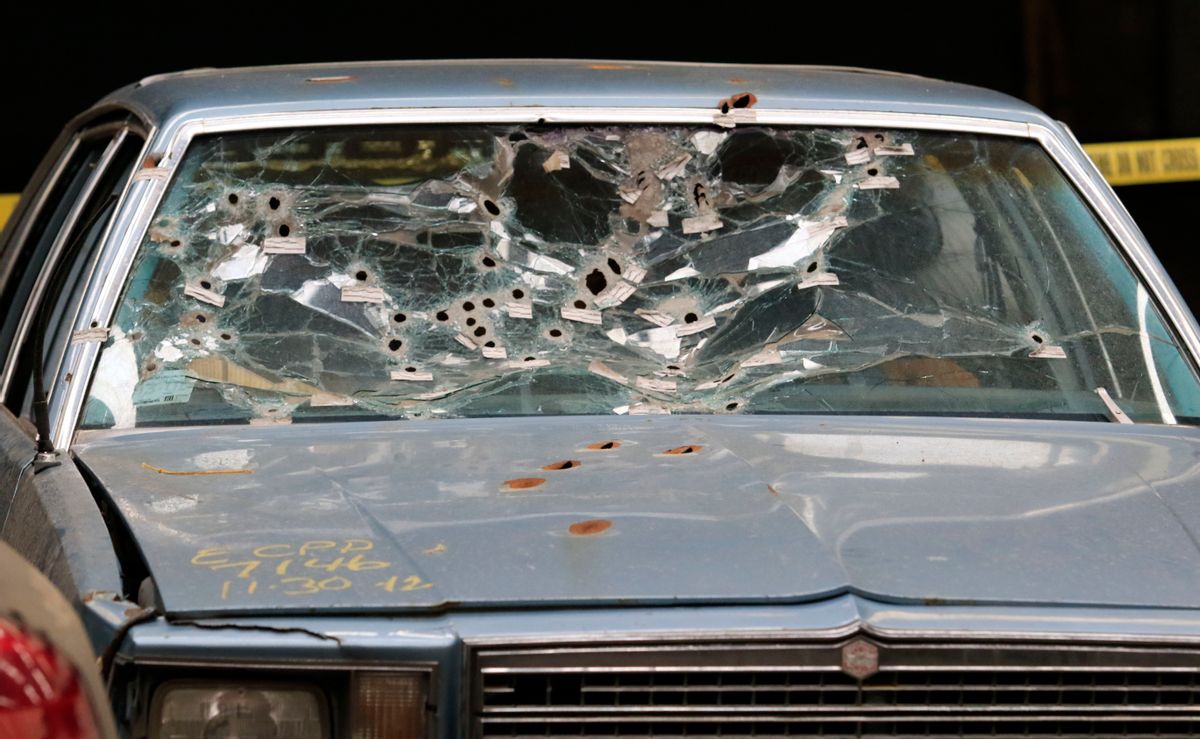 In major metropolitan areas around the country over the last half-decade, police have shot — and shot at — people in numbers dramatically higher than previous tallies suggest. A new Vice News investigation finds that between 2010-2016, cops in the 50 largest police departments in the country shot more than 3,630 people, nearly double some previous estimates. Of the 4,381 people cops fired upon in that period — including the 700 people they shot at and missed — two-thirds survived those shootings.

The data analysis also found that police shot black people “more often and at higher rates than any other race,” and “two and a half times more often than white people.” Vice found that cops shot no fewer than 1,664 black people in the period studied, comprising “55 percent of the total and more than double the share of the black population in these communities.” Twenty percent of the African Americans tallied were shot following “relatively innocuous pedestrian or traffic stops,” which was true for just 16 percent of whites shot by police. Those figures are of particular importance considering that studies find black drivers are more likely to be stopped by cops based on less evidence, less likely than their white peers to be spoken to respectfully during those stops, and more likely to be ticketed and arrested than white drivers.

While police narratives of shootings studied by Vice suggest the majority of blacks shot by cops were themselves involved in shootings or robberies, the proliferation of cell phone and body camera footage that contradicts police versions of events brings the trustworthiness of those numbers into question. Many videos made public after the fact have illustrated that shootings initially described by police as being self-defensive were in fact extrajudicial executions of African Americans. Unquestionably, some shootings of black citizens result from actual crimes being committed. But the demonstrated fallibility of police accounts shows that in a disturbing number of cases, police officers “shoot first and come up with reasons later.” The Vice News investigation finds that a significant number of people (20 percent) shot by police were unarmed. Among those, 44 percent were African American.

“It is a complex picture, but what’s clear is that black people are more likely to be unarmed, and that more of these sort of low-level incidents escalate to shootings,” Samuel Sinyangwe, data analyst and co-founder of police reform organization Campaign Zero, told Vice.

America’s problems with gun violence across the board are reflected in its police shooting figures. A 2015 assessment found that 1 out of every 13 people killed by guns every year is killed by police. As the Washington Post notes, that’s roughly one killing “every 9 hours, or 2.5 shootings per day.” Undoubtedly, based on the number of unarmed victims, not every shooting is the result of justifiable safety fears by officers. But few cops are held accountable even for the most extreme mistakes in the field. An investigation by the Pittsburgh Tribune-Review last year found that between 1995 and 2015, “[f]ederal prosecutors declined to pursue civil rights allegations against law enforcement officers 96 percent of the time.” It’s notoriously difficult to secure a conviction against cops even in unequivocal cases of police abuse.

“There doesn’t have to be a gun involved. We see these cases where somebody has a cell phone or somebody makes the wrong move,” Bruce Franks Jr., a Missouri activist who went from Ferguson protester to state senator, told Vice. “There’s a million reasons they give so it ends up being justified.”

One of the few positive trends in the numbers Vice examined is a 20 percent downturn in police shootings since 2014, the result of Obama-era reforms in response to Department of Justice recommendations. Of the 10 cities that saw the largest drops in police shootings, seven complied with changes proposed by the federal government.

Cities that voluntarily adopted DOJ-recommended reforms saw a 32 percent decline in officer-involved shootings in the first year. The police departments that were forced to take on reforms through binding agreements with the DOJ saw a 25 percent decline that year, including Baltimore, whose agreement began this year. In Chicago, shootings by cops dropped by more than 50 percent after McDonald’s death, an incident that prompted a DOJ investigation and a package of recommended reforms.

That downturn is likely to end. Attorney General Jeff Sessions has characterized the DOJ’s work with local police departments as “federal intrusion,” and ordered a review of all reform agreements aimed at curbing civil rights violations and police abuses. "It is not the responsibility of the federal government to manage non-federal law enforcement agencies,” Sessions stated in a two-page memo issued earlier this year.

The Vice investigation of the country’s 50 largest police departments was met with some resistance by the forces being scrutinized. Just 47 departments ultimately responded to Vice's stats request with numbers that offered enough data for proper examination. “Many [law enforcement departments] fought hard to keep the information secret,” Vice claims, “and some responded to our requests only under threat of legal action.”

Despite dozens of high-profile police killings in recent years, the FBI still doesn’t mandate that local police departments around the country report to a centralized data-keeping mechanism. Just 35 of the 18,000 local police departments in the U.S. participate in the Police Data Initiative, an Obama administration program to increase transparency around policing that will likely also be diminished under the Trump administration and the Sessions DOJ. Yet, this is critical information about the state of justice and civil rights in this country.