Someone just made Trump's animatronic robot deliver his actual speeches

And, it's unsettlingly accurate 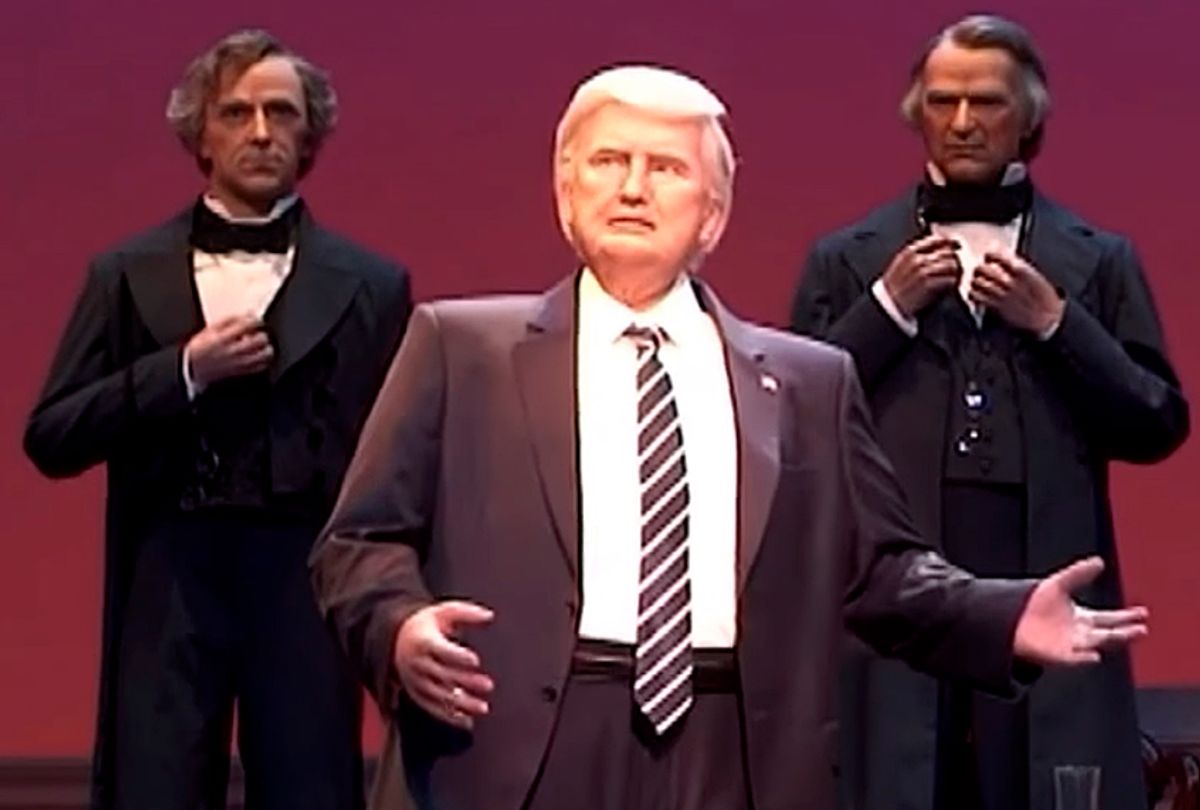 Tuesday, Walt Disney World unveiled its animatronic figure of President Donald Trump at the Hall of Presidents. His debut also includes a speaking role in the show, as is the case for all sitting presidents. Though its dialogue was recorded by the actual Trump, the Trumpbot offers a generic, safe speech about America's foundation that offers little insight into Trump the man or the commander in chief.

Perhaps sensing a gap to fill, Twitter user @DustinGiebel paired audio recordings of some of Trump's  more well-known with video of the honestly terrifying Trumpbot to create a new kind of horror.

For instace, Giebel created an edit where the automaton speaks the passage of the infamous Access Hollywood" tape where the future president brags about sexually assaulting women:

Hall of President Trump but with the Access Hollywood Tape audio. pic.twitter.com/WFDV0ncJMv

As well, we can watch the Trumpbot recreate the time when the actual flesh-and-blood Trump called Mexicans "rapists" on the campaign trail:

2: Hall of President Trump but with the Mexico are not sending their best comment pic.twitter.com/0bHxZAiULO

And, finally, we can see the mechanical version of the president recite the very important speech where actual Trump felt it necessary to clarify the size of his hands:

3. I’m still laughing at this one: Hall of Presidents Trump but debating with Rubio the size of his hands... and his uhh... pic.twitter.com/1GeHsMXxGs

Giebel's animatronic Trump just feels more unnervingly real the sanitized Disney version, particularly since the speech written for the Hall of Presidents display seems so downright sane. "From the beginning, America has been a nation defined by its people," the horrific mechanical golem says. "At our founding, it was the American people who rose up to defend our freedoms and win our independence. It was why our Founders began our great Constitution with three very simple words: We the people." Doesn't really sound like our guy, does it?

The Hall of Presidents attraction at Disney World opened in 1971 in the resort's first park, the Magic Kingdom. It's a multimedia presentation meant to highlight important chapters in U.S. history including the signing of the Constitution and the Civil War.

All 45 presidents are given the audio-animatronic treatment in the Hall, but just George Washington, Abraham Lincoln and the current sitting president give speeches — a tradition that goes back to 2009.