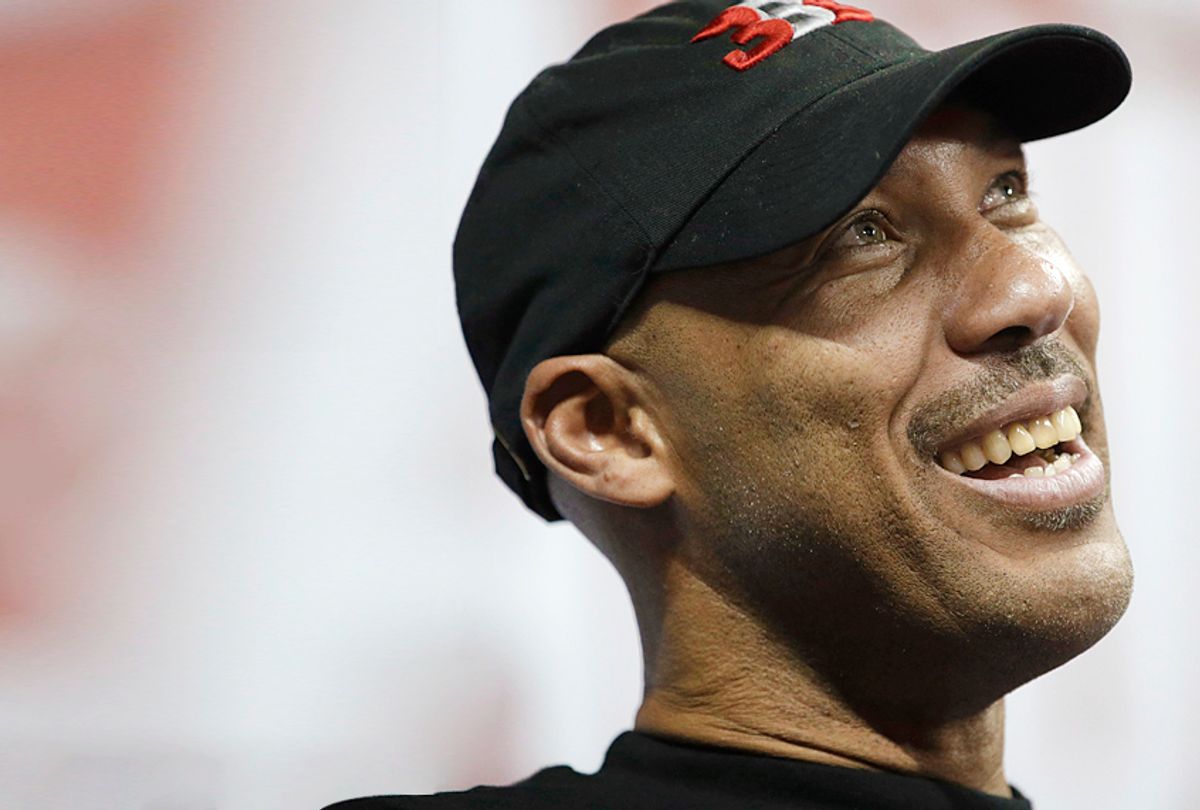 LaVar Ball, the number one "stage dad" of basketball, dropped one of the best ideas for sports that I’ve heard in the last 20 years, yesterday.

You may know Ball as the funniest father in sports — he’s been making headlines since his sons caught national attention for their athletic talent. Lavar’s oldest son Lonzo Ball, a point guard for the Los Angeles Lakers, was a lottery pick in the 2017 NBA draft.

On Wednesday, SLAM magazine reported that the founder of the Big Baller Brand (BBB) sneaker and apparel company announced that he will be launching the Junior Basketball Association, a league that will serve as an alternative to NCAA basketball programs by "cater[ing] to the top ranked high school basketball prospects in America."

The league will pay players up to $10,000 per month as they prepare for NBA careers. In a statement to SLAM, Ball makes it clear that he's created the league, which will target "nationally ranked high school seniors, whose main goal are to reach the NBA" as a direct alternative to the NCAA, including its one-and-done basketball rule, by allowing players to skip "the usual college pit stop" and go pro immediately after high school:

The JBA league is for basketball players who intend to pursue the sport professionally.

With the introduction of the JBA, allowing the NCAA to regulate and control the eligibility status of top basketball prospects will no longer be an issue.

There is no need to partake in an institution that claims its purpose is not to help you prepare for your professional career.

The recent statement from the President of the NCAA Mark Emmert when commenting on the recent withdrawal of LiAngelo Ball from UCLA sums it up:

“Is this a part of someone being part of your university as a student-athlete or is it about using college athletics to prepare yourself to be a pro? If it’s the latter, you shouldn’t be there in the first place.” -Mark Emmert

For decades, the NCAA has run a business that has exploited thousands of teens, while college institutions, coaches, media conglomerates, and corporate sponsors have all profited from the model.

The JBA is a long-awaited solution to this ongoing problem.

"Getting these players is going to be easy," Ball said in an ESPN interview. "This is giving guys a chance to get a jump start on their career, to be seen by pro scouts, and we're going to pay them, because someone has to pay these kids."

Some of Ball’s ideas over the last year didn’t necessarily play well to the public — like the $500 sneaker he released or the decision to pull his son out of college so he can focus on his pro career. But shouldn’t he be able to sell sneakers for whatever price he wants to sell them for? Isn’t this America? And why do his sons have to go to school now? There’s no age limit on college enrollment; however, the NBA is a young man’s game. If you have a shot at going, you should go.

The one year that the top players spend in college is practically worthless. The current system makes it almost impossible for them to get a good education, the kids already know that they are going pro, so many are just taking up space in the classroom. The NCAA is the only benefiting party, as the organization makes money off of the games, the TV deals and merchandise featuring star players' names and likenesses.

Ball’s idea is beyond brilliant, and maybe it will put some pressure on colleges to finally start paying their athletes so the NCAA can continue to compete for top talent. After all, a fraction of a popular college coach's salary, along with what some administrators earn, could help so many kids. Why not offer a scholarship to students and a check?