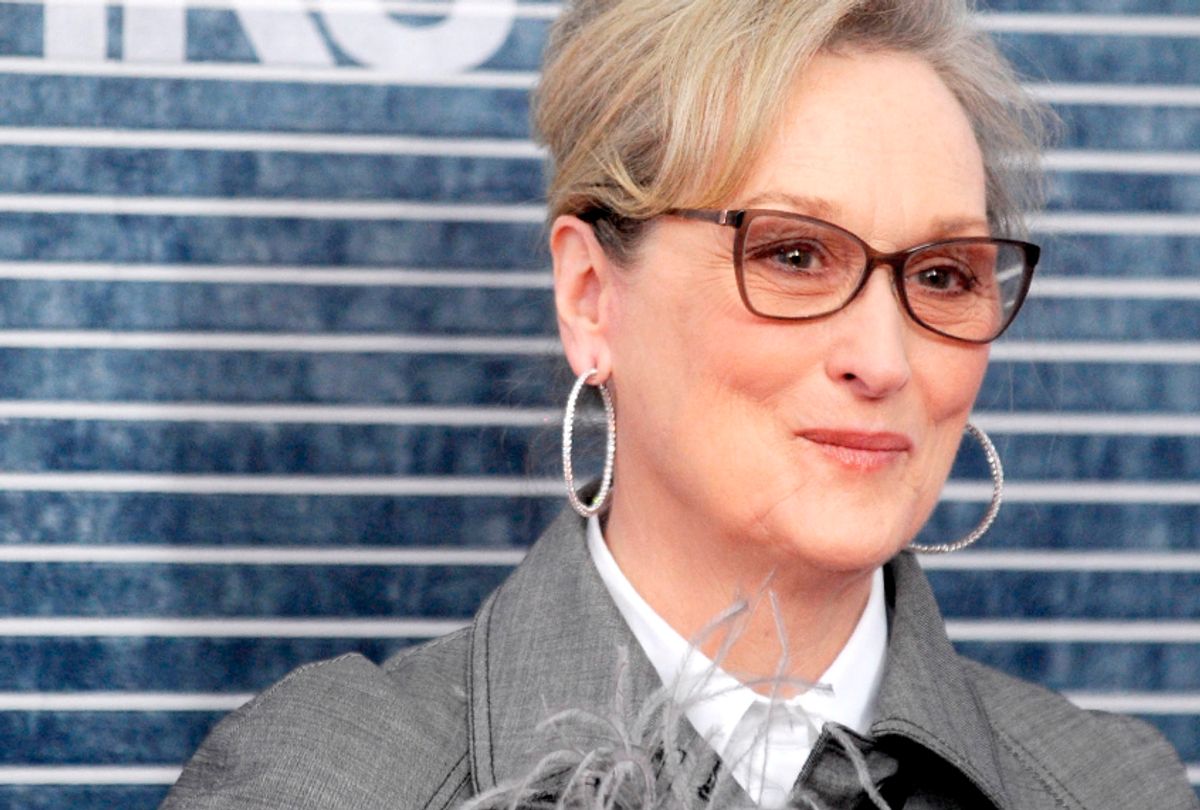 An individual purporting to be a guerilla artist has claimed responsibility for a series of posters seen plastered in public places in Los Angeles that declare actress Meryl Streep knew about Harvey Weinstein’s alleged history of sexual misconduct and did nothing about it.

The posters feature an edited photo of Streep and Weinstein with a red bar across Streep's eyes declaring, "she knew." Over the last week, they've appeared in various L.A. locations, including near Streep’s home and close to the 20th Century Fox movie lot. The movie company produced "The Post," Streep's forthcoming film about The Washington Post's publication of the "Pentagon Papers," one which many people are seeing as a commentary on President Donald Trump's combative handling of the press.

Tuesday, the Guardian published an interview with an individual claiming to be "Sabo," supposedly a 49-year-old ex-Marine and conservative street artist. There, Sabo claims responsibility for the posters and couldn't claim any particular knowledge establishing whether Streep was indeed aware of Weinstein's behavior.

"I wasn’t sitting in a room with her. I can’t say 100%," said Sabo to Guardian writer Rory Carroll. "But I’d say anyone in the (film) industry had a pretty good idea. I think she knew. Maybe she was providing Weinstein with the fresh meat," Sabo continued.

On a Twitter account that appears to belong to Sabo and his group of like-minded activist artists, Unsavory Agents, he self identifies as "The fastest censored street artist in the city of Los Angeles." There, he adds, "I am not a Left-WIng-Zombie-Artist. I am on the edge, the only true rebel artist in LA."

In the Guardian interview, Sabo claims these and other art projects targeting Streep are retaliation for the actor's previous criticisms of Donald Trump. "She’s swiping at us so we’re swiping back," he said.

The posters appeared shortly after Rose McGowan, an alleged victim of Weinstein, posted a tweet criticizing Streep, after it was revealed that some actresses intend to wear black to the ceremony for the 2018 Golden Globe Awards next month, in honor of sexual-assault victims in Hollywood.

"Actresses, like Meryl Streep, who happily worked for The Pig Monster, are wearing black @goldenglobes in a silent protest," she wrote. "YOUR SILENCE is THE problem. You’ll accept a fake award breathlessly & affect no real change. I despise your hypocrisy." McGowan has since deleted the tweet.

Though Sabo has also used his art, which he sells on his website, to criticize people like Al Franken, who resigned from the Senate following sexual-misconduct allegations, he said he has no reason to go after Trump, who has been accused of much the same things. Sabo says there’s no proof of Trump’s indiscretions (there is also no proof that Streep knew about Weinstein's alleged behavior).

"I don’t know a man who I’ve had a beer who doesn’t talk shit like that," Sabo said. "We don’t have proof of Trump doing it. Who am I to judge him on that?"

Other works by Sabo include images of Hollywood actresses standing next to Harvey Weinstein with the same red bar plastered across their eyes saying "She Blew." He also claims responsibility for a poster for "The Post," doctored with speech bubbles next to Streep and her co-star in that movie, Tom Hanks, saying "I knew" and "we all knew."