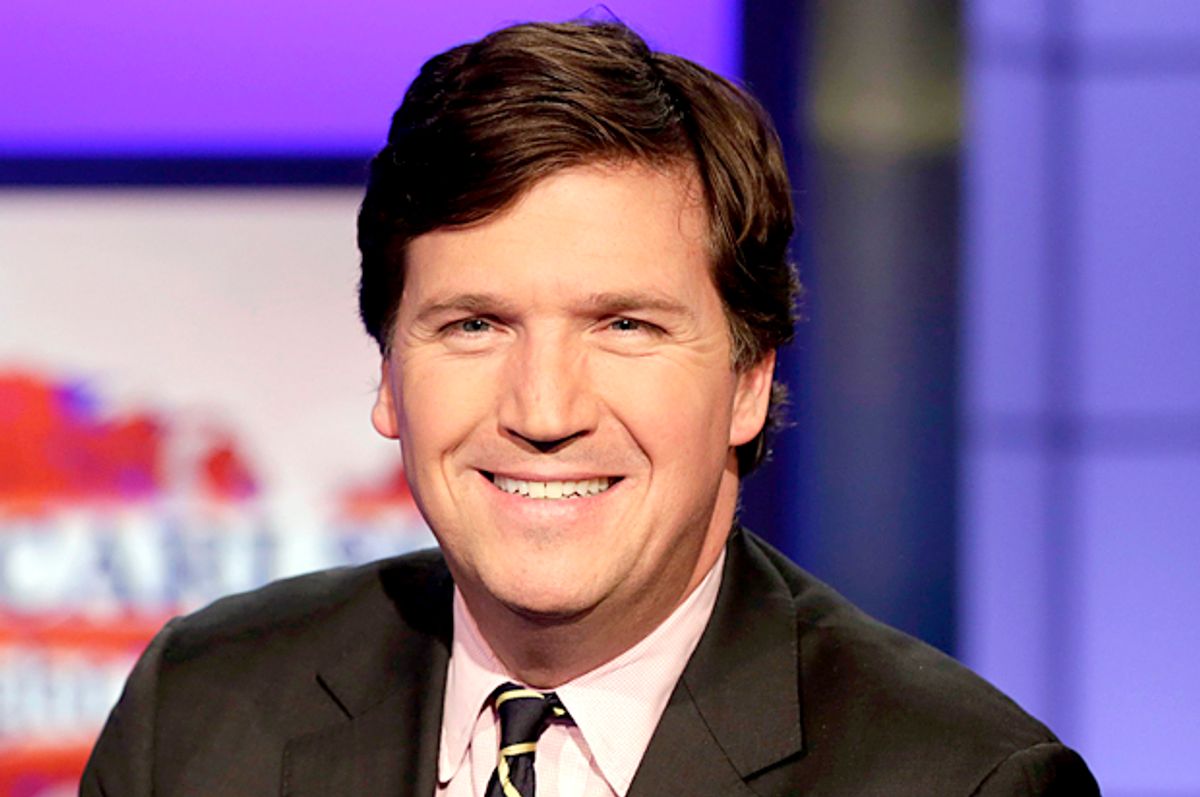 After claiming that Democrats attack voters "for the sin of . . . being white​,​ or male​,​ or privileged​,​ or heteronormative​,​ or whatever," Carlson went on to argue that the recent election outcomes in Virginia reveal a sinister plot to disempower regular voters by making it easier for large groups of racial minorities to vote.

Here's the transcript, via Media Matters:

Look at Virginia. It just happened there. The state's elected representatives decided long ago they didn't want the state's laws made by those who break them,​ so they deprived convicted felons of the right to vote.

Terry ​M​c​A​uliff​e​ knew it would benefit his party if felon​s​ could vote again, so he unilaterally restored those rights and attacked anyone who disagreed as​ a​ ​bigot. Remember that?​ Well currently, control of Virginia's House of Delegates hinges on a single race where the candidates literally tied with more than 23,000 votes cast.

In other words, McAuliffe's gambit worked, so why not try it on a national scale, with a group far larger than just convicted felons?

Democrats know if they keep up the flood of illegals into the country, they can eventually turn it into a flood of voters for them. They don't have to foster economic growth, or be capable administrators, or provide good government. They just have to keep the pump flowing, and power will be theirs.

It's not a conspiracy theory, it's happening in public. You can watch it happen. So, when Democrats howl about shutting down the government because they want total surrender on DACA, remember, this is the reason why. Their political success does not depend on good policies, but on demographic replacement, and they'll do anything to make sure it happens.

Like most right-wingers who engage in race-baiting, Carlson was careful to avoid explicitly stating that he was referring to racial minorities. Instead he talked about how Democratic Gov. Terry McAuliffe of Virginia "knew it would benefit his party if felon​s​ could vote again, so he unilaterally restored those rights and attacked anyone who disagreed as​ a​ ​bigot." Or he made statements arguing that Democrats "don't bother changing their minds. You change the voters themselves."

Carlson saved the bulk of his vitriol, however, for a debunked conspiracy theory popularized by none other than President Donald Trump himself — namely, that Democrats were getting undocumented immigrants to vote in important elections.

After denouncing how McAuliffe restored voting rights to 206,000 convicted felons, Carlson argued that Democrats want to try that method "with a group far larger than just convicted felons."

This line of reasoning is eerily similar to the arguments used by those who claim that white genocide is a real thing. White nationalists often oppose immigration from predominantly non-white countries on the grounds that the people who move to the United States from those nations will ultimately supplant white people in terms of political power. Even though there is no evidence whatsoever that undocumented immigrants vote on anything remotely resembling a large enough basis to influence election outcomes, white nationalists repeat this myth as a way of playing off of racist fears.

But Carlson's words have also echoed Iowa Rep. Steve King, who has been accused of harboring racist beliefs. King, a prominent Tea Party Republican, slammed diversity this month as "mixing cultures" and said he was a "champion for Western civilization."