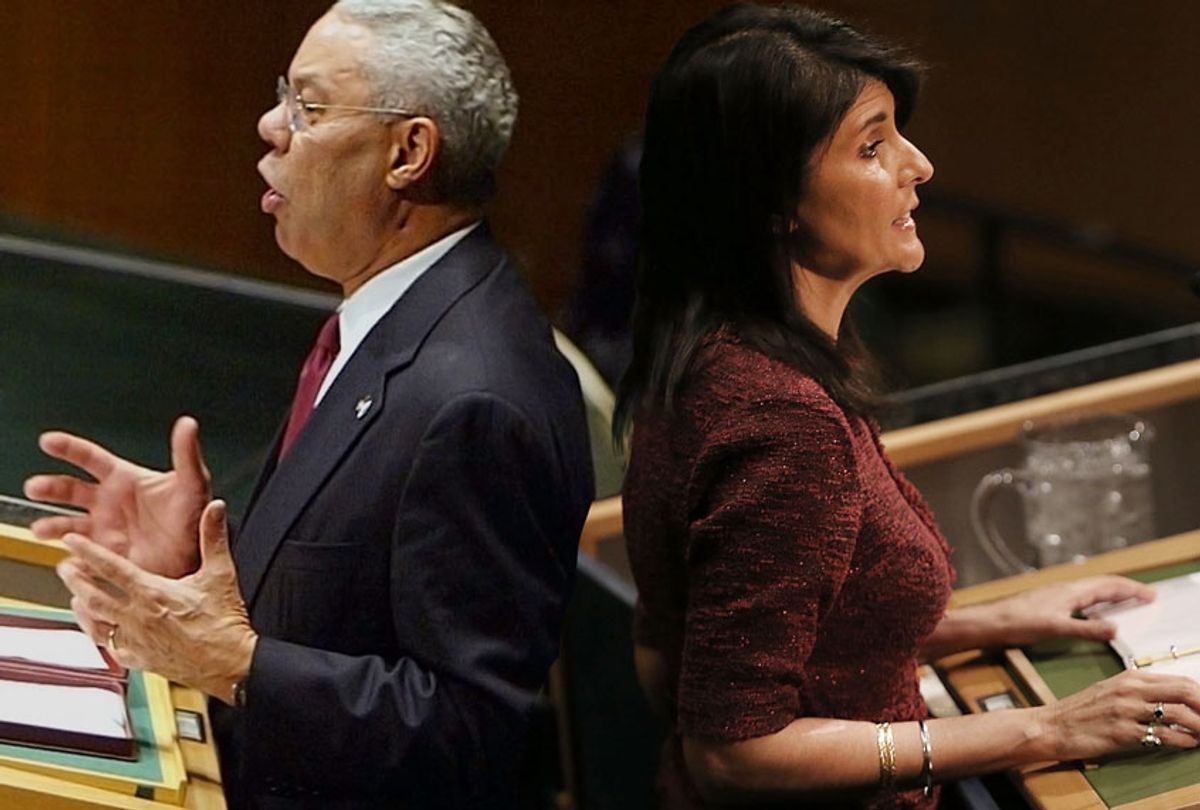 On Dec. 14, the American ambassador to the United Nations spoke in front of, what she claimed to be, fragments of an Iranian missile headed for an airport in the capital of Saudi Arabia fired by Houthi rebels in Yemen in November.

It was an ominous sight, filled with striking parallels reminiscent of Colin Powell's speech in the lead up to the U.S. invasion and occupation of Iraq.

Nikki Haley condemned "Iranian aggression" and "lawlessness" at the home of the Defense Intelligence Agency, while failing to utter a word about those most responsible for what has been deemed the world's largest humanitarian crisis in Yemen: the United States and the Saudi-led coalition.

"It's hypocrisy of the highest order," William D. Hartung, director of the Arms and Security Project at the Center for International Policy, told Salon. "And I think obscene, in this context, because the biggest humanitarian crisis in the world is in Yemen, and U.S. allies like Saudi Arabia and the UAE are primarily responsible."

The civil war in Yemen is in its third year, and more than 10,000 civilians have been killed so far. Millions of Yemenis continue down a spiral into famine, a calamity that has only been exacerbated as a result of the Saudi blockade. The nation has also seen the largest and fastest spreading cholera outbreak in human history. Since April, there have been more than 1 million suspected cases.

Hartung explained that the U.S. has "offered them [Saudi Arabia and allies] tens of billions of dollars in weapons, including some of the very bombs that have been used to kill the civilians, and to pretend that's not happening — and then to put on this dog and pony show about Iranian missile parts — I think is not only outrageous, but it kind of insults people's intelligence."

Standing before remnants of the missile, Haley asked listeners to imagine if the bomb had been headed towards New York City, Washington, London or elsewhere in the world. Haley warned that the U.S. had even further evidence to prove the missile was Iranian and that the country had violated U.N. Security Council Resolution 2231.

The U.N. has so far been skeptical of her claims, and U.N. Secretary-General António Guterres did not reach the same conclusion as Haley, in his report. While the missile resembled "the Qiam-1, an Iranian-made Scud variant," it also contained an "American component," and a panel of U.N. experts said it "has no evidence as to the identity of the broker or supplier" of the missile, Foreign Policy reported.

But the missile directed towards Riyadh, no matter the manufacturing origins, posed no direct threat to the U.S. and certainly doesn't come close to matching the barrage of bombs that have rained on Yemen since 2015. All the while, the U.S. has provided mid-air refueling for Saudi Arabian jets that have taken out schools, hospitals, factories, funerals and weddings.

Haley's rhetoric was dangerous and fit the broader theme of the Trump administration to take a harder line against Iran.

"The balance is so absurd between what Iran may have done and what the United States and the Saudis are, in fact, doing, that I was maybe a little surprised they thought they could get away with it," Hartung said.

President Donald Trump has provoked Iran repeatedly since taking office and has vowed to scrap the Iran nuclear deal. Haley used the little evidence she had to point the finger at and stoke tensions with Iran, as the Trump administration rapidly approaches two mid-January deadlines about the certification of the Iran deal.

"It seemed pretty transparently to be kind of a political ploy for domestic consumption," Hartung explained. He added that Haley's speech was geared "to make Iran seem like a bigger threat, to try to undermine the nuclear deal."

Her grandstanding left many, including Iran's foreign minister, drawing parallels between her speech and that of Colin Powell, who used misleading and faulty intelligence before the American invasion of Iraq.

"Intelligence is, of course, supposed to be used to make a decision," Kate Gould, the Legislative Director for Middle East Policy at the Friends Committee on National Legislation told Salon. "Not to market political propaganda, and that's what we're seeing on display here."

Gould added that Haley's "theatrics" were clearly used to "sensationalize and just stoke Iranian sentiment in the United States."

"We saw a speech that was clearly about laying the groundwork for the Trump administration's escalation against Iran," she explained. "The parallels between Nikki Haley's theatrics at the DIA and Colin Powell's speech are really striking, and the hypocrisy is breathtaking given that the United States is sending so many weapons to Saudi Arabia."

Recently, the Trump administration has surprisingly expressed interest in seeing a political solution in Yemen but has still made no mention of halting support for the Saudi-led air campaign. Both Hartung and Gould explained that a political solution is not possible in Yemen without the U.S. first taking those steps, but they agreed that there could be internal conflict within the administration to take action.

"I think some of the administration realizes that this humanitarian disaster in Yemen is not only bad for the people of Yemen but is a stain on the reputation of the United States," Hartung told Salon.

The primary question, Hartung said, was whether "Trump had a true change of heart on this, and if so, how long would it last?"

Hartung added, however, there still needs to be much more "concrete action."

But the U.S. doesn't appear to have a longterm strategy in Yemen, and neither does Saudi Arabia. The aggression, Operation Decisive Storm, has been led by Saudi Crown Prince Mohammed bin Salman, who Trump has praised despite Salman's recent power grabs.

"These people who are starving to death and watching their children, their family members and their neighbors starve to death," Gould explained, "they will not forget what the U.S. role is in this."