“Jumanji: Welcome to the Jungle” is a nostalgia-baiting film done right

There have been way too many nostalgia-based movies recently, but “Jumanji: Welcome to the Jungle” sets a standard 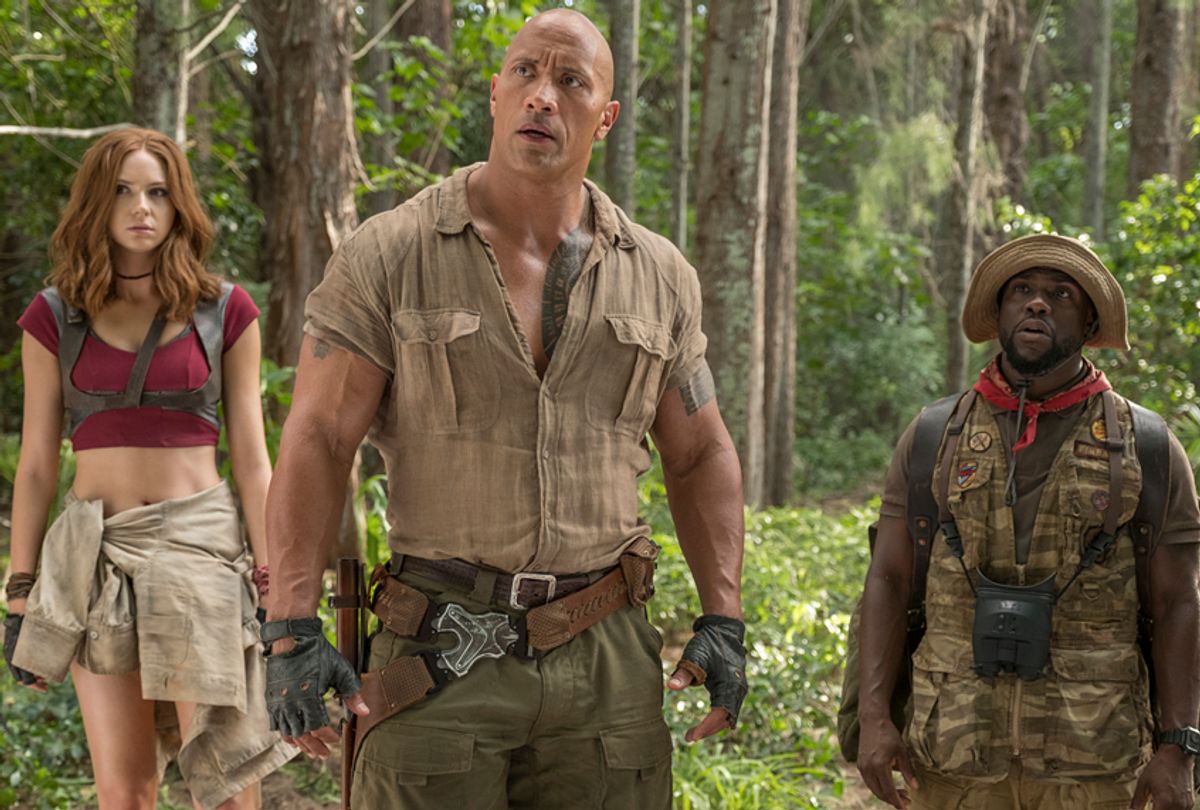 I’m not sure anyone was clamoring for a sequel to “Jumanji,” the 1995 cult classic about a haunted board game starring Robin Williams. Then again, “Jumanji” is a movie that seems to stick in the brains of people who were raised in the 1990s, and from a studio’s perspective that probably is enough. Given the success of other movies that have remade or softly rebooted more popular 1990s fare — “Jurassic World” and “Beauty and the Beast” come across as the most lucrative recent examples of these — it made perfect sense that Sony would take a shot in the dark with a “Jumanji” soft reboot.

The fortunate news is that “Jumanji: Welcome to the Jungle” is a very good movie — surprisingly so, in fact. To understand why, though, it helps to make sense of what has allowed other nostalgia-infused films from times gone by to also succeed.

The thing about nostalgia is that, while it’s practically become a cliché to complain about it, our culture has pretty much always been suffused with nostalgia-baiting. Every decade seems to have a number of pop culture properties — movies, TV shows, books, you name it — that either directly continue stories that had been popular when members of the prevailing generation were still children or directly reference them. As one example, in the late 1970s and 1980s we saw movies that deliberately referenced the adventure movie serials from the 1930s and 1940s — the “Star Wars” and “Indiana Jones” franchises. This was because the pioneers behind those two franchises, Steven Spielberg and George Lucas, had a great love for those old movies and knew that many of their peers felt the same way.

Of course, “Star Wars” and “Indiana Jones” still told original stories. During that same period, however, Richard Donner released the first two “Superman” movies. Given that this was before the superhero film boom kicked off by “X-Men” in 2000, it’s hard to explain the popularity of the “Superman” movies as being attributable simply to the fact that he was a popular superhero. Yet as historians like David Welky have pointed out, the character of Superman had been embedded in the American collective consciousness as an icon since the 1930s. He continued to pop up in TV shows and comic books in subsequent decades, and it was this nostalgia for a beloved icon — as well as the quality of Donner’s two films — that made them so successful.

Don't think that this trend was limited to the late 20th/early 21st century. Even beloved classics from the days of yore were frequently little more than nostalgia-baiting. When hit films of the 1930s were released, like "Tom Sawyer" (1930) and "The Wizard of Oz" (1939), they were referencing literature that those audiences had grown up with as children — "The Adventures of Tom Sawyer" (1876) and "The Wizard of Oz" (1900). Indeed, the 1939 "Wizard of Oz" wasn't even the first "Wizard of Oz" film to be released; that distinction belonged to a forgotten silent movie from 1925.

In short, nostalgia-baiting has been around since we've had movies, although thankfully it is mostly the good ones that get remembered. Our era seems to have been one that produced more bad than good remakes, as indicated by the mediocre "Goosebumps" (2015), the derivative "Jurassic World" (2015), the wretched "Pixels" (2015) and the lame "Baywatch" (2017). While I thought "It" was an instant classic and "Star Wars: The Force Awakens" was a decent soft reboot (albeit basically a retread of the 1977 "Star Wars" movie), those have been the exceptions rather than the rule. These days, filmmakers seem content with the notion that simply referencing beloved properties from the past is enough to make a good movie — or, at least, to make money off of that movie. Actually presenting audiences with a well-told story is a secondary consideration, if that.

By contrast, “Jumanji: Welcome to the Jungle” succeeds because it knows how to reference both the original film and its time period without doing so in a slavish fashion. There are references to the original movie — we see the original board game in the beginning and how it was transformed into a video game, as well as have a brief reference to Robin Williams’ character in the second act — but not so many that it feels like the movie is cramming them in for their own sake. Similarly, there are quite a few effective references to the 1990s, from how one character’s knowledge of video games from that period helps the protagonists in their adventure to how another character — one who was directly transported to the Jumanji video game from 1996 — uses humorously out-of-date slang and pop culture references of his own.

At the same time, as other critics have pointed out, “Jumanji: Welcome to the Jungle” works because it has relatable and well-developed characters, charismatic actors to play them and a story that works pretty damn well as an entertaining diversion. Perhaps most importantly, it speaks to real issues that impact the children and teenagers who will hopefully comprise its main audience, giving it a resonance that more cynical nostalgia-baiting films simply lack. Not coincidentally, these were the same qualities that worked in the original “Jumanji” movie, thereby making “Jumanji: Welcome to the Jungle” a particularly fitting homage to that film.

Although it may not make as much money as other nostalgia-infused soft reboots like “Star Wars: The Force Awakens” and “Jurassic World” — the theater I attended had a sparse audience, although they audibly loved what they saw on the screen — “Jumanji: Welcome to the Jungle” very much deserves to be categorized with them (and above “Jurassic World,” which I personally thought was overrated). It strikes the balance between referencing its nostalgic origins without being obnoxious or obsequious in doing so. Let’s hope these are the kinds of flicks we’ll continue to see in our current phase of swimming in our own nostalgia.