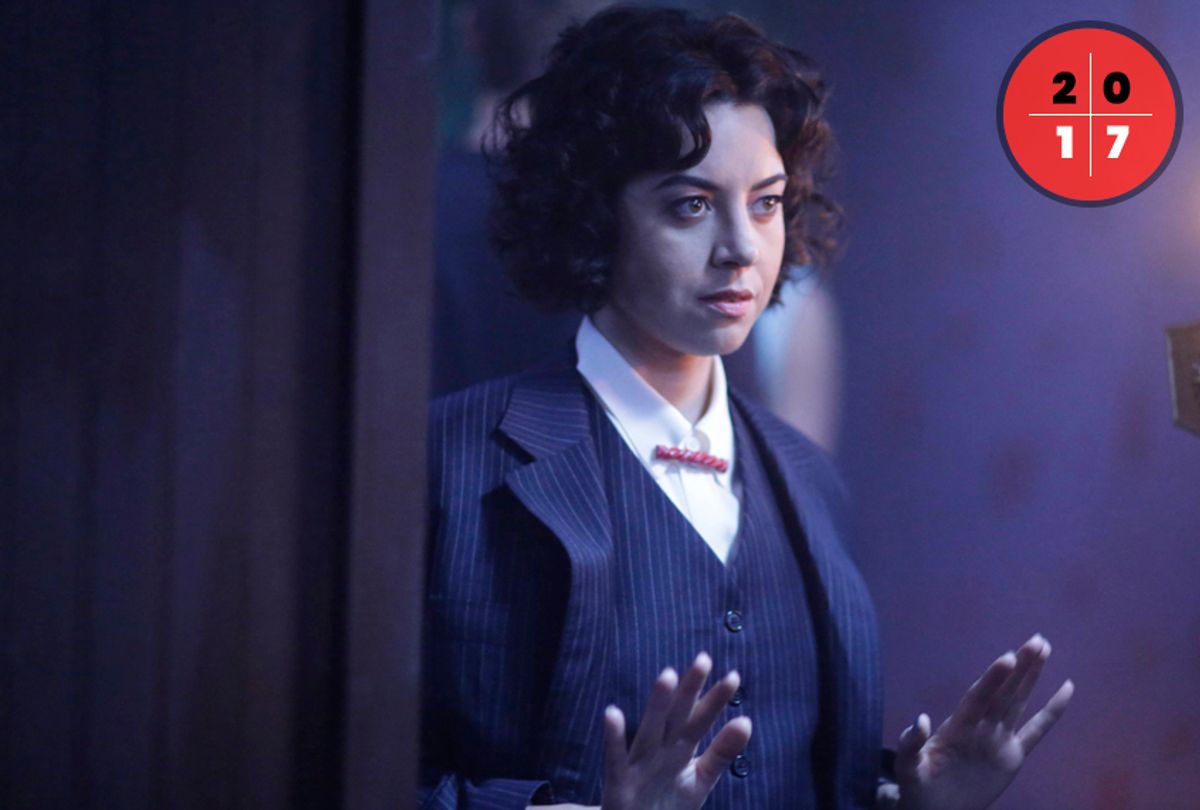 You don’t need another “best performances of 2017” list, do you? At this point readers can predict who would have a place in the ranks. Emmy rubber-stamped the notion that Sterling K. Brown had a tremendous year, as did Issa Rae, Elisabeth Moss and Maggie Gyllenhaal. Sure, a few of the usual suspects are on this list, including Carrie Coon and Aubrey Plaza.

What interests me more are the TV performances that say something about who we were in 2017 and where the year has brought us. That’s why this list includes scripted portrayals as well as a tip of the hat to TV performances in the realm of news and late night. In their own unique ways these individual efforts on the small screen spoke to us -- and for many of us, helped us to make sense of a challenging year or, if not that, at least to make it through with some of our sanity and humor intact.

10. Anthony Atamanuik as Donald J. Trump in “The President Show.” Alec Baldwin bathes in praise for his inflated, ridiculous interpretation of Trump as a petty fool on “Saturday Night Live,” but Atamanuik’s impersonation is at times so close to the real thing that it’s unnerving. He also allows the viewer catharsis, owing to “The President Show” writers’ frequent emphasis on Trump’s similarities to a petulant toddler, positing that beneath the bluster and massive ego hides a scared child with cripplingly low self-esteem. By now we know there’s no way to shame this devil, but in his capacity as a living effigy, Atamanuik offers a kind of relief by highlighting just how small the leader of the free world actually is. And for the 30 minutes that his show is on we can feel a little less anxious about the way the world is going.

9. Jimmy Kimmel as the host of “Jimmy Kimmel Live!” Before 2017 Kimmel wasn’t a frequent flyer in the headline-maker category among late night hosts. That honor tended to go to Jon Stewart and Stephen Colbert in the aughts, accompanied the odd David Letterman dig in his later years. That was before the president and a Republican Congress went after the Affordable Care Act, before Kimmel witnessed first-hand the anxiety that less-fortunate parents of children with health problems go through, and before Louisiana Senator Bill Cassidy attached Kimmel’s name to the debate.

This was a mistake. Cassidy proclaimed that he’d only vote for a bill that passed “The Jimmy Kimmel Test" — that pre-existing conditions would be covered and life-saving provisions of the ACA would be maintained. When the bill did not pass said test and Cassidy backed it anyway, Kimmel declared open season on the political establishment’s naked hypocrisy.

In less uncertain times Kimmel has treated politics as something to be openly mocked and dismissed, and that has made his recent calls to action particularly potent. Because if that reasonable, regular-guy celebrity is fed up enough to use his late-night network platform to go after the crooks in Washington, then the situation must really be dire. But at least he’s speaking up where other hosts (ahem, Jimmy Fallon) have remained silent.

8. Jimmy Tatro as Dylan Maxwell in “American Vandal.” Entertainment has a habit of rewarding stupidity with reality shows. Witness the staying power of “Jersey Shore” and other MTV series or the 15 minutes of fame granted the likes of, say, the Octomom.

Less common is a sympathetic view of who that stupid person actually is as opposed to what the stupid person does. The adolescent documentarians in Netflix’s mockumentary don’t intentionally try to get us to empathize with Dylan, their school’s resident chucklehead. But as they dig into the case that led to Dylan’s suspension for drawing dicks on faculty cars in spite of his professed innocence, the audience comes to feel something for Tatro’s simple, slack-jawed Dylan despite the fact that he’s willfully irritating, provocative and disrespectful.

If Tatro weren’t so skilled in winning us over, we’d call him a troll. And if we weren’t so inundated with trolls perhaps we not be so readily accepting of the first-season denouement, an outcome that validates and vindicates in one sweep.

7. Betty Gilpin as Debbie Eagan in “GLOW.” Liberty Belle, Debbie’s wrestling persona, is Reagan-era jingoism made flesh, a comic-book character brought to life. Pitting her against Zoya the Destroya, the Cold War Russian villain portrayed by Debbie’s ex-best friend Ruth is an act of genius on the part of the wrestling outfit’s creator Sam Sylvia. The wrestling is fake, but the rivalry behind it is real and residual chemistry these women share, and together, those qualities make their performance in the ring unbeatable.

But there’s a tragedy in the way Gilpin can make her expression flush with rage, frustration and sorrow that goes straight to the heart of any woman and yanks at it. It’s there even when she’s at her brattiest, and it really shines through when she’s fighting. The partnership between Liberty and Zoya works because the collaboration between Gilpin and Alison Brie, who plays Ruth, looks fierce and strong — an alliance of opposites, in many ways reflecting recently revitalized awareness of the need for political unity among women in general. It also stands in contrast to the reality that widespread sisterhood is still a pipe dream, since most white women continue to vote against the political interests of their gender. Then again, if Debbie and Ruth can put their anger at each other aside to deliver the goods when it counts, why can’t the rest of us?

6. Rachel Brosnahan as Miriam 'Midge' Maisel in “The Marvelous Mrs. Maisel.” What would be possible if women didn’t have to contort ourselves to work with, around and in spite of sexism? Midge Maisel explores that question as she defies the expectations of her parents (her father in particular) and the selfishness of a cheating husband to go after a career that she truly loves and one virtually nonexistent for women in 1958: stand-up comedy.

Series showrunner Amy Sherman-Palladino could not have known that her Amazon series would premiere weeks after #MeToo felled Louis C.K. and only shortly before another male comedian, T.J. Miller, would be made to answer allegations of sexual assault. Those stories opened the door to conversations about the rampant misogyny in the comedy world, closing doors of opportunity to women who refuse to put themselves in proximity to predators with zero oversight but who often hold the keys to the kingdom, or are offered copies.

Brosnahan’s Midge doesn’t face such blatant ugliness in the opening episodes of the series. Rather, the performer’s insistent spirit, lending her character a biting wit and optimism laced with sarcasm (often marinated in wine), recalls Joan Rivers in her heyday.

5. DeWanda Wise as Nola Darling in “She’s Gotta Have It.” Spike Lee’s 1986 breakthrough film is primarily remembered for what it did for his career, rather than Tracy Camilla Johns’ original rendition of Nola Darling. Johns' Nola represented Lee’s interpretation of a sexually liberated woman of her time. Wise nails the  vivacious nature of Nola in the now. Her sensualist, a twenty-something Brooklyn artist, embodies the wonder and doubt of youthful adulthood in the modern age, appearing confident in one moment, flaky and self-involved in the next. In the turn of a street corner, her warmth and vulnerability toward a down-and-out neighbor washes away the sins of a prior moment that makes us question her. Through it all she remains aware of the changes in progress around her: the gentrification of her neighborhood, the waning patience with her free-spirited antics, and the rising tide of economic anxiety.

4. Carrie Coon as Nora Durst in “The Leftovers.” Okay, rhapsodizing about Coon in 2017 appears to be the thing to do right now, but if we’re talking about oh-so-2017 performances it would be criminal to omit the way she externalized Nora Durst’s spiritual journey in HBO’s underappreciated existential gem. Coon captured Nora’s frantic push-and-pull between hope and carelessness, acceptance and effort, blind trust and despair with an assured grace. But as we close out this impressively taxing year, the image emblazoned in my mind is the river of water flowing from Nora’s closed eyes — not from tears, but the sprinkler system in the Melbourne hotel room she and her soulmate Kevin set ablaze in anger and frustration. The character may have been actually crying but Coon’s feather-heavy performance left us with the sense that like many of us, by that point she was pretty much all cried out.

3. Jake Tapper as a CNN anchor and host of “The Lead with Jake Tapper.” Tapper’s presence on this list doesn’t mean we believe he’s an “actor” perpetuating so-called “fake news.” Rather, it’s a respectful acknowledgement of the stamina it takes to work in 24-hour cable news, a fast-paced medium accelerated with the nitro injection of Donald Trump’s ignorant unpredictability. And Tapper has met the nonsense and various disinformation campaigns head on, speaking truth to power in a post-truth world with unblinking commitment and an even-keeled confidence.

From his marathon sparring session with double-speak specialist Kellyanne Conway in February to his recent and epic silencing of one of Roy Moore’s more idiotic surrogates, Tapper’s swaggering fearlessness in the face of bullshit peddlers has been a bright spot in a gloomy, doom-filled year.

2. Aubrey Plaza as Lenny in “Legion.” Plaza crystallized a deadpan comedy style on “Parks & Recreation,” which made her performance as Lenny Busker a transfixing shock. Lenny begins the season as the best friend of “Legion” protagonist David Haller. By its close she’s evolved into something altogether different. Several things, truly. The nature of who or what Lenny is keeps changing through the season until an important reveal in the sixth episode, and by then Plaza has incorporated several distinctly terrifying moods and masks into a single role. From week to week the viewer could never be sure what they’d be getting with Lenny Busker, echoing the erratic, sharply surreal mood swings of day-to-day living in 2017.

1. Ted Danson as Michael in “The Good Place.” Danson’s trademark lovable, “aw shucksy” demeanor serves him well in the show’s grand reveal at the end of season 1. All it took was a smile for his character to transform from a bumbling, seemingly benevolent cosmic architect into a devious agent of evil whose entire raison d’etre is to make the afterlife as crappy as possible, in as many unexpected ways as possible, for all eternity.

Danson’s Michael might as well be 2017 in a suit. And he’s plainly having a blast playing an uncaring agent of malice cloaked in a summer-weight suit. But that’s not a bad thing, since the comedy’s current chapter involves Michael joining his charges in a quest to actually and legitimately become a better being. Maybe fate will follow his lead in 2018, because this stint in the Bad Place is wearing us out.