The biggest labor stories of 2017

The attacks from above and the fight from below 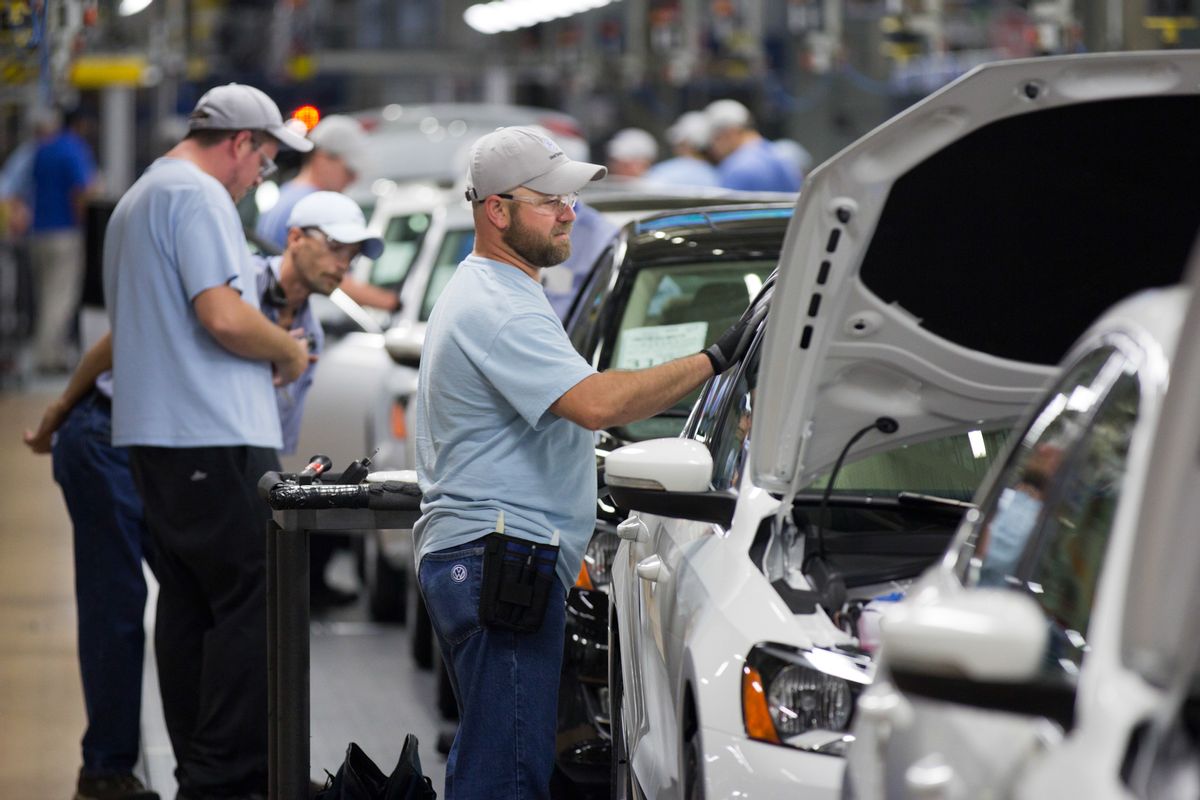 The first year of any Republican presidential administration is sure to bring new attacks on unions and their allies. This year has seen plenty of anti-labor offensives, as well as inspiring fights and encouraging signs for the future.

Let’s start with the most over-blown “fake news” labor story of 2017: the asinine notion that Donald Trump has a cunning plan to cleave white working-class voters away from the Democratic party by protecting American jobs and giving unions a fair shake. From the coalmines of West Virginia to the Carrier plant of Indiana, Trump’s claims of saving jobs have been spectacles of hucksterism that resulted in fewer good jobs.

His invitation of building-trades leaders to the White House in his first week on the job—once seen as a canny exploitation of union leaders’ simmering resentment towards Democratic party indifference—is now understood as the gesture of a clueless buffoon struggling vainly to treat his new job like his business ventures. “Let’s bring in a few dealmakers and talk about construction projects,” he probably thought. “Maybe they have some good suggestions for how my idiot son-in-law might go about bargaining for peace in the Middle East.”

Meanwhile, his Department of Labor and  National Labor Relations Board (NLRB) appointments, and the speed with which they are reversing any gains that workers made under the Obama administration, are all bog-standard right-wing moves. The official labor policies of the Trump administration are exactly the same as would have been Jeb Bush’s or Mitt Romney’s.

But workers refuse to wait until Trump is impeached, voted out or felled by his nauseatingly unhealthy diet. The year was marked by some impressive organizing campaigns that offer hope for the future.

Beating Trump in the rebel cities

Some of the most strategic organizing of this Trump moment has been focused on winning real gains for workers where we can: in our rebel cities and blue states. Alt-labor organizations have been leading this fight.

The Fair Workweek Initiative has been fighting the mostly non-union retail, fast-food and other minimum wage service industries that have kept their employees virtually on-call through abysmal short-staffing policies. From New York City to the entire state of Oregon, workers won new laws in 2017 that force employers to post work schedules at least one week in advance, pay workers surcharges for last-minute changes and abolish the prevalent practice of scheduling workers for “clopens” (working a first shift the morning after closing up).

The New York City fair scheduling ordinance was part of a comprehensive labor law passed by the city council in May. One part that will be watched closely by union allies and haters alike is a requirement that fast-food establishments create a mechanism to allow employees to make voluntary contributions from their paychecks to a qualified nonprofit to provide services and advocacy on their behalf.

This is dues check-off for Fight for $15, and that is amazing.

One of the biggest challenges for alt-labor is funding the work. Collecting voluntary membership dues from more than a few hundred of your most hardcore supporters is a massive challenge if you don’t have access to payroll deductions. Without those deductions, a union or workers center is relying on auto-renewing credit card contributions or Automated Clearing House direct deposit arrangements with members’ checking accounts.

Speaking from experience, even teachers bounce checks and miss credit card payments with distressing regularity in our new age of inequality.

If New York City’s voluntary-for-workers-but-legally-mandated-for-employers dues check-off system helps Fight for $15 find a sustainable funding stream, it will be a model for other rebel cities and eventually for federal legislation.

Also of note is the return of the big May 1 “Day Without Immigrants” protests that first rocked the country in 2006, this time as an obvious rebuke to our racist president. Not nearly enough attention was paid to the fact that in the midst of the May Day actions, immigrant workers and small business owners shut down the small city of Reading, Pa. in a general strike. The action was organized by Make the Road PA. In the endless organizing debates about the value of going wider vs. deeper with community organizing, Make the Road’s impressive action is a powerful example of what can be done with scant resources but long-term commitments in working-class communities.

The Empire strikes back

In July, the Trump administration officially abandoned Obama’s effort to double the minimum pay that salaried employees should legally be paid. That effort was spear-headed by Tom Perez, the most dogged Labor Secretary we’ve seen in half a century. It aimed to raise the wage of overworked employees classified as “professionals” and “supervisors” by corporations seeking to avoid paying overtime to the still-insufficient sum of $47,476. Many corporations—Walmart most prominently—raised their middle ranks’ pay in anticipation of the new rule. Fortunately, few companies have rescinded those raises now that they are no longer legally obligated to pay (probably out of fear of mass resignations and lawsuits).

Two months after this effort was ditched, the Supreme Court agreed to hear a lazy remake of a bad sequel of an attempt to force public sector unions to go “right-to-work” that had seemingly died along with Antonin Scalia. The new case, Janus vs. AFSCME, is wrong on facts and legal precedent. But it has the benefit of a stolen Supreme Court seat—and the blessing of the U.S. government, which has filed an amicus brief against the very concept of a strong labor movement.

More recently, the right-wing hack who Trump appointed to befoul the former office of Tom Perez declared his intent to restrict and over-regulate workers centers as if they were statutorily-recognized unions. This is an attempt to silence these shoestring budget organizations by making their boycott activities punishable by crippling multi-million dollar fines. As Sharon Block writes, it’s a back-handed compliment that corporate interests see these alt-labor groups as a threat to their agenda. It also shows why we need a new Labor’s Bill of Rights.

New hope in the private sector

Workers in the private sector continue to organize. Even where there are notable successes, there are also challenges related to how badly any Republican president can damage the legal paths to justice for workers.

Responding to tumultuous changes in their industry, journalists and other content producers for major media companies have been organizing at a rapid-fire pace. Journalists at Salon, The Intercept, Thrillist and Vox, video writers at Vice, and editorial producers at MTV News all organized with the Writers Guild of America East this year. Meanwhile, the reporters at the Los Angeles Times—long a bastion of anti-unionism—organized with the News Guild.

But, in a move that threatened to chill this organizing heat wave, billionaire Joe Ricketts abruptly shut down his Gothamist and DNAinfo news networks days after workers prevailed in an NLRB election. This move is perhaps the starkest example of how our labor-relations system is broken beyond repair — and why new models of worker representation are needed.

In higher education, following a frustratingly late-in-term Obama NLRB decision to restore the right of graduate employees to organize, graduate workers have begun to do so in great numbers. Graduate employees at American University, Brandeis, the University of Chicago and beyond have joined the ranks of adjuncts and other contingent faculty who organized with a crowded and competitive field of unions who seek to represent them.

There are varying degrees of resistance. Rare is the college that doesn’t at least put up a fancy F.A.Q. that bemoans the potential “diminishment of the collegial relationship between some students and their mentors.” But some universities — led by the Ivy Leagues — are refusing to bargain with certified unions or cooperate with the NLRB at all. They’re dragging out the clock, waiting for Trump’s board to overturn Obama’s precedent and strip grads of their organizing rights all over again.

To be clear, that means that the Ivy League universities—which tout themselves as bulwarks of liberal democracy — are appealing to an increasingly authoritarian Trump administration to rule that their employees have no rights.

Finally, as a part of their “Better Deal,” Senate Democrats introduced a comprehensive reform bill to reshape the National Labor Relations Act. It would ban “right to work,” restore workers’ right to engage in solidarity activism, expand the act to cover public sector workers and “independent contractors,” streamline union certification procedures and create financial penalties to bosses who willfully break the law.

It’s exactly the bill we needed Jimmy Carter to sign into law in 1978.

I don’t mean to be churlish. These reforms would surely be helpful in restoring workers’ rights. But they also wouldn’t go far enough towards expanding the membership and political reach of unions in all states and all sectors of the economy as rapidly as we need if we’re going to stop the creeping spread of fascism.

For that, we need “all-in” systems of labor rights like just cause and sectoral labor standards. These ideas are being discussed in Washington. I’ve been in some of the conversations. Repealing Taft-Hartley, as the “Better Deal” would essentially do, is – amazingly - the centrist compromise within the Democratic establishment right now. Bigger and bolder reform ideas are possible!

There are two key dynamics at play. First, while the Republicans’ control Congress, any Democratic bill is a dead letter. This actually makes the next year an ideal time to float radical trial balloons, which, if they gain any traction could remain a part of the agenda in 2021. Second, the race for the Democratic presidential nomination is quickly shaping up into a race to the left, and most potential candidates want to make their mark on workers’ issues.

These political dynamics, plus continued on-the-ground organizing, are reasons for optimism in 2018.

In These Times Labor Rights Unionization