The case for a “green death” 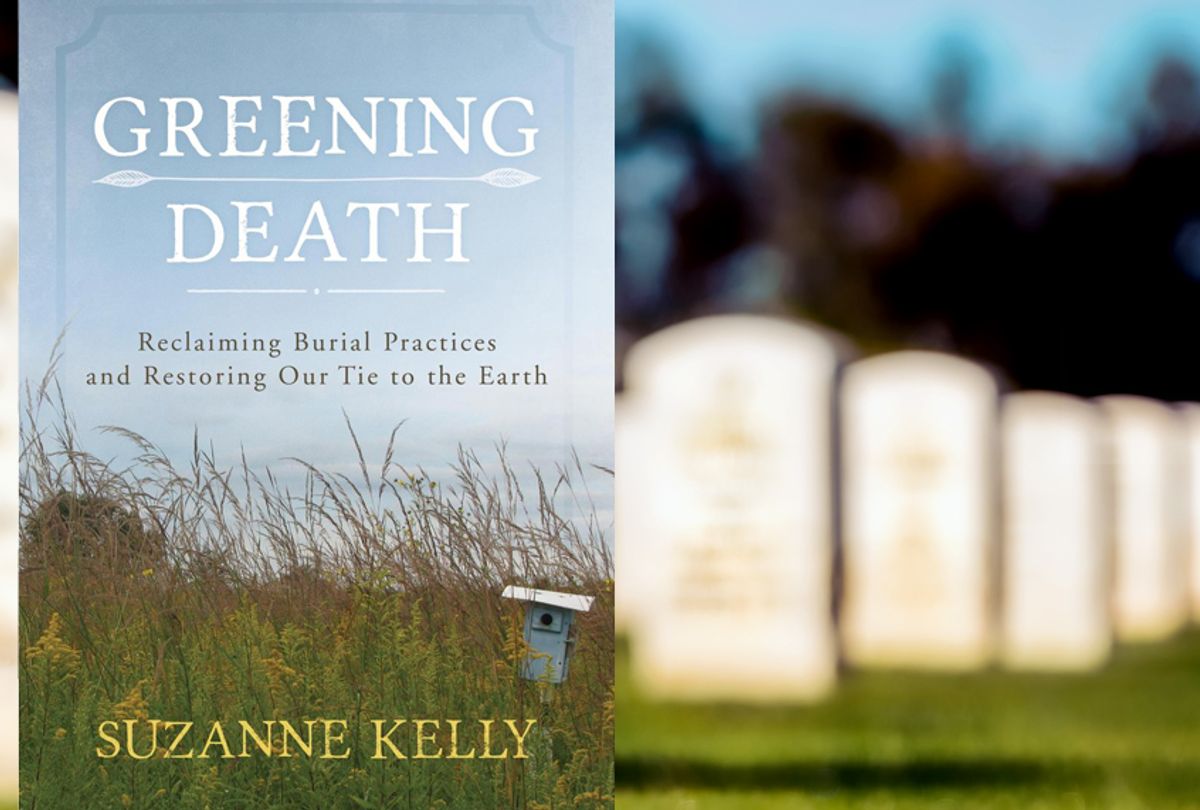 Excerpted from “Greening Death: Reclaiming Burial Practices and Restoring Our Tie to the Earth,” By Suzanne Kelly, out in paperback December 22, 2017. Published by Rowman & Littlefield Publishers. Reprinted with permission.

Grief can take hold of us in many ways. It can masquerade as depression or a sense of personal failure. It can bring us closer or farther away from those we love. It can leave us feeling deserted or saved, in service or in need. But where exactly grief will take us is anyone’s guess.

I was thirty, working on my PhD, and preparing for some future life of the mind when my father suffered a massive and fatal heart attack at sixty-two. For some time afterward, I felt wedged between the interests of life and death. But like so many others, the invisible rope tying me to the land of the dead would eventually begin to slacken, just as life’s grasp would begin to strengthen. When I finally journeyed back from that liminal place I realized that far from leaving me stranded, grief had actually anchored me back to life with fresh perspective. Indeed, Proust may have been right, that “ideas come to us as the substitutes of griefs, and griefs, at the moment when they change into ideas, lose some power to injure our heart.”

Up until then, my scholarly life had been centered on philosophies that tried to make sense of the denigration of matter, of the body in particular, mostly taking form in cultural fantasies of women’s bodies and the planet as both playground and dump. Merged with the changing states of my own loss, those same questions began to shift to the dead body—what we think of it, what we do with it, and why. Death would retreat, and my grief, too, would eventually resolve. These questions, however, would remain unshakable by my side, leading me to grapple with the implications of our contemporary death practices at the same time that I become part of a growing movement to change them.

My father would have the same death rites as his father and his grandfather. Two days of wake followed by a Catholic mass and church burial. Over the course of a week his body would journey that well-trodden path from the funeral home, to the church, and then into the cemetery. We had seen my father off and provided the care to do it. And though, overall, the funeral and familial support helped me say goodbye, I still couldn’t get the body off my mind.

It’s no secret that over the course of the last century the corpse has become increasingly hidden from sight, that the distance between the dead and the living inner circle has grown cavernous. Where funerals once happened in the home, they now occur in a place meant to mirror the home. Funerary viewings are still customary, but their popularity is waning. Nearly 70 percent of Americans die in hospitals, long-term care facilities, or nursing homes. Dead bodies are kept in morgues and transported to funeral homes, and often buried or cremated out of sight of the bereaved. And what funeral directors call “direct cremation,” where the body travels en route from the morgue to the crematory, is on the rise.

Before my father’s body was seen through to the end, it would first be embalmed, then placed in a wood and metal casket, and, finally, encased in a reinforced concrete vault that had been inserted in the ground. At the same time that this walled-off city of contaminants prohibited his body immediate access to the elements (and, conversely, the elements access to his body), his body had also become contaminated, poisoned. His body had, in all practical ways, become a problem. It seemed the most sinister of reversals. What kept my mind on the body were these facts. What plagued me wasn’t simply the lack of cultural proximity to the dead, but, also, the dead body’s distance from the whole of nature.

It wouldn’t take long to find that what stirred in me was also being felt elsewhere. On the heels of a budding movement in the United Kingdom, the first green, or natural, burial ground in the United States—Ramsey Creek Pre- serve in Westminster, South Carolina—had opened just two years prior. And because discontent with the status quo is as individually felt as it is shared, the next decade and a half would bring the creation of more green burial grounds throughout the United States, all messaging a rejection of standard funerary forms and a desire to do death differently.

It would be many years after my father’s death that I would come to find out that, like me, Ramsey Creek founder Dr. Billy Campbell had his own first inklings of greening up funerary care with the death of his own father back in 1985—although it would take over a decade to cultivate his vision. In those early days I longed for even such small connections. But what I wanted most was to find others who were also waking up, and who wished to work together toward the greening of death.

What exactly is this greening?

Green burial—also referred to as natural burial—aims to care for the dead with minimal impact to the environment. Where conventional burial typically includes embalming and caskets, often sealed, and manufactured from finished hardwoods and metals and sometimes non-plant-based materials as well as the use of reinforced concrete vaults or liners, whole-body green interment steers clear of all of them. Green burial grounds are on the rise in the United States, hovering somewhere around one hundred at last count. In all of them, rain, wind, and sun are respected in the work of decomposition, as well as the pressure of earth, stone, and roots. Human decay is regarded as good and valuable, as microbes and insects descend to feed on the dead. As food and nourishment for other creatures, the corpse is of consequence to the land and to the species of mammals, birds, amphibians, plants, and insects that inhabit it. In essence, the corpse is of consequence to the planet.

In many ways, green burial is about a return to the past—to the way we buried our dead in the United States over 150 years ago. Simple methods. Dust to dust.

Except that times have changed.

Since Jessica Mitford’s best-selling The American Way of Death (1963), cremation has been on the rise. The effect of Mitford on cremation rates can- not be understated. Her criticism of the funerary industry hit a chord with Americans—our funerary ways were unnecessarily excessive and expensive, and the funeral industry needed to be reigned in. Over the last forty years, Americans have responded to that sensibility by increasingly making the choice to be cremated. A century and a half ago, that choice didn’t even exist. Pyre burning is an ancient tradition, but not one that has been practiced in the United States with any regularity. And the modern crematorium didn’t come into being until the turn of the twentieth century, although it would take several decades for it to make any headway. Today, however, nearly half of all deaths in the United States resolve in cremation annually, with some states even higher.

Next to whole-body green interment, cremation is the second most environmentally sound way of disposing of the dead. If it’s less than ideal that’s mostly because any time something is burned ecological health is at risk.

Still, only about 13 percent of those who choose cremation claim the environment as a reason. All of these years later, Mitford’s call to cost and simplicity remain the driving factors. Unfortunately, this call hasn’t much helped to curb our unsustainable death ways that pollute, dishonor decay, and sever humans from the earth. In many ways, in not more robustly taking up the charge of our ties to nature, the way cremation has been practiced over the last half a century has left us even more stranded from a meaning of death, and a dead body, that belongs to the planet. In the meantime, conventional death ways have continued in their work of reversals, where flesh, blood, and bone have been turned into contaminants, and pollutants masquerade as protectors.

The greening of death, however, doesn’t mean an admonishment of cremation. On the contrary, for cultural, personal, political, and economic reasons, the movement largely regards incineration as a greener option than conventional burial. I say “greener” because cremation does pose some environmental risks. Crematories emit mercury and furans and other by-products of burning while also using a good deal of energy. Still, most green burial grounds do accept interment and/or scattering of cremated remains. The environmental problems of cremation are taken up by green burial advocates by pushing for better crematory filters that would help limit the amount of contaminants transmitted into the air, while also calling for more renewable forms of energy to run them.

The world around us has changed in other ways, too. Environmental destruction has transformed the planet into a very different place than it was when dust to dust was last the norm. Behind us stretches a fifty-year history of environmental activism and, yet, the planet is still on fire. For those of us paying attention, we’re desperate for ways to put it out. This is all to say that the movement is interested in not only what goes into our cemeteries, or for that matter what doesn’t, but also, how much energy was expended to fulfill an interment? A cremation? Where did the energy come from? What about carbon emissions? Was worker health jeopardized somewhere along the way?

There is also, of course, waste in terms of that other green—money. Be- cause the cost of most conventional death care arrangements are wrapped up in expensive caskets and burial vaults that are eschewed in green death care all together, a whole-body green burial should generally cost less. However, depending on geographical location and whether or not the cemetery is using any of the monies for purposes beyond the burial itself, like the restoration of habitat, the price of plots may vary. Which brings me to another movement goal—landscape-level conservation—which fundamentally challenges the standard lawn-park design of cemeteries that requires gridded rows, machine- cut and polished stones, highly manicured turf, and, at least for the larger and more well-funded cemeteries, the use of pesticides.

Of course, the pollution of conventional burial is nothing in comparison to the really big problems facing us, like climate change, water scarcity, and threats to our food system. The green burial movement, however, is doing more than offering more sustainable death care choices that would contribute to a healthier and less wasteful planet. Like me, other folks are waking up to lost ways of knowing death, especially in terms of recovering older practices. Out of this recovery, renewed meanings are emerging—ones that are rekindling our bond with the earth.

And herein lies the greatest potential green burial has to offer—rectifying our severance from the natural world in both symbolic and literal ways. As green-friendly funeral director, Bob Fertig, said to me, “The focus on the environmental aspect [of the green burial movement] is wonderful, but I think what sometimes gets lost in that is the potential for closeness with death and the way that it makes people feel.” When green burial advocates, especially those who deal with grieving families, say that green burial provides great solace to experiences of loss, there’s no doubt that such comfort has been born by connection to not only each other, but also to the earth itself.