Democratic base wants impeachment: But does anybody else?

Leading Democrats warn the party base: America's not ready to impeach Trump, even after the 2018 elections 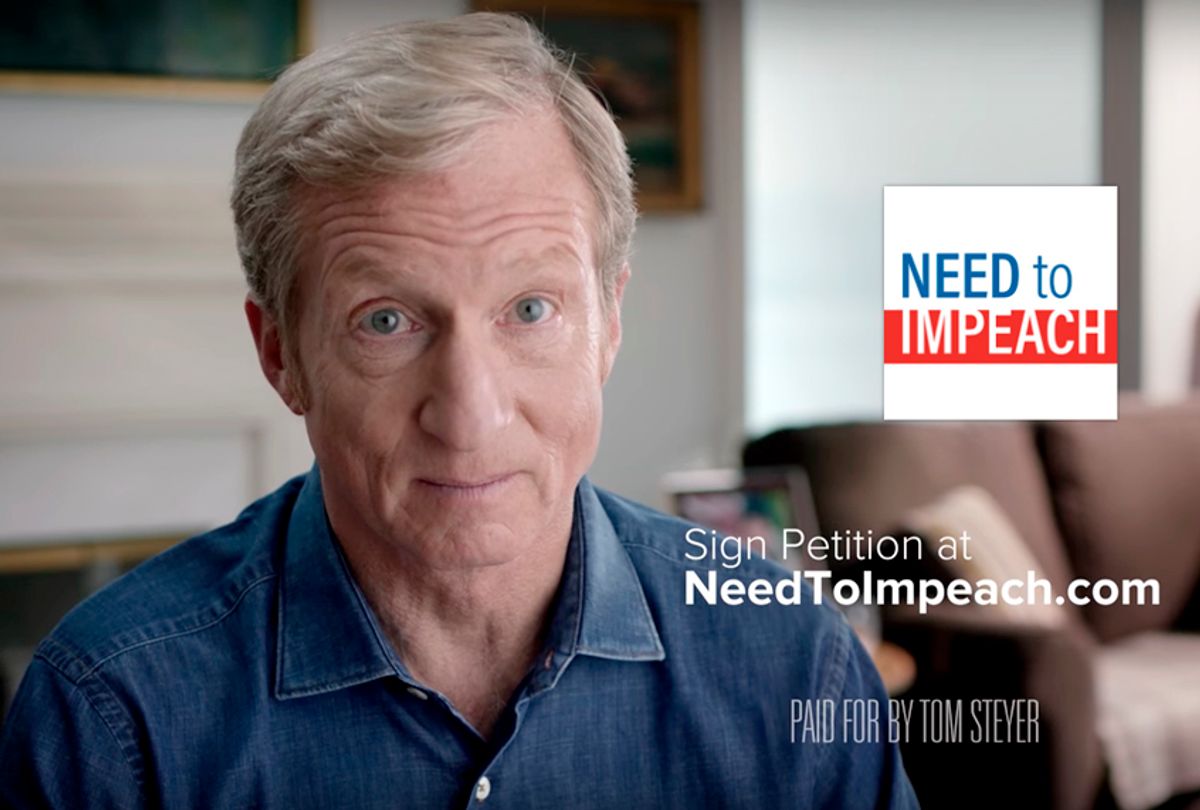 Congressional Democrats have a problem: Most of their voters want President Donald Trump to be impeached. But so far, the rest of the country does not appear to agree.

In an opinion survey conducted Dec. 13-15 by NBC News and The Wall Street Journal, 70 percent of Democratic respondents said they wanted Trump impeached. Among self-identified independents, 40 percent supported the idea, while only 7 percent of Republicans backed it.

In total, just 41 percent of respondents said they supported starting impeachment proceedings against Trump. That number is larger than the 36 percent of people who said they would vote for Trump if he runs for re-election, which is strikingly bad news for the president. But it's significantly smaller than the 54 percent of respondents who said they would not support impeachment proceedings against the president in the House of Representatives.

The NBC poll tracks closely with results from an August survey from the nonprofit survey organization PRRI, which found 40 percent of respondents favoring impeachment with 53 percent opposed.

The lack of public support has not deterred some Democratic donors and elected officials from trying to make the case for impeachment.

Tom Steyer, one of the Democratic Party's largest donors, has spent at least $20 million of his own money promoting impeachment via television advertising. He's also vowed that he will not support Democrats financially who refuse to make impeachment one of their campaign planks.

Trump has "definitely met the criteria and he is a threat to the American people. The question is, why aren’t people willing to stand up and say that? I don’t understand it," Steyer said in a November interview with ABC.

Steyer's initiative was likely influenced by American University professor Allan Lichtman, whose book "The Case for Impeachment" moved the idea much closer to the political mainstream early in Trump's first year. Salon's Matthew Rozsa interviewed Lichtman a few months ago for the video segment embedded below.

Steyer and many others who favor impeachment have cited the Trump campaign's contacts with Russia and the president's responses to special counsel Robert Mueller's subsequent investigation as evidence of "high crimes and misdemeanors." But an impeachment resolution filed Dec. 6 by Rep. Al Green, D-Texas, did not mention Russia at all.

Instead, it cited Trump for having "produced a demonstrable record of inciting white supremacy, sexism, bigotry, hatred, xenophobia, race-baiting, and racism," primarily through his speeches and Twitter posts. Green's resolution also argued that Trump should be impeached for making spurious claims about "voter fraud," including his frequent statements that "millions of people" voted illegally for his former Democratic opponent, Hillary Clinton.

Green had originally attempted to force a vote on his measure in October, but was rebuffed by party leaders, including Rep. Nancy Pelosi of California, who gave a simple "no" when she was asked whether she supported impeaching Trump at the time. Using an obscure House rule, Green was able to force a procedural vote on his motion. It failed overwhelmingly, 364-48.

Other Democrats have introduced articles of impeachment but so far have failed to get them to a floor vote. Green was among a group of six House members who tried in October to garner support for another set of articles of impeachment that did not mention allegations of Russian collusion but alleged that Trump had obstructed justice by firing FBI Director James Comey.

While Democratic members of Congress who represent "purple" districts with high percentages of Republicans have been particularly skittish about impeachment, some of the party's more left-leaning members have also spoken out against the idea. Their response is that many Americans are simply not ready for the idea.

“There’s nothing any of us can say in Congress that is going to change people’s view of Donald Trump,” Rep. Ro Khanna, D-Calif., one of the more progressive House members, said in November. “What they need is [for] us to help them form their view of whether the Democratic Party is ready to lead.” Khanna also spoke against Steyer's TV ads, saying that he did not think they were helpful.

Even some supporters of impeachment say that more work has to be done to build the case. They and other wary Democrats frequently point to the parallels between the current situation and the Republican-led effort to impeach President Bill Clinton in 1998 on perjury and obstruction of justice charges.

Republican voters strongly supported that move at the time, but the rest of the country did not. The Republican impeachment effort failed -- technically, Clinton was impeached by the House but acquitted in the Senate -- and led Clinton to the highest poll ratings of his presidency as the public turned against Republicans. The GOP lost House seats in the midterm elections later that year, the first time since 1934 that a non-presidential party had done so.

"As someone who favors impeachment, I feel strongly it needs to be bipartisan," Rep. Jared Huffman, D-Calif., told Politico earlier this month. "I think that's one of the things Republicans got wrong in '98. The bipartisan piece of it is assurance to the public that you're not just playing partisan games. We're a long way from Republicans joining us."

Pelosi and other top Democrats have opposed beginning any impeachment proceedings before special counsel Robert Mueller has completed his report on Russian election meddling and the unanswered question of whether Trump or his former campaign aides directly colluded with those efforts.

"If you're going to go down the impeachment path, you have to know you can do it not in a partisan way," Pelosi told The Los Angeles Times in November. "We have an investigation in the Justice Department that is seeking facts. We don't want it to look political."

Given America's deeply divided media environment -- where conservative Republicans tune in to outlets tailored specifically to them while the rest of the country gets its news from mainstream sources -- getting Republicans to take impeachment seriously may prove extremely difficult, short of a "smoking gun" directly linking Trump to Russian collusion or obstruction of justice. And such hypothetical evidence still might not prove persuasive to Republican voters, who have been conditioned to mistrust all sources of supposedly objective information.

“The Watergate affair turned conservative skeptics of Richard Nixon into hardcore supporters, drawing out the immediate crisis and deepening divisions in the long term,” historian Nicole Hemmer noted earlier this year. “Conservatives at the time refashioned the scandal into a tale of Democratic hypocrisy and media hostility — a narrative that many Republicans have adopted once again to explain away the emerging Trump scandals.”

That process was perhaps best exemplified by the late conservative writer Stan Evans, who half-jokingly claimed that he “didn’t like Nixon until Watergate.”

With Fox News repeatedly airing segments comparing the Mueller investigation to a coup d’état and conservative radio hosts like Rush Limbaugh and Alex Jones claiming that a “deep state” network of unnamed bureaucrats is out to get Trump, getting any significant Republican support for impeachment will be challenging.

For his part, Steyer appears to believe that Democrats will never build support for impeachment if they refuse to talk about it at all. “My question is, what can I do to make a difference?” Steyer said. “I think we’re in a political crisis.”

Beyond the polling, the biggest problem Democratic impeachment backers face is that their party does not control the House. Should that change in 2018, however, what Democrats do will necessarily be arbitrated by Rep. Jerry Nadler of New York, who stands to become chair of the House Judiciary Committee under a Democratic majority. Right now, he does not sound particularly enthusiastic.