Will a largely white district in southwestern Pennsylvania provide the Democrats their first big breakthrough? 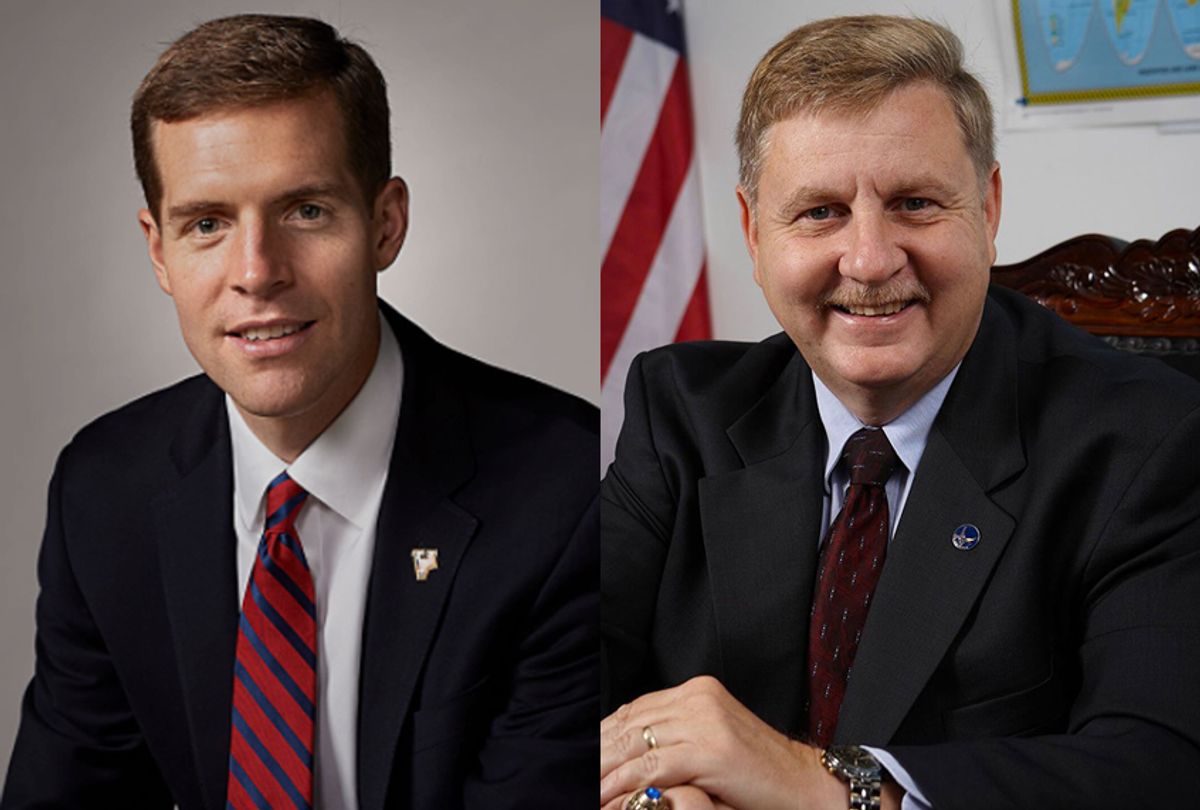 When Barack Obama made his infamous remarks about “bitter” Americans who “cling to guns or religion” at a closed-door fundraiser in San Francisco during his 2008 presidential campaign, he pointed to “small towns in Pennsylvania.” Those bitter clingers got their revenge eight years later when they elected Donald Trump, the first Republican presidential candidate to win the Keystone State in decades. Democrats are now singing a different tune in hopes of flipping a Pennsylvania congressional seat in deep-red territory, by courting a lot of those historically blue-collar Democratic voters who took a chance on Trump.

Democrats, seeking a head start in 2018 ahead of the midterms, are cautiously eyeing nearly any chance to compete in congressional special elections, even in heavily Republican districts. Doug Jones' election to the Senate from Alabama, perhaps the reddest state in the nation, has fueled immense optimism among many Democrats. Their first shot in the new year -- a special election in Pennsylvania's 18th congressional district -- looks similar in some ways to that last special election they won, as it also comes courtesy of a Republican taken down by a sex scandal.

Rep. Tim Murphy, a Republican stalwart, was forced to resign in October after 14 years in the U.S. House of Representatives. A former commander in the Navy Reserve, Murphy became embroiled in a U.S. Navy investigation when his extramarital affair came to light because his name was mentioned in the divorce proceedings of his former mistress. (Adultery is not illegal under civilian law, but is viewed as a crime under the Code of Military Justice.)

Murphy, who is a vociferous opponent of abortion, allegedly asked his mistress to consider an abortion when she thought she might be pregnant. On the same day as the Pittsburgh Post-Gazette broke the story, Murphy voted in favor of pro-life legislation in the House.

So Murphy has resigned. Now the race to replace him pits a moderate Democrat against an extreme, pro-Trump Republican, in a predominantly white district of southwestern Pennsylvania (largely the southern suburbs of Pittsburgh) that Trump won with 58.1 percent of the vote. Some Republicans fear they are about to lose another longtime GOP seat after nominating a pro-life conservative not far from the mold of Roy Moore.

A 20-year Air Force veteran with a Ph.D. in international affairs, Saccone boasts an impressive military résumé — which includes spending a year in North Korea as part of an effort to prevent the regime there from developing nuclear weapons. But all that is arguably overshadowed by his extreme political views.

Calling himself  “Trump before Trump was Trump,” Saccone promised the leading Republicans of the 18th district that he would “rile up the base” to support Trump’s agenda by running to Murphy's right.

Saccone scored an upset in a blue district when he won his state house seat in 2010 but since then has pushed a right-wing Christian agenda. By his own admission, Saccone has no concept of "separation of church & state.” He has proposed bills to allow the posting of “In God we Trust” at public schools and has urged all schools to read the Bible during class time. He sponsored a non-binding resolution to declare 2012 as the "Year of the Bible.”

He introduced four pro-gun bills in the current state-house term, including a measure that sought to make gun owners a “protected class” and to force establishments like Chuck E. Cheese to allow guns on their property.

Meanwhile, Democrats have nominated a moderate former Marine who prosecuted gun trafficking cases as an assistant U.S. attorney. Conor Lamb, a 33-year-old neophyte, has never run for office. But Democrats are hoping that his candidacy can excite Democrats eager for a fresh face without scaring off too many of the Republican-leaning voters who dominate the district. (This was, of course, also the plan with the ill-fated Jon Ossoff in Georgia.)

Lamb, who completed his active duty service in the Marine Corps in 2013, comes from a prominent political family in Pennsylvania. His uncle, Michael Lamb, is the Pittsburgh city controller, and his grandfather, Tom Lamb, was the Democratic majority leader in the state Senate back in the 1970s. As a Marine lawyer, Lamb prosecuted a Naval Academy instructor who had raped female service members. As an assistant U.S. attorney in Pittsburgh for three years, he helped to establish a Department of Justice office focused on combating the opioid crisis — something Democrats hope to highlight in a state and region that have faced soaring overdose rates.

Lamb has done his best to avoid thorny social topics, but he hasn’t shied away from Democratic orthodoxy on issues like legal abortion and reasonable gun regulations. “I think the choice should remain with individuals, not the government,” he said at the Democratic nominating convention last month when asked about abortion. “I am pro-Second Amendment,” he said in an interview that same day, but he added that “we need to have the conversation” about gun regulation.

Although the campaign for Pennsylvania's 18th won’t fully get under way until the new year -- the election is March 13 -- Lamb has promised to stress increased protections for seniors, jobs and combating the opioid epidemic. These are issues that Democrats think will resonate in an expansive district that borders West Virginia to the south and west, and includes industrial towns, farming villages and affluent Pittsburgh suburbs. (According to the Census Bureau, the district is 96 percent white.)

Despite the result in Alabama, Republicans are undefeated in five House races in 2017. But as Politico notes, Republican candidates have consistently underperformed Trump’s 2016 margins, winning less than 53 percent of the vote in all four contested races of 2017 — including in districts where Trump won up to 60 percent.

Trump’s approval rating in Pennsylvania has slipped dramatically. A Franklin & Marshall College poll from late September found that only 29 percent of voters in the state had a positive view of Trump’s job performance, down from 37 percent in May. Last Friday, the Cook Political Report changed its rating of the race in the 18th district from “Likely Republican” to “Lean Republican.”

In other words, Democrats smell blood in the water. There is “the potential to elect a Democrat” in the district, Pennsylvania Democratic Rep. Mike Doyle told Pennsylvania pundit Salena Zito, adding that “it has to be the right kind of Democrat.” The congressman said, “That’s why we’re kind of excited about Conor, because he sort of fits that bill.”

Democrats hold a 70,000-voter registration advantage in the district, according to the Pennsylvania secretary of state. But the GOP-controlled legislature drew Murphy’s district in 2011, specifically to favor the Republican. In the past two elections, Democrats have received more votes for Congress statewide in Pennsylvania, but the GOP-drawn map has given Republicans more seats in Congress. The state Supreme Court has fast-tracked a lawsuit challenging the state map as an unconstitutional gerrymander.

Tim Murphy ran unopposed in 2014 and 2016 — when the AFL-CIO, for reasons best known to its leaders, endorsed him. Pennsylvania's AFL-CIO has endorsed Lamb this time, which could be a crucial factor in a blue-collar region with a strong labor base.

The race “will be a true litmus test not just for unions but for America,” Darrin Kelly, the incoming head of the Allegheny County Labor Council, told the Pittsburgh Tribune-Review. Saccone has backed union-opposed measures like legislation that would make paying union dues voluntary.

National Democratic groups have not committed to this race yet, likely because the 18th district is whiter and wealthier than most in the region. But that may change. While Saccone has already won the backing of national right-wing advocacy groups, including Grover Norquist's Club for Growth, he has also joked about having no campaign staff. He had planned to run for the Senate until Murphy resigned. The White House is also considering sending Trump or some of his Cabinet members to motivate voters ahead of March’s election, according to a report in The Washington Post.

Polling shows that voters across the country, by double-digit margins, want Democrats to control Congress. But G. Terry Madonna, director of the Center for Politics and Public Affairs at Franklin & Marshall, told the Pittsburgh Tribune-Review that it would take a "revolution within the electorate" for a Democrat to win the district.

Saccone’s extreme record, Trump’s unpopularity and Lamb’s moderate, "electable" veneer -- along with the campaign donations that pour into a nationally watched race -- might make that revolution possible. This race in the heart of Trump country will set the tone for 2018.