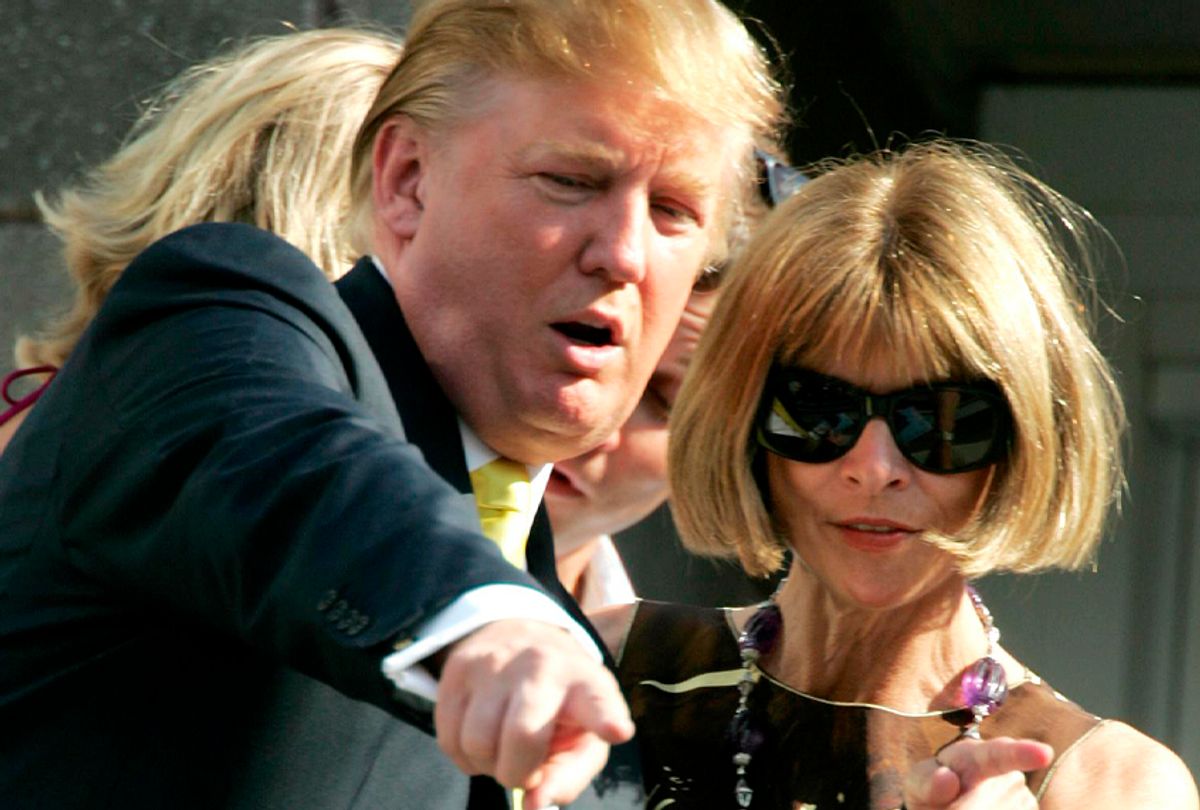 While many, including Salon, criticized both Kosoff and the Condé Nast publication that employs her for the off-tone, unfortunately-gendered attempt at breezy humor, Trump did not join that chorus of feminist critics. Instead, he focused on the current state he imagined the magazine's management to be in following a statement the publication released Wednesday evening that said the video "was an attempt at humor and we regret that it missed the mark."

On Thursday morning, the president wrote that "Vanity Fair, which looks like it is on its last legs, is bending over backwards in apologizing for the minor hit they took at Crooked H." In this statement, "Crooked H," would be winner of the popular vote in the 2016 presidential campaign, Hillary Clinton.

The commander in chief continued, "Anna Wintour, who was all set to be Amb to Court of St James’s & a big fundraiser for CH, is beside herself in grief & begging for forgiveness!"

While Anna Wintour is indeed the editorial director of all Condé Nast titles, she is less involved in the day-to-day operation of Vanity Fair and more involved with the magazine for which she is famously the editor-in-chief, Vogue. She may have had some hand in the statement in response to the public perception of the video, but it's unlikely she even knew of that video's creation until it had become an issue in the media. Hence, it's hard to lay any of this at her feet.

It is true, as the president says, that many believed Wintour would have become the American ambassador to the UK (aka, the ambassador to the Court of St. James) either under Obama or Clinton, based in part on her fundraising efforts for the Democratic party. Under any presidential administration, ambassadorships to friendly nations are frequently sinecures awarded to loyal party donors.

There has been no evidence, however, that Wintour was in a deep state of emotional distress over response to the Vanity Fair video and perhaps lying in tears on her bathroom floor, eating Entenmann's chocolate cake out of the box. The statement issued by Condé Nast is, at best, a non-apology and nowhere close to "begging for forgiveness."

It is, as well, difficult to argue that Vanity Fair is "on its last legs." While the full financials for all Condé Nast titles are kept private to the company, reports suggest that the glossy periodical enjoyed a circulation spike during the 2016 presidential campaign. Indeed, following one of Trump's various negative tweets about the title, subscriptions reportedly surged.

As well, the magazine is now under a new editor-in-chief, Radhika Jones, who has taken over for the retired Graydon Carter. Experts on the industry expect good things from her.

Carter famously helped create the beloved Trump appellation "short-fingered vulgarian" when he was the editor of Spy in 1988. Carter claimed that Trump still sent him occasional letters containing photos of the future president's hands in order to disprove the critique until as recently as 2015.

Finally, it's confusing as to why Trump would attack Vanity Fair at all given that its writer was suggesting his primary bête noire, Clinton, should retire from politics. Perhaps it is less what the magazine said than the fact that it apologized for it that interests the president. Apologizing and admitting wrong, in the Trumpian mindset, are the worst sins of all.

While Trump's battles with Vanity Fair have been many over the years, his conflict with Wintour is somewhat of a new thing, as Business Insider's Brett LoGiurato helped point out with this tweet:

Yes. Yes, of course they do.