Warlocks, witches and American stampedes: The built-in dangers of #MeToo 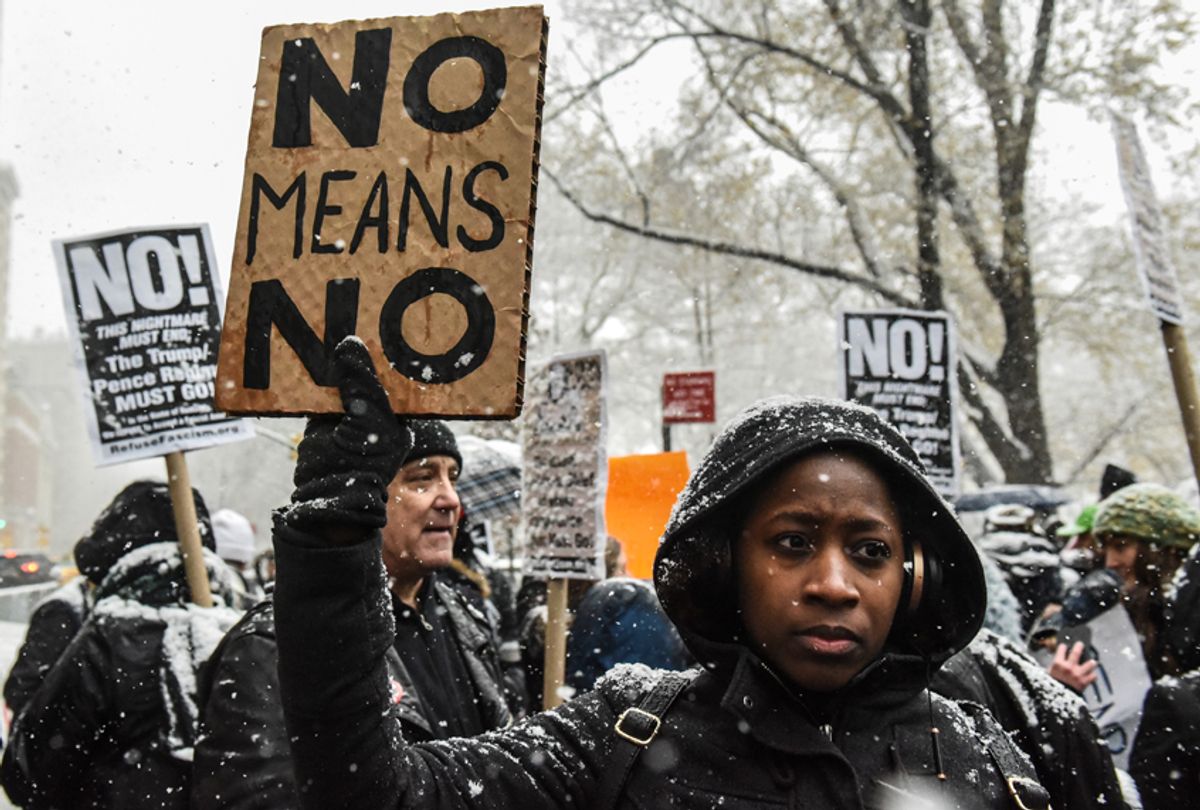 This article originally appeared at the History News Network. Republished by permission.

Whenever Americans sense that civil society is in danger or falling apart, certain inflamed champions of traditional values and liberating alternatives gin up public paroxysms and stampedes against enemies they blame for the crisis. Brandishing what the civic theologian Reinhold Niebuhr called “emotionally potent over-simplifications,” such crusaders on all sides rampage back and forth, their chosen targets often guilty enough of something to make their scapegoating plausible.

But no matter whether those who intend to deliver us from evil sound their alarms impulsively and righteously or coolly and strategically, they divert public attention and energy from threats far more serious than the zealots themselves are willing to acknowledge or confront.

No one should doubt the depth and perversity of the misogyny that women have suffered at the hands and in the gazes of men; of the racism that African-Americans have suffered in the grip of whites who are vicious but also, quite often, unconscious; of the curse and crushing debasement that Jews have suffered at the hands of crusaders across millennia; and, yes, of the quiet little stabs of heartbreak and self-doubt that accumulate in tiny increments in the young lives of working-class whites losing jobs, pensions, homes and self-confidence.

For some, the hurts feel so primal and all-enveloping that they lash out at only the most proximate or the most imaginary and symbolic perpetrators, instead of at those, more distant and powerful, who bear far greater responsibility. Precisely because the affronts and hidden injuries of racism, misogyny, class and caste are so grinding but also so ubiquitous and routine, people who have grown up enveloped by them and have internalized them may err by seeing villainy even where it’s absent.  What W.H. Auden saw happening to Western civilization on the eve of World War II is happening within the American civic-republican society that had, at times, offered a refuge and an alternative:

In the nightmare of the dark
All the dogs of Europe bark
And the living nations wait
Each sequestered in its hate.
Intellectual disgrace
Stares from every human face
And the seas of pity lie
Locked and frozen in each eye.

The almost incapacitating pain that predisposes some zealots to ride and channel the pain of others could become socially redemptive if, like the market madness that dispossesses and demoralizes people, it could be restrained and sublimated. But where is the civic leadership strong enough to curb stampedes against those who are mostly just casualties, not causes, of our distress? Who or what might stop ignorant armies clashing by night?

The #MeToo movement might do it, if its richly, deeply justified anger can be kept from turning to rage, stereotyping and sweeping accusations that submerge vital distinctions and real dangers. A glance at other moments in our history shows that endangered groups’ imagined sovereignty and wild projections onto others of their own inevitable imperfections and fears have deranged American public life since the 1690s, when a Puritan community, faltering under ecclesiastical, economic and demographic pressures, resorted to scapegoating witches – unstable women and girls it decided had been taken by Satan even though they were probably riding the same deep cultural undertows that were panicking their accusers.

In the 19th century, the enemy was Irish-Catholic immigrants, who Republicans said in 1884 were bringing “rum, Romanism, and rebellion” to the noble Protestant republic. During and after World War I it was German-Americans, anarchists, “Reds” and pushy Hebrews. In the 1930s, even the rising but embattled American-Communist Popular Front assailed doubters and slackers as lackeys of the ruling class. The Cold War brought “lists,” intimidation and show trials of Americans who were said to serve Stalin, the Satan of that time. And of course, in almost every decade, the designated scapegoat has been the "feral," dissolute Negro and African-American.

On and on it has run: against civil-rights “agitators,” hippies and Vietnam War “draft-dodgers” and, from the “counterculture" of the 1960s, against “pigs” (police officers) and anyone suspected of racism, male chauvinism and selling out to bourgeois society. Soon enough, the counterculture itself “sold out” to an over-the-counter culture. But before long there were American Muslims and critics of the Iraq War to blame for the deeper dangers that few are willing to name.

Some of the blamed were guilty as charged. But most weren’t, and their accusers' failure to draw the necessary distinctions doomed the stampedes to falter before reactions equally deranged.

As I surveyed these distempers in 2016, a stampede against “witches” was just peaking  – a lavishly funded, brilliantly directed onslaught against liberal colleges’ “politically correct” “snowflakes” and “cry-bullies,” some of whom were themselves stampeding against straight white males, presumed to be carriers and perpetrators of racism and “rape culture.”

That conservative campaign against the “politically correct” was hijacked by Donald Trump to serve a larger, more thunderous stampede. And now, as if in retaliation, the paroxysm against the white male bogeyman has burst its campus bounds and is raging across corporate America and political institutions. The alacrity with which managers are firing prominent, even iconic men – not only for proven intimidation and assault but also for gestures or words, however old and seemingly anodyne at the time, that prompted a woman to say now that she “felt humiliated” – has moved conservative journalist Claire Berlinsky, writing in the American Interest, to warn that the witch hunts of the past may be outdone by what she calls “The Warlock Hunt.”

Berlinsky, who knows some history viscerally as well as intellectually – her grandparents were German-Jewish refugees from Hitler – suggests that although the “Me Too” revolution is as well-justified as the movements that overthrew Czarist Russian tyranny and Western imperialism’s gratuitous humiliation of Germany in 1919, a stampede against sexual assault could end by trampling and devouring its own, as so many other, once-hopeful revolutions have done.

That analogy seems a stretch, but in one important sense it may not go far enough. Berlinski, who wrote the conservative-pleasing "‘There Is No Alternative’: Why Margaret Thatcher Matters," stops short of warning that if a movement breaks a structure’s glass ceiling but leaves its foundations and walls intact, it’ll have too many glass-ceiling breakers such as Prime Minister Thatcher or Gov. Sarah Palin, or maybe even Facebook’s Sheryl Sandberg, who do little more to lift their oppressed sisters than dictator-plutocrats who broke the ceiling of white Western colonialism did to lift their brothers and sisters still down in the basement. Ending sexual harassment in chicken-processing, fast-food, and Big Box businesses is imperative. But will it strengthen wages, benefits and labor rights?

Having resisted a few different stampedes myself over the years – counterproductive black protests against grinding American racism (as in the Tawana Brawley and O.J. Simpson cases); the stampede to war with Iraq in 2003; the conservative campaign against “politically correct” campus follies – I hope that I can highlight some differences between struggles for justice and cries for revenge, between due process and demagoguery of any hue. Both the hunters and hunted in such matters tend to follow a pattern, and sometimes they even swap roles.

Too often, both hunters and hunted will do anything but name and challenge civil society’s truly primary danger: the ever-more intimate groping, goosing, tracking, and indebting of millions of Americans, not only or even mainly by racist and sexist carriers of the damage, dangerous though they are, but by civically mindless, algorithmically driven marketing engines that transform deliberative citizens into stressed, impulse-buying consumers to whom they peddle palliatives and escapes that only compound the damage and danger.

To stop this downward spiral, we'd need to avoid stampedes toward “rough justice,” laced with revenge, that mistake noxious carriers of oppression for its causes. We need to view them more accurately as bearers and casualties of a disease whose etiology and accelerants aren’t much challenged by a Thatcher or a Trump or – dare I say it – an Obama or Clinton. None of them has insisted strongly enough that society and the polity have the ultimate responsibility for regulating an increasingly consolidated but antisocial corporate economy.

One Sunday in 1697, seven years after the last execution of a witch in Salem, Massachusetts, Judge Samuel Sewall, who'd presided over the trials, stood, his head bowed, in Boston's Old South Meeting House as the pastor, Samuel Willard, read aloud a note from him confessing his "guilt contracted ... at Salem" and his desire "to take the blame and shame of it, asking ... that God ... powerfully defend him against all temptations for Sin for the future. ..."

Defense Secretary Robert McNamara, hard-driving architect of the Vietnam War, confessed tearfully in Errol Morris' film “The Fog of War” that it had been undertaken with deceit and delusion. Republican political operative Lee Atwater, whose television ads for George H.W. Bush implicitly targeted feral blacks in the 1988 election, begged African-Americans’ forgiveness on his deathbed. Many destructive “revolutionaries” of the 1960s have repented, too, or at least reconsidered.

In 1944 and ‘45 my father was a corporal assigned to the command headquarters of the 277th Battalion of a very different army, U.S. Army Combat Engineers, as it clanked its way from Germany’s western border to its North Sea coast east of Jutland. Sometimes he had to supervise Wehrmacht prisoners because, as a son of Lithuanian Jewish immigrants, he knew Yiddish, which is about 80 percent German.

He did it with a mixture of grief and revulsion, even as a conqueror.  One day, when the 277th commandeered a Nazi-friendly baron's estate in the town of Hohne, my father and others scouted a cottage behind the mansion and found a silver-maned, well-spoken man who said he was a caretaker but whom the G.I.’s suspected was closer to the missing baron. As some of them prodded him down the hill toward the mansion, jabbing him roughly with gun barrels, my father heard himself say, suddenly, almost instinctively, “Cut that out.”

“Why? You should enjoy this Sleeper, you’re a Jew.”

He had no illusions about Nazism’s brutality and perversity. But he was a young American, emancipated from his ancestors’ European hell, and he thought he was fighting for a world better than one in which the tables of unjust power are merely turned. He wanted a world where justice – dare we say “due process”? – runs deeper than revenge. Armies that brandish too many potent oversimplifications win only Pyrrhic victories and end up compounding the threats they set out to erase.