Year of the "alt-right": As 2017 ends, it's less visible, but still building a movement 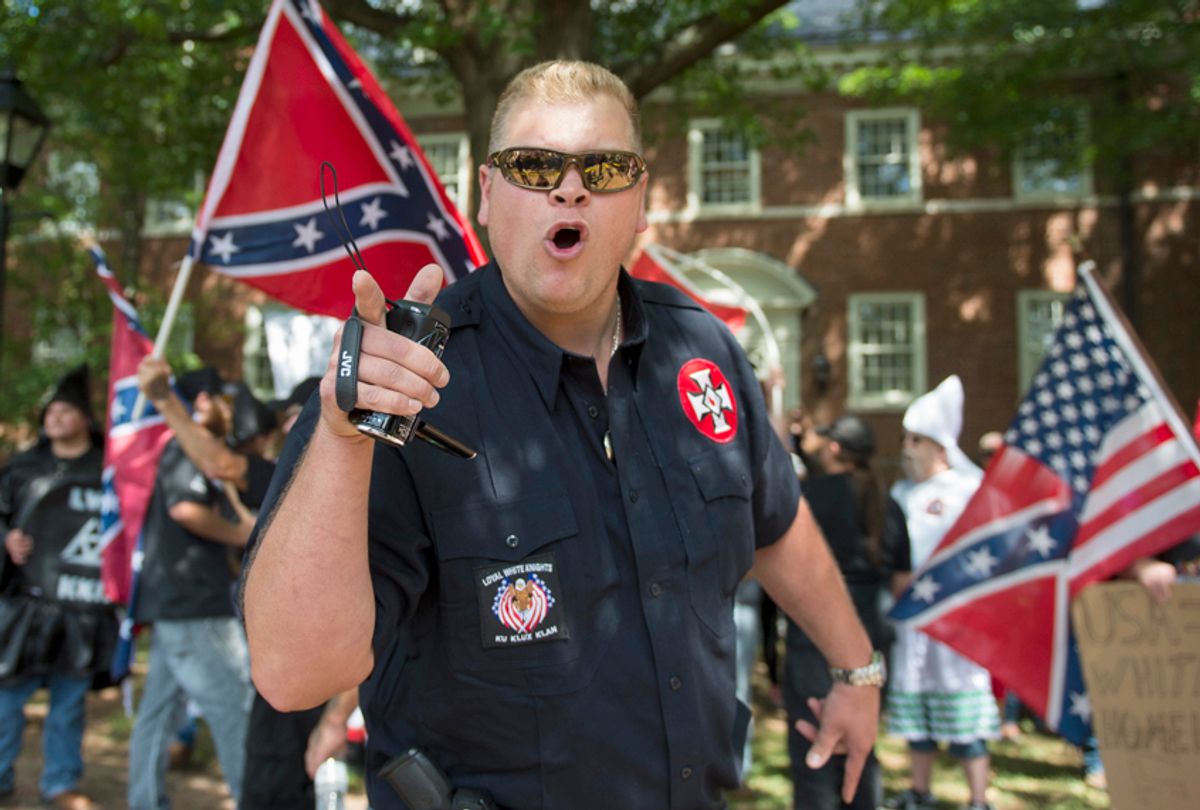 As many feared it would be, 2017 was a year marked by the rise of neo-Nazis, white supremacists and the other "alt-right" types that Hillary Clinton memorably nicknamed a "basket of deplorables" during the 2016 campaign. The "alt-right" was noticeably emboldened, of course, by the election of a president who ran on an openly racist platform. An open racist like Donald Trump spent the campaign and the first months of his presidency openly courting white supremacists by retweeting them, hiring them, treating them as informal advisers and even calling them "fine people" after a neo-Nazi rally in Charlottesville, Virginia turned violent and resulted in the death of an anti-racist protester named Heather Heyer.

At the end of the year, however, there's an open question about the state of the "alt-right." It had a banner year in gaining visibility and recruiting members, but in the wake of the Charlottesville debacle, the movement's efforts to go mainstream and hold big public rallies have largely collapsed. How big the "alt-right" really is now, and how much impact it really has, is not easy to say.

For months, the "alt-right" was doing pretty well at framing itself, in the eyes of many Republicans and even some liberals, as victims of a censorious campus left and violent anti-fascist activists, called "antifa." While the actual evidence for both campus censorship and antifa violence was skimpy and overblown, racists had successfully oriented the debate around the left's alleged villainy instead of the grotesque conduct of those trying to create a jokey, 21st-century reboot of the Ku Klux Klan, adorned with a Pepe the Frog logo instead of a white hood.

"Brad Griffin, a popular blogger in the movement, told me that the defining moment of the past year hadn’t been the election of Trump, but rather the punching of Spencer," Vegas Tenold writes in the New Republic, referring to a viral video of an antifa-style activist clocking white nationalist organizer Richard Spencer. That video was widely shared, not just among leftists who were laughing at this racist twit's reaction, but also among white supremacists who saw it as an opportunity to recruit by portraying themselves as victims.

Yet as the year winds down, it seems that the future of this hate movement is more ambiguous than either its members or their opponents thought it would be, a year into the Trump presidency. On one hand, the "alt-right" still has a powerful ally in the White House, a rabid bigot who reportedly makes racist slurs and is pursuing harsh anti-immigration policies that fit neatly into the "alt-right" vision of making America a "white" nation once again.

On the other hand, "alt-right" efforts at organizing and PR have floundered. While right-wing media still dutifully portrays white supremacists as hapless victims of leftist violence and censorship — and far too many liberals fall for it — that narrative is being eclipsed by the far more accurate story that whatever new label or logo neo-Nazis give themselves, they are still a violent and hateful minority that hopes to destroy democracy.

Milo Yiannopoulos, who looked in 2016 like the best conduit for taking the "alt-right's" message into the political mainstream, had a series of embarrassing public failures. (Yiannopoulos has consistently denied being a racist, an anti-Semite or a member of the "alt-right," but clearly aspired to be the movement's leading interpreter or whisperer.) A video of Yiannopoulos "jokingly" praising pedophilia surfaced, with serious damage to his profile. His attempt to stage a "Free Speech Week" at the University of California, Berkeley, collapsed after the school refused to take his bait. Later, a BuzzFeed article exposed the extent of Yiannopoulos' plan to clean up white supremacist ideology for a mainstream audience, which further derailed his efforts.

The "alt-right" was plagued by its own incompetence and infighting, but what really hurt its PR campaign was the violence. No matter how often its members and leaders tried to position themselves as innocent victims of leftist violence, the inherent tendency to violence that flows from an ideology of racial dominance kept on surfacing.

The year comes to an end, for instance, with the story of a teenage neo-Nazi under arrest for the murder of his girlfriend's parents, who had forbidden her from seeing him, for understandable reasons. This is just the latest in a long line of violent incidents, including murders, allegedly committed by people aligned with this newly emboldened white supremacist movement. The most prominent of these incidents, of course, was the killing of Heather Heyer in Charlottesville, but there has generally been a rise in hate crimes since Trump's election. The FBI reports a two-year rise — correlating, unsurprisingly, with Trump's ascent — though it's difficult to track such crimes accurately, as many incidents go unreported.

This recent murder, however, highlights another common thread seen in many of the most violent incidents of the year. These include the Charlottesville killing, "alt-righter" and conspiracy theorist Lane Davis' alleged murder of his father, the Trump-loving New Mexico school shooter who killed two people in December, the vicious killing of two men aboard a Portland commuter train for defending a Muslim woman from abuse, and many others. All those crimes were apparently committed by men under 40, some considerably younger than that, who had been radicalized by engaging online with other white supremacists.

This is why the recently empowered white supremacist movement is a threat, even as it continues to falter at organizing and marketing itself to the public at large. What white supremacists have now that they didn't have in the past is the internet, which makes it far easier to eschew traditional organizing in favor of building an amorphous, grassroots movement. They may be shying away from big public events after Charlottesville, but the "alt-right" is still churning out a steady stream of propaganda geared at radicalizing young, angry white men.

"These are people who look for excuses in their life," Dean Obeidallah, a comedian who sued a neo-Nazi site for making libelous claims, explained to me on "Salon Talks." "But blaming minorities, or blaming Jews or Muslims or blacks or Latinos for your problems, is wrong."

To be clear, the ability to organize a grassroots coalition in this loose, free-flowing manner has its strengths. Black Lives Matter and #MeToo are both social justice movements that grew as much, if not more, from social media chatter as they did from traditional organizing strategies. But these same strategies also work for groups that are up to no good, including ISIS, which works mainly by spreading propaganda online to inspire young men to self-radicalize. Going into 2018, that will almost certainly be the main strategy of white supremacists: Fewer rallies and staged events, more decentralized social media efforts that lead lost young men to identify with the movement, even if they never attend a single offline event.

Despite Twitter's much-ballyhooed Nazi ban, the company only focused on organizations and left most of the prominent white supremacists -- who tend to hold themselves out as individual brands rather than organizational representatives -- on the service. And President Trump continues to wink at white supremacists from the White House, giving all those self-radicalizing young men the boost they need to keep going even without the public events that dissipated after Charlottesville. White supremacists may be harder to see at the end of 2017, but the problem they represent is not going away any time soon.