Is the Senate really up for grabs after Alabama? Just maybe

Republicans still hold an advantage, but with Steve Bannon trying to destroy the party, Democrats have an opening 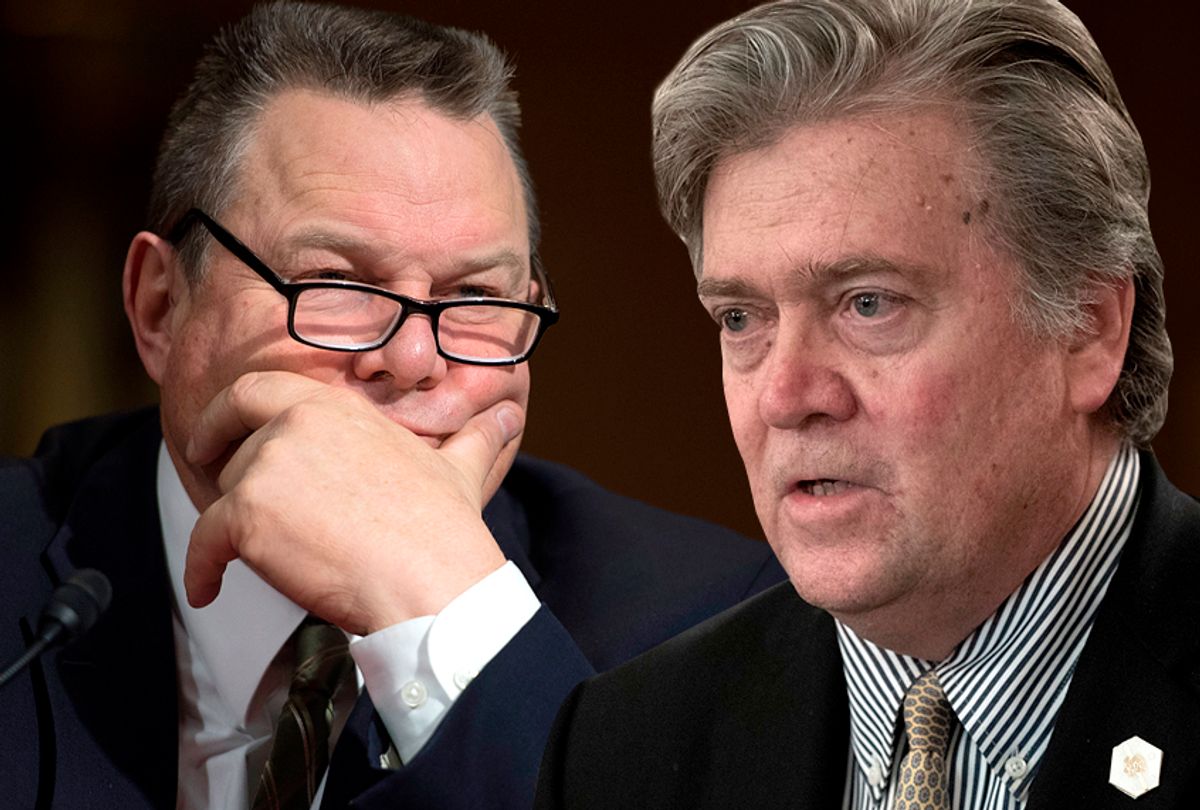 After Democrats scored an unlikely victory by electing Doug Jones to the Senate from Alabama, the Republican hold on the upper chamber of Congress is now up for grabs in 2018.

Originally, next year was supposed to be a tough one in electoral terms for Senate Democrats: Of the 34 seats up for grabs in the 2018 midterms, 24 are held by Democratic incumbents (and 10 of those are in states won by Donald Trump in last year's presidential election).

But while the map means Republicans have to defend far fewer seats, they’re also facing long-term historical trends: Whichever party holds the White House almost invariably finds it harder to get supporters to show up in the first off-year election. Given Trump’s record-low approval ratings since he assumed office in January, the task of motivating Republicans to the polls in 2018 may be even more difficult than usual.

Democrats’ chances have been further helped by the fact that several Republican Senate candidates are expected to face tough primary opponents, some fueled by Steve Bannon's fund-raising ability and purported "populist" appeal. At the very least, that's likely to force them to toward unpopular policy positions in the hopes of satisfying conservative activists.

While far-right candidates typically do not make it out of Republican primary races, that's not always true. In Alabama, the party-approved temporary incumbent, Luther Strange, was unable to defeat Christian radical Roy Moore, who was defeated by Jones in the Dec. 12 special election.

Republican leaders like Sen. Mitch McConnell have tried to use Moore’s defeat as evidence that far-right candidates can’t win general elections and that Bannon, the Breitbart News chairman, should not be viewed as a Republican master strategist.

“The political genius on display, throwing away a seat in the reddest state in America, is hard to ignore,” McConnell sarcastically said last week when asked whether he blamed Bannon for the GOP losing a Senate seat it had held for decades in Alabama.

The constant intra-party feuding, along with the perennial instability of having to deal with Trump’s Twitter feed and controversial or contradictory statements, has also led a number of Republicans to simply give up and head into retirement.

Arizona is the state where all of these trends have come together in the worst way for Republicans. The seat that will be up for grabs in 2018 is currently held by Sen. Jeff Flake, a conventional conservative whose pro-trade and positive outlook on immigration have doomed him with the GOP base (as have his frequent clashes with Trump). Instead of trying to fight his way through a primary, he decided to not to run for re-election.

It’s an open race to replace Flake on the GOP side. Right now, the party favorite seems to be Rep. Martha McSally, from the Tucson area. Her approach of consistently supporting Trump and the congressional GOP’s agenda while trying to avoid defending some of his more controversial actions and statements has impressed Republicans in D.C. But it’s clearly angered the network of highly paid activists who have spent decades telling their followers that anyone liked by Republican leaders should never be elected.

Far-right Republicans will likely put forward Kelli Ward, a gaffe-prone former state senator who has become known for holding hearings examining whether “chemtrails” from jets were being used to poison Americans (an issue favored by Alex Jones and other conspiracy theorists). Grand Canyon State Republicans are holding out hope that a compromise candidate may emerge but thus far, no one has been willing to step forward and face Rep. Kyrsten Sinema, the likely Democratic nominee.

A similar dynamic seems to be at work in Democratic-leaning Nevada, where incumbent Republican Sen. Dean Heller is trying to get a second term after winning with just 46 percent of the vote in 2012.

Instead of playing toward the political center as Maine Sen. Susan Collins has done, Heller has instead stuck closely to Trump in the hopes of fending off a far-right primary challenge. While Nevada increasingly votes Democratic in general elections, anti-government Republicans have shown an ability to get their picks nominated in party primaries.

Heller’s biggest intra-GOP threat is likely to be Danny Tarkanian, a perennial failed candidate who also happens to be the son of longtime UNLV basketball coach Jerry Tarkanian, a legendary figure in the Silver State. The younger Tarkanian declared his candidacy in August and has been endorsed by Bannon and former Republican vice presidential nominee Sarah Palin. There has not been a recent public poll for the race but an October survey found Tarkanian leading Heller 44 to 38 percent, with a hefty 17 percent undecided. On the Democratic side, Rep. Jacky Rosen looks like she will face no serious competition.

Another state where Democrats may be able to pick up an upper chamber seat is Tennessee, after Senate Foreign Relations Committee chair Bob Corker decided he'd had enough Trump. Tennessee is heavily Republican but Democrats appear likely to nominate former Gov. Phil Bredesen, one of the few party leaders who remains popular in the Volunteer State.

Bannon and his far-right colleagues are also likely to make trouble for the GOP in Mississippi, where the party may end up having to host two separate primaries. The Magnolia State was already scheduled to hold one next year for the office currently filled by Sen. Roger Wicker but it may need another one if Sen. Thad Cochran ends up resigning in January due to poor health, as is widely expected on Capitol Hill. That scenario would surely empower state Sen. Chris McDaniel, the man who lost to Cochran in a bitterly contested 2014 primary which, like Alabama’s recent election, involved higher-than-usual black turnout along with revelations that McDaniel had spoken at a neo-Confederate event.

The Civil War is likely to become an issue in Virginia where Corey Stewart, the former gubernatorial candidate who based his entire campaign on protecting Confederate war memorials and openly used “alt-right” terms on the trail, plans to run for the Republican Senate nomination. He’s not likely to win against incumbent Democrat Tim Kaine in the increasingly blue state, but a Stewart candidacy would surely cause more headaches for Republican operatives.

While the president’s party typically does worse in midterm elections, there are still states where Republicans hope to pick up seats. Party leaders have long made Missouri Sen. Claire McCaskill a target, but she was greatly helped during her 2012 re-election bid when she faced off against Todd Akin, a Christian nationalist whose extreme views and lack of a verbal filter cost him the race. Once a swing state, Missouri has become reliably Republican at the presidential level and the GOP appears to be uniting behind state Attorney General Josh Hawley, who may have finessed support from both McConnell and Bannon. There have been no recent opinion polls for a general election match-up since mid-October but Hawley has led in every one of them.

Democrats are also vulnerable in Indiana, where incumbent Sen. Joe Donnelly is trying for a second term after winning his first with just 50 percent of the vote. Like McCaskill, he benefited in 2012 from running against a Christian nationalist, Richard Mourdock, who destroyed his chances in the heavily Republican state by claiming in the 2012 race that pregnancies resulting from rape were “something that God intended to happen.” Unlike in Missouri, however, Republicans are still deeply divided. At this writing, the primary race is degenerating into a personal feud between Rep. Todd Rokita and Rep. Luke Messer, raising the possibility that whoever emerges as the nominee may be too badly damaged to take down Donnelly.

Republicans could potentially gain a pickup in Florida, where longtime Democratic Sen. Bill Nelson may face a challenge from  Gov. Rick Scott, who is being termed out of office. While Scott has never won a majority of the vote in his two gubernatorial campaigns, his vast wealth makes him a formidable opponent.

The GOP would also like to pick up seats in the upper Midwestern states of Montana and North Dakota, where incumbent Democratic Sens. Jon Tester and Heidi Heitkamp, respectively, managed to eke out victories in 2012, probably thanks to increased Democratic base interest during Barack Obama's re-election campaign. Tester won his seat with 48.6 percent of the vote, while Heitkamp won with just over 50 percent.

Both states have long favored Republican presidential candidates by wide margins but so far Republicans have been unable to field any well-known figures to challenge either senator. Things are getting interesting in Montana, where state auditor Matt Rosendale has been endorsed by Bannon but is being attacked from the right by rookie candidate and Afghan war veteran Troy Downing, who has the backing of Lola Zinke, the wife of Interior Secretary Ryan Zinke, who used to be Montana's sole congressman.