Yes, the 2012 GOP nominee has been an outspoken Trump critic, and may well be heading to D.C. But his day is done 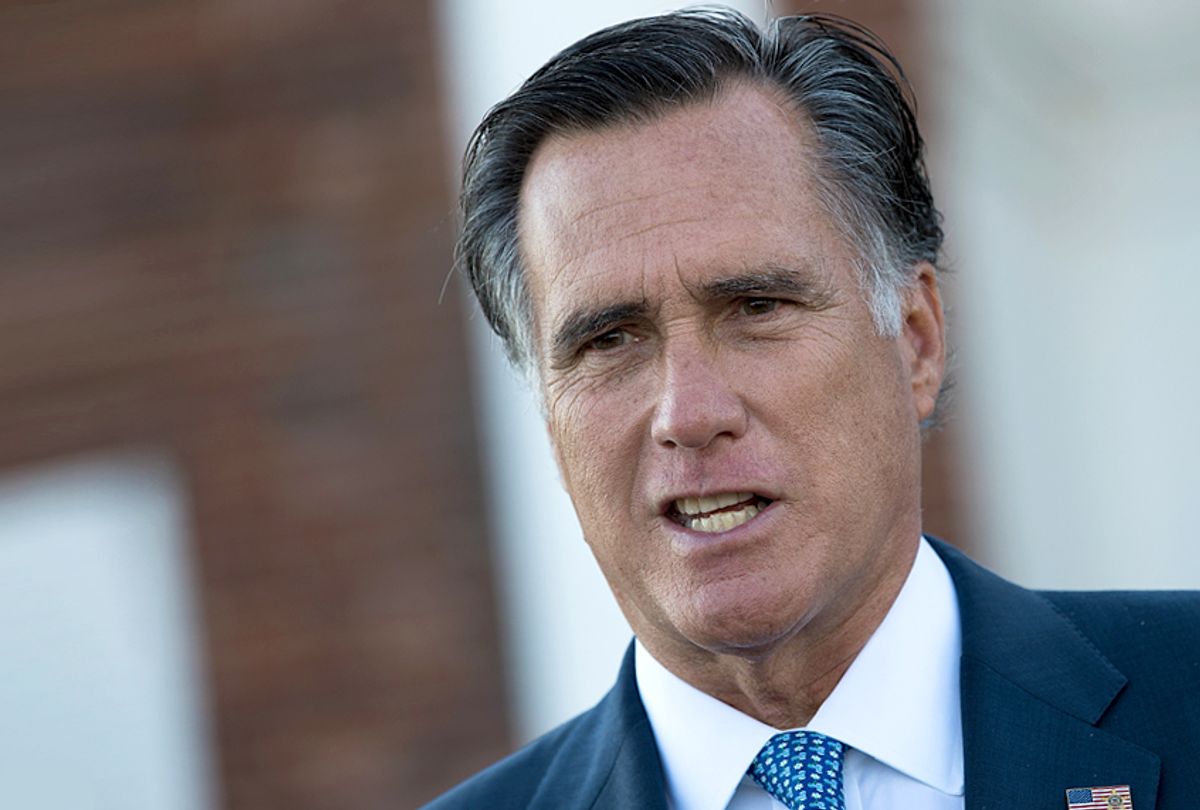 Republican politics are in disarray again. This time, President Donald Trump is for once not responsible. Instead, it’s Sen. Orrin Hatch of Utah, who announced on Tuesday that he will not seek re-election this year, setting off widespread speculation about what will happen next.

Hatch’s announcement came as a surprise, even though he had told Utah voters six years ago that he would not run again in 2018. Trump had been urging him to reconsider, largely because Hatch has become a reliable ally for the president in the Senate, particularly in his position as chair of the Finance Committee, one of several in Congress that played important roles in passing the GOP’s successful overhaul of the tax code.

On Twitter, the president was gracious to the retiring Utahn, praising Hatch’s “absolutely incredible career” and hailing him for being a “tremendous supporter” who said “beyond kind” things about Trump.

Hatch’s retirement news immediately set off speculation that 2012 Republican presidential nominee Mitt Romney would seek to replace him in the Senate. The former Massachusetts governor lent credence to the idea on Tuesday evening, when he changed his Twitter location to Utah. Romney has primarily lived in Utah since 2013, but until now his social media profile has listed him as still living in Boston.

Should he decide to run, Romney would be heavily favored to win. A cross-partisan poll conducted last October by the Salt Lake Tribune found that 44 percent of Utahns would vote for him. The only other person who received double-digit support was Salt Lake County Councilwoman Jenny Wilson, a Democrat. She had only 15 percent.

Many Utah Republican elected officials are encouraging Romney to run, including Gov. Gary Herbert, who told the Tribune that having Romney in the Senate would be “a good thing for Utah” since “he will not start at square one like most freshman senators.”

A Senate seat would also likely be a tremendous boost to Romney’s political ego. In the 2014 Netflix documentary “Mitt,” he told an interviewer that he was destined to be regarded as a “loser for life” after he was defeated by Barack Obama in a race many expected Romney to win.

Not every Republican nationwide is enthusiastic about a Romney Senate candidacy. Former GOP Rep. Joe Walsh, a onetime Tea Party favorite, lambasted the idea on Twitter.

“Somebody in Utah better step up and stop this Senate seat from being handed to @MittRomney, or I’m going to move to Utah and challenge the feckless, elitist Mitt Romney myself,” he wrote.

Walsh’s challenge reflects the lingering bitterness of the GOP’s 2016 presidential campaign, which Trump won decisively, despite objections from many top Republicans, including Romney, that he was unfit for the office. In characteristic fashion, Trump had returned the favor, saying that Romney was a “mixed up man” who had “choked like a dog” in 2012.

Since Trump’s election, however, Romney has dialed back his attacks on Trump. He even had a private dinner with the president to discuss the idea of becoming secretary of state. Trump likewise has not publicly bad-mouthed Romney all year, going so far as to call him a “good man” during a December appearance in the Beehive State.

Despite the seeming rapprochement between the two men, Romney has been willing to criticize the president. In August, he strongly condemned Trump for defending the large-scale protest in Charlottesville, Virginia, that was organized by racists and neo-Nazis.

“What he communicated caused racists to rejoice, minorities to weep, and the vast heart of America to mourn,” Romney wrote in a Facebook post.

Even if Romney were elected and felt free enough to publicly differ with Trump, there is no guarantee that he would do so on policy grounds. Thus far, most conservatives who have publicly disparaged the president have primarily complained about his personal conduct. That’s because despite Trump’s campaign-trail rhetoric against “globalists,” “bankers” and the "Republican establishment,” his policy agenda (save for his treatment of Muslims and the Islamic world) has been almost indistinguishable from a conventional GOP politician's.

Romney’s fellow Mormon Republican, Sen. Jeff Flake of Arizona, has been a great example of this trend. Despite Flake’s semi-frequent denunciations of Trump for his routine violations of political decorum, the Arizonan has never joined Democrats on important bills, such as on recent tax overhaul legislation or the GOP’s earlier efforts to repeal the Affordable Care Act. According to the political data website FiveThirtyEight, Flake has voted Trump’s way more than 90 percent of the time.

While Romney would certainly have considerable freedom to criticize Trump, given his popularity within Utah, there is no indication that denouncing the president in the Senate would be all that meaningful. Romney’s earlier attacks on Trump were utterly ineffectual, and most Republicans nationwide still strongly back the president. Thus, even if a future Sen. Romney were to regularly condemn Trump, his remarks would not likely mean much to Republicans in other states.

So while Mitt Romney in the Senate might not change Republican politics that much, Romney's potential candidacy will definitely attract the attention of some of Trump’s more devoted supporters. Steve Bannon, the Breitbart News chairman and former presidential strategist, has already proven he is willing to cause trouble within the GOP against Trump’s best interests. Bannon heavily promoted Roy Moore, the failed Alabama U.S. Senate candidate who attracted international attention for his extreme viewpoints and accusations that he had preyed on teenage girls in the 1970s.

Bannon has vowed to fund and promote candidates against every incumbent Republican senator running for re-election this year. He had not announced any endorsement for a challenger to Hatch before Tuesday, and the Breitbart website did not promote any alternatives throughout the day, either.

If he were to run, Romney would certainly have a strong base of support -- and Utah may be an even more reliably Republican state than Alabama. But long-established GOP names in Utah have not been electorally immune. The state’s other senator, Mike Lee, won his office by defeating veteran Republican incumbent Bob Bennett in a 2010 primary race.