Did Dave Chappelle go too far?

The outcry over his Netflix special's #MeToo blunder is deserved. But it shouldn't erase risks that pay off 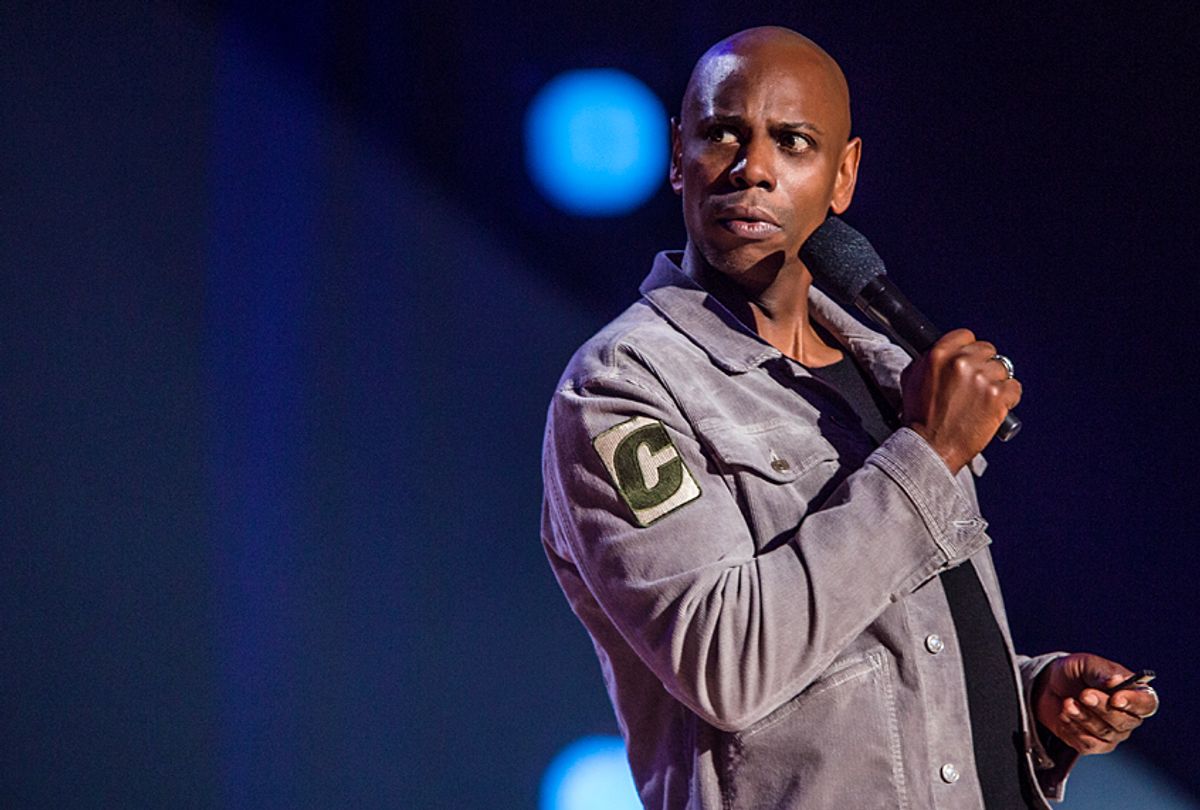 Last year, Dave Chappelle signed a $60 million comedy deal with Netflix. His first two specials, "Age of Spin" and "Deep in the Heart of Texas," debuted in March to mixed reviews from critics. Admittedly I jumped the gun, calling him a genius after watching the first two. Now, I have to admit that Dave appeared rusty back in the spring. He had been out of the game for a long time, and used some language that offended a lot of his fans, especially in dealing with LGBTQAI culture.

But I didn’t realize how off the first two Chappelle specials were until he dropped “The Bird Revelation” and "Equanimity” on New Year’s Eve. Now I can say with all of my heart that Chappelle is truly back. The first two specials felt like when Michael Jordan returned to the NBA in 1995, wearing number 45 — rusty, but still showing glimpses of greatness. Then Jordan switched back to 23 and became bigger than he was when he left. There was something incomplete about Jordan in that 45 jersey­ ­— his timing was off, the game had changed, and he needed to recalibrate and adjust his approach. Chappelle readjusted by going back to his vintage formula: a cocktail of slapstick, history and masterful storytelling blended into an effort to land the perfect joke.

One can argue that in that pursuit, Chappelle has made a habit out of crossing lines — to both acclaim and outrage. This time around, he acknowledges the criticism of jokes he made about transgender people but rejects responsibility for fans interpreting them as permission to hate. "If I’m on stage and I tell a joke that makes you want to beat up a transgender, than you are a piece of shit and don’t come to see me.”

In "The Bird Revelation," he wastes no time walking up to the line, first by boasting that he’s so good at telling jokes that he gets to the punchline first: “And so I kicked her in the pussy.” That's a punchline that would offend anyone, especially anyone sensitive to jokes about violence toward women. The crowd was so shocked they could do nothing but laugh. Chappelle then takes the audience on a journey back to the punchline. He pivots to how people think he’s from the projects, but he’s really not; he envied poor kids growing up because they shared a common ground­. Chappelle’s family, he says, had just enough money to be broke around white people. He tells the story of the first time he was invited to eat dinner at a white friend’s house. He didn’t want to go, because he'd been taught that white people can't cook. His friend tells him that his mom was making Stove Top Stuffing,  a product all kids knew from TV commercials. So he gets excited about eating white-people dinner, until his friend’s mom says that she didn’t know he was going to stay over, and there wasn’t going to be enough food for him­­. So he . . . “kicked her in the pussy.”

Yes, it's a shocking line, and no, he's not advocating for women to literally be kicked in the genitals — he's on his way to making an unexpected connection.

When Chappelle asks the crowd, “how many of you guys are not originally from America?” he's not changing the subject. He launches into the story of Emmett Till, a 14-year-old black boy from Chicago who was visiting family in Mississippi in the summer of 1955, when he allegedly whistled at a white woman. A few days later, a group of white men, including the woman's husband, broke into his family’s house, beat Till to death and threw his body in the river. Three days later Till's body was discovered, bloated and mutilated beyond recognition­­.

Chappelle's audience falls silent; at that moment, it doesn't feel like a comedy show. But he presses on, explaining that Till’s mother, Mamie Till Bradley, made the decision to leave her son's casket open for the world to see what had been done to him. Photos of Emmett Till in his coffin helped the Civil Rights movement gather nationwide momentum.

Then Chappelle turns to the subject of Carolyn Bryant, the woman whose accusation that Till had flirted with her had caused her husband and his friends to kidnap, torture and murder the young boy (crimes for which they were acquitted, but to which they then later admitted). Last year, a 2007 interview surfaced (included in Timothy Tyson's book "The Blood of Emmett Till") in which Bryant admitted that she had lied about Till's actions. Her lie led to a grisly murder which inadvertently fueled a movement that eventually brought us closer together than we ever have been. Chappelle says he feels something similar is happening in America right now, that he never feels more American than he does when we all get together and collectively hate on Trump. So he says he forgives Carolyn Bryant, because he sees the bigger picture. If she was at the show, however — and here Chappelle lands his punchline again.

The magic lies in his ability to use an offensive phrase like "kick her in the pussy" to get a laugh from the crowd about the difficulty of being being black in white spaces, and then connect it to an even more complex and dangerous related issue — a racist white woman lying to or about a black boy and expecting to be believed, and how the deadly implications for black boys and men of this larger historical pattern. He's tricking his audience into seeing how America really operates, and the shock of the punchline is just one tool he uses.

“Louis was like the turning point," Chappelle says. "All these allegations were terrible — I shouldn’t say this — but his allegations were the only ones that made me laugh. When you think about it, he’s jerking off — he’s surprising people."

“I picture all the comics in comedy reading it like, ‘Word!’ It’s terrible, I’m sorry ladies, you’re right. At the same time, Jesus Christ, they took everything from Louis," he says. "It might be disproportionate, I can’t tell, I can't tell."

Chappelle then addresses the women Louis harassed with comments that have been widely criticized. “Show business is just harder than that. Them women sounded like, I hate to say it, they sounded weak. I know it sounds fucked up and I’m not supposed to say that, but one of these ladies was like, ‘Louis C.K. was masturbating while I was on the phone with him.’ Bitch, you don’t know how to hang up the phone? How the hell are you going to survive in show business if this is an actual obstacle to your dreams? I know Louis is wrong, I’m just saying, I’m held to a higher standard of accountability than these women are.”

To those who are angered by some or all of those lines, I would point out that he also calls these men wrong over and over again, between every punchline. I'd never belittle or discredit anyone's struggle or victories, but he is right to say that firing some abusive executives like Harvey Weinstein will not change the fundamental problem of misogyny in America — just like getting rid of a few rogue cops won’t stop police brutality.

Let's not forget that this is a man who walked away from $50 million and a successful TV show because of the racism he encountered in Hollywood. Now he's back, and I hope women who might have backed away from comedy projects because of Louis CK's abusive behavior will also return, and be welcomed back. How can we change these systems if we aren't connected to the culture?

Many people crying foul on this bit don't seem to have a problem with how he makes fun of African-American men, including President Barack Obama, Katt Williams, Kevin Hart, O.J. Simpson, and his own son. Critics and activists often pick and choose what they want to be mad about. If we are going to fight for one group, why not fight for them all? Chappelle is a member of a grossly oppressed group in this country which he mercilessly mocks every time a camera is in his face. I’m a black man and he has offended me plenty of times; however, I accept that those jokes are part of his larger body of work challenging society as a whole, and they often help me see things from another perspective.

Chappelle is a part of a strong tradition of black comedy that birthed guys like Dick Gregory, Richard Pryor and Paul Mooney – the harshest truth-tellers in history. It's a style that stems directly from the poorest black communities in America. Nobody is safe. Even your grandma can get railed on — and you better be careful, because her comebacks can make you cry. Humor, church and storytelling have numbed the pain of oppression for generations of black people in America, and if you've spent time in one of those environments, you'll get it.