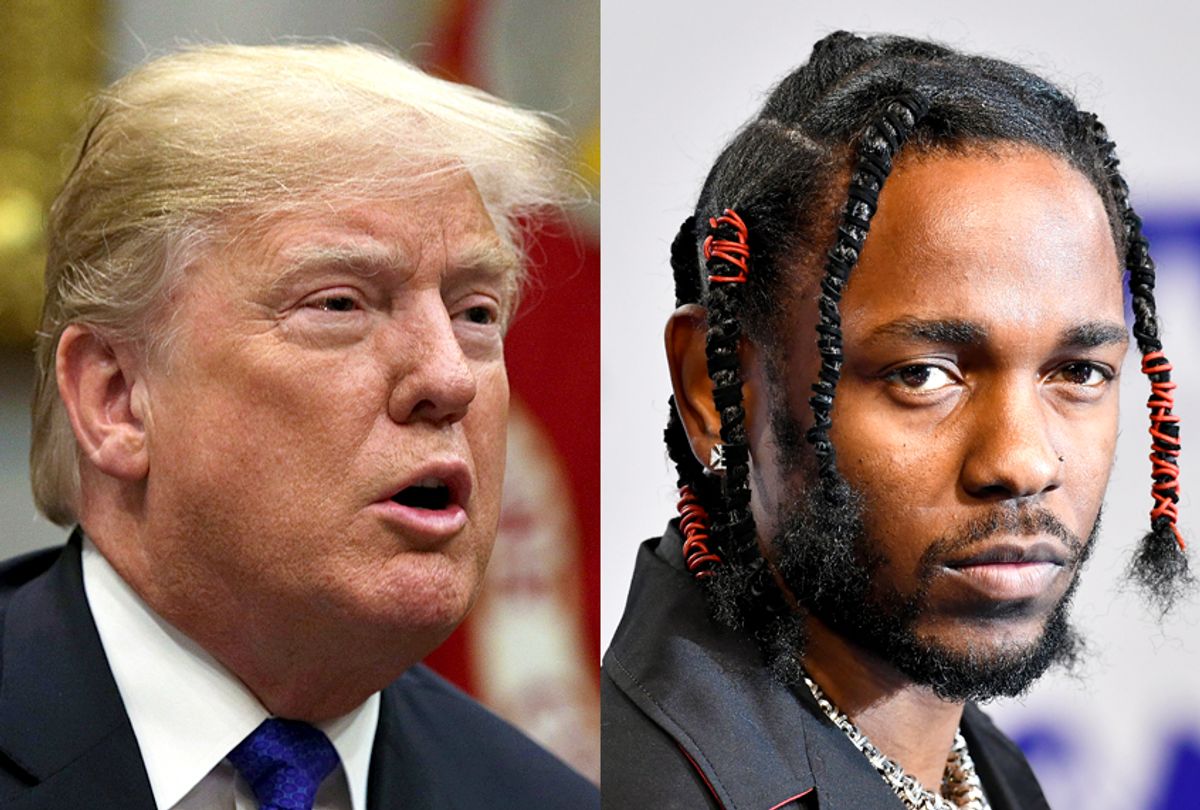 President Donald Trump may soon witness his first Kendrick Lamar concert, as he is slated to attend the 2018 College Football Playoff National Championship game in Atlanta Monday night, where the University of Georgia will face off against the University of Alabama.

It just so happens that the brilliant, politically active Compton rapper Lamar will be headlining the game's halftime show. While Barack Obama was an avid Lamar fan, it's likely Trump would not enjoy the performer's very direct, very clear political allegiances, support for the Black Lives Matter movement and his work in many fields in direct opposition to the president's policies.

As for what the rapper feels about Trump, on "The Heart Part 4," released in March 2017, Lamar rhymes:

Donald Trump is a chump
Know how we feel, punk? Tell 'em that God comin'
And Russia need a replay button, y'all up to somethin'
Electorial votes look like memorial votes
But America's truth ain't ignorin' the votes

White House Press Secretary Sarah Huckabee Sanders seemed to confirm that Trump's decision to attend the game wasn't because the president just wanted to wait to hear Lamar perform selections from most recent album "DAMN." live and in person. In her briefing on Tuesday, she instead described the game as a point of interest because it features "two great teams from two great states, both in the heart of Trump country."

While Trump and Sanders may have it in their minds that Georgia and Alabama are home to vast numbers Trump of supporters, it's a bit more complicated than that. Trump did indeed win the two states during the 2016 presidential election, but "Clarke County, Georgia, home to the UGA, went for Hillary Clinton in 2016 by a nearly 40 percent margin," New York Magazine reported, and voters in Alabama recently rejected both of Trump's picks in the special election to fill Attorney General Jeff Sessions' vacant seat in the Senate.

As well, Trump may have taken the state of Georgia by a decisive 5.2 percent margin in the 2016 election, but the championship game host city of Atlanta went for Hillary Clinton by a whooping 33 percent.

And there's no love lost on the other side. Less than a week before his inauguration, Trump tweeted that "Congressman John Lewis should spend more time on fixing and helping his district, which is in horrible shape and falling apart (not to. . . mention crime infested )."

Likely, Lamar isn't fazed by the commander in chief's planned presence. After all, he just revealed that he produced and curated the soundtrack for the upcoming film "Black Panther." In a press release, he said, "Marvel Studios’ Black Panther is amazing, from its cast to its director. The magnitude of this film showcases a great marriage of art and culture. I’m truly honored to contribute my knowledge of producing sound and writing music alongside Ryan and Marvel’s vision."

How or if Trump's attendance will conflict with his already scheduled "THE MOST DISHONEST & CORRUPT MEDIA AWARDS OF THE YEAR" at 5 p.m. the same day remains to be seen.