Republicans now control Virginia's House of Delegates, thanks to a random drawing 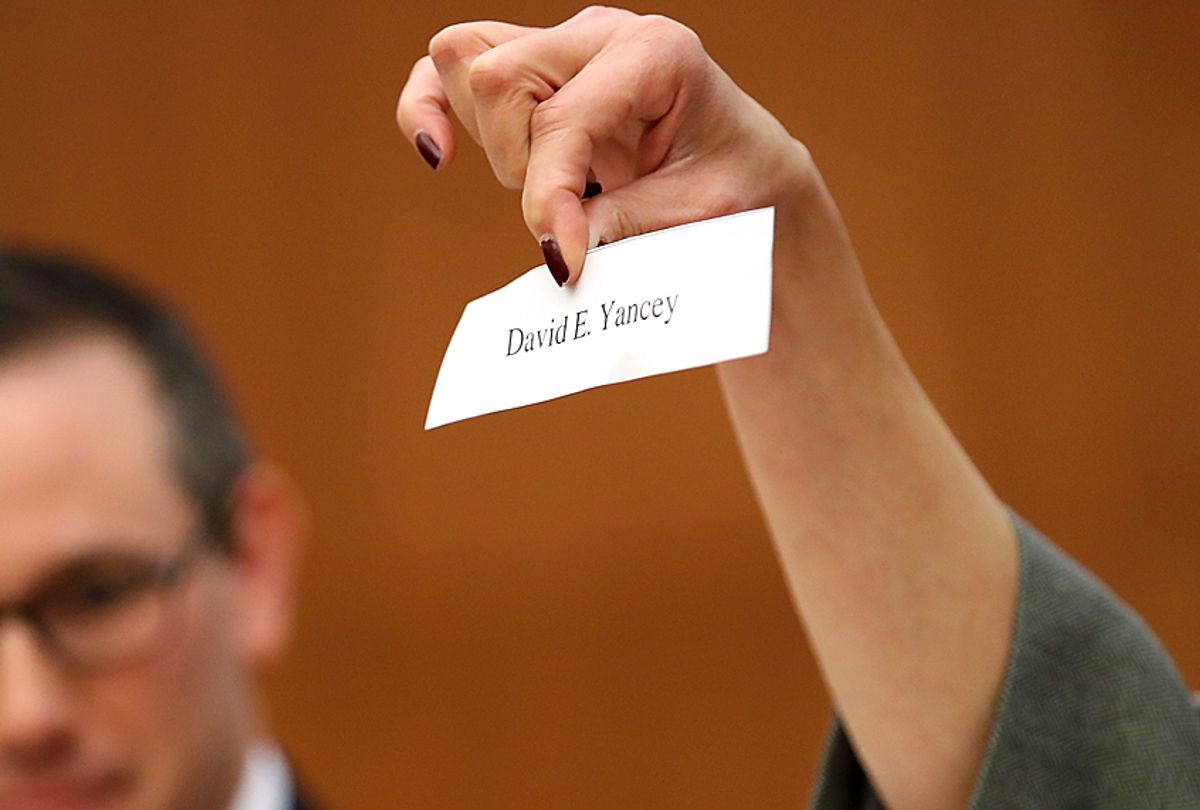 A slip of paper with the name of Virginia House of Delegates candidate David Yancey, the winner of a drawing to determine the winner of a tied election (Getty/Win McNamee)
--

The Virginia House of Delegates will remain under Republican control, thanks to a lot drawing that threw a tied race into the hands of that district's GOP candidate.

David Yancey was declared the winner over Shelly Simonds on Thursday, after a Virginia elections official pulled his name from a stoneware bowl, according to The Washington Post. Although Simonds was officially declared the loser of the election as a result of the drawing, she still has a legal right to demand a recount and admitted that "all options are on the table."

Yancey's victory through lot drawing was the culmination of a convoluted legal process surrounding the House race in Newport News. Although Yancey was initially believed to have won the race by 10 votes, a recount performed on Dec. 19 declared that Simonds had won by a single vote. One day later, a recount court decided that one ballot for Yancey — which had been invalidated — should be counted, creating a tie between the two candidates at 11,608 votes. They decided that, even though the ballot had been disregarded because bubbles were filled in for both Simonds and Yancey, the fact that the bubble next to Simonds' name had been slashed out indicated that the voter had intended to vote for Yancey.

Simonds requested that the recount court reconsider its decision, but on Wednesday evening they declined to do so, resulting in the Thursday drawing.

The race between Yancey and Simonds holds considerable significance in the current Virginia political climate. After Democrats swept Virginia state races from the governorship down to local offices, the possibility emerged that Republicans could lose control of the state legislature that they had previously led with a nearly two-thirds majority, according to NPR. Without the outcome of the Yancey-Simonds race, Republicans had a narrow 50 to 49 lead. If Simonds had won, that would have resulted in a 50-50 split, giving Democrats leverage in deciding committee leadership positions and helping the newly-elected governor Ralph Northam implement his agenda.

As things stand, the likelihood is that Republicans will enter the new session with a 50-49 lead instead of 51-49, since it is unlikely that Yancey will be seated as long as Simonds continues to contest the outcome.