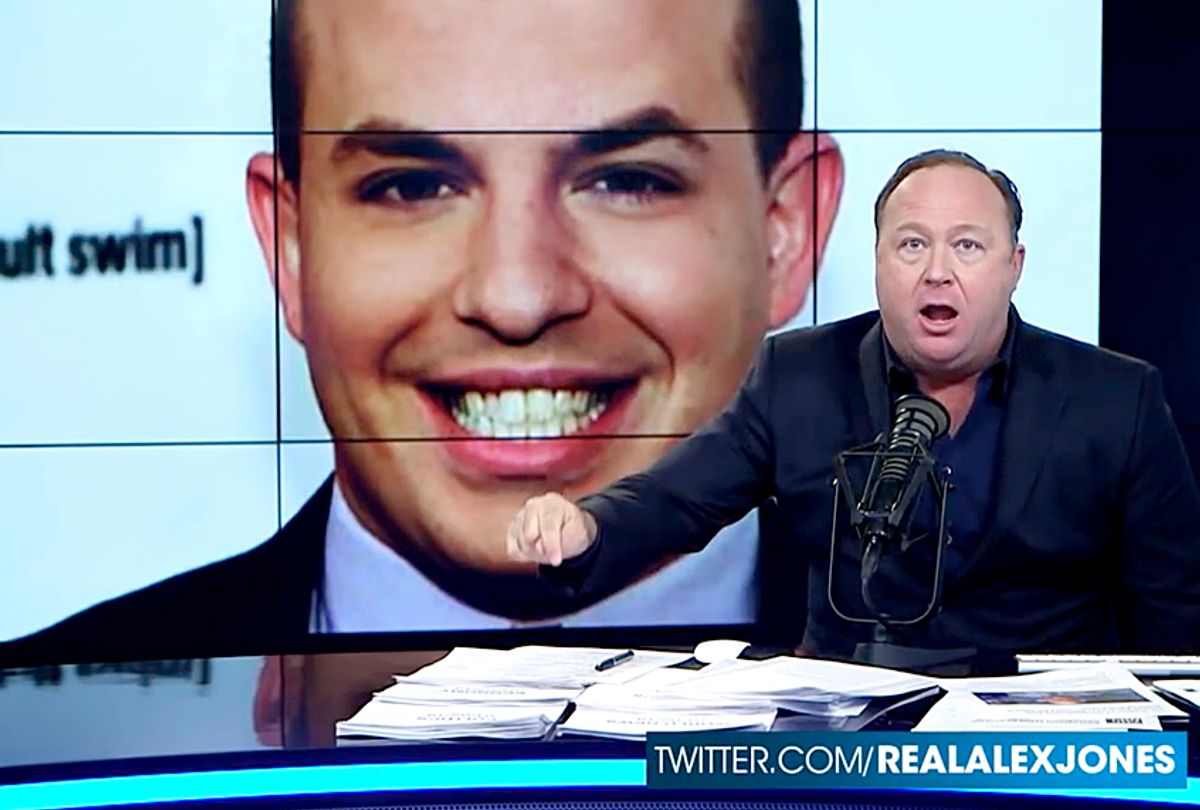 Brian Stelter, media critic and host of CNN's "Reliable Sources," is pretty much what one would think a media critic for CNN would be like: Somewhat smarmy, regularly insightful, periodically haughty, but primarily buttoned-down. He's not milquetoast, but it's easy to imagine that without his role at "The Most Trusted Name in News" and perhaps transported a professor's seat at a Midwestern university, he would be. Even when he launches into President Donald Trump, it's not with fire and lightning. There is, really, nothing wrong with that.

For the ever-entertaining, often frightening and sweaty Alex Jones, however, he's a shadowy Judas with broad powers over the financial and educational systems in this country, a force of evil rarely seen, creeping its way across the surface of the Earth.

"He wants to run your life," Jones said of Stelter Friday. "He wants to control every aspect of your life because he knows he is a cowardly degenerate sack of anti-human trash."

Jones continued, "He runs your kids, he runs the schools, he runs the banks. This guy, this spirit, this smiling, leering devil that thinks you can’t see what he is. He is your enemy. Period."

He also called the "narcissistic devil-worshiping filth" who graduated with a B.A. in communications from Towson University, "disingenuous, fake, false, broke-back, twisted, a defiler, a betrayer, a back stabber, a devil."

He added that Stelter and his ilk are, "drunk on our children's blood."

Manic and breathless, this particular Jonesean rant is not only notable for its sheer volume and fury but for the fact that he has reserved what is instantly one of his top-10 angriest segments for someone who is really just a kind of normal dude who happens to comment on right-wing media and right-wing politics from a very visible perch (again, not an insult to Stelter).

Recently, Stelter has been reporting on, and breathlessly tweeting about, the publication of Michael Wolff's Trump administration exposé "Fire and Fury" (available today on Amazon and wherever e-books are sold). Perhaps this is why Jones has trained his sights on the critic.

Alleged quotes from Trump insiders that appear in the book have already had Jones spinning in circles, gnashing his teeth at the media and attacking former compatriot in odd, apocalyptic thought, Steve Bannon (Roger Stone has been helping him with that). This is on top of his usual programming of warning about the undocumented Jihadists in our midst and selling supplements.

What's interesting is that as more and more is uncovered about the inherent instability of the current administration, the anti-government, pro-Trump Jones seems more and more sloppy in his targets, less and less pointed toward the general conspiracy field of aliens and fluoridated water, ever more a Trump shill.

In attacking Stelter as a "literal demon spawn," one has to wonder if his audience remains the same clique of counterculture apocalypse lovers it was just a couple of years ago, if there has been some sort of transition to a more cohesively partisan, Beltway-focused viewership. You also have to wonder if Jones, who used to have a constant supply of fringe followers from across the political spectrum, has tied his fate so completely to this president that the host's future and that of Trump's have become one and the same. More popular than ever, it's beginning to seem as if Jones is also in more jeopardy than at any time in his career, a mad rat on a listing ship.