GOP's shameless new plan: Bulldoze Sessions in order to get rid of Mueller

In the wake of Michael Wolff's sleazy revelations, Republicans won't give an inch — and they're getting desperate 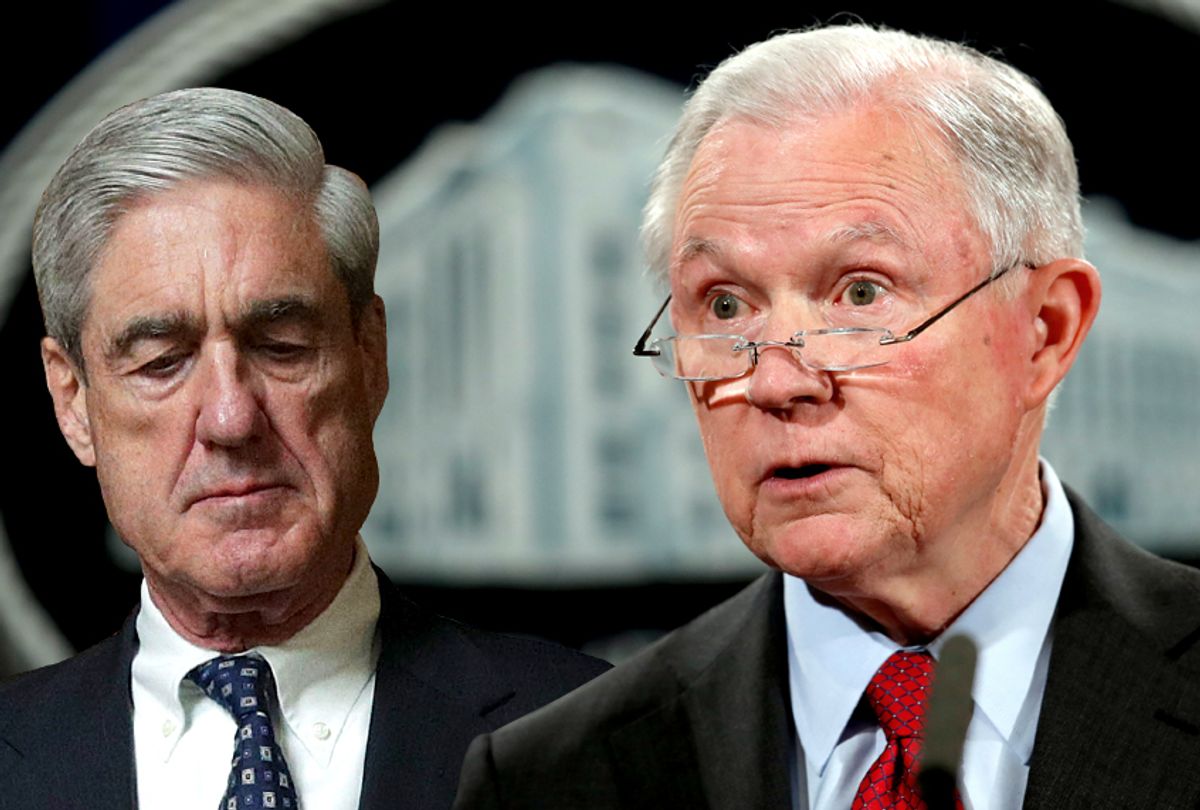 Dozens of columns about Michael Wolff's new book "Fire and Fury" have already been published and we can expect many more to come. It's a fascinating look into TrumpWorld, and anyone who's been following the saga over the past couple of years cannot help but devour all the juicy details. Even if only half of it were true (and evidently Wolff has tapes and witnesses to back up many of the conversations he relates), it's still a gripping story.

But none of this is really a shock, is it? After all, we have the evidence of unfitness right before our eyes whenever Trump speaks or tweets or gives interviews to the newspapers. Plenty of leaks and gossip from the White House has made its way into the media over the past year. Tens of millions of people in this country have been watching this debacle unfold before our eyes since June of 2015, seeing very clearly who Donald Trump is. Nothing in Wolff's book changes what we already knew.

Still, as James Fallows points out in this insightful piece for the Atlantic, Wolff's colorful details about Trump's childish behavior and incompetence, along with on-the-record comments from insiders, takes this to a new level that can be compared to the gusher of information after the dam burst on sexual harassment in entertainment and media. Once people came forward, it became clear that the behavior of Harvey Weinstein and other powerful men was an open secret in their respective communities. At that point, the question became why other people in power didn't do anything about it or, in many cases, why they actually covered up the crimes with payoffs and threats.

That's a reckoning we have yet to see happen with Donald Trump. In fact, the people in power, the Republicans, appear to be circling the wagons tighter around Trump by the day, even as reports filter out from members of the press that they are well aware of Trump's unfitness for the job. Consider this piece by David Brooks in the New York Times from a couple of months ago, describing Republican senators giving Trump a standing ovation, even though they saw a president "so repetitive and rambling, some thought he might be suffering from early Alzheimer's."

Republicans have embraced conservative activist Grover Norquist's maxim that in order to achieve their dreams, the GOP could "pick a Republican with enough working digits to handle a pen to become president of the United States." Elected officials of that party have abdicated their duty as surely as the board of Fox News or the Weinstein Company abdicated theirs. Since the duty of duly elected members of Congress is to protect the entire country and assure the survival of our planet in the nuclear age, the stakes are substantially higher.

Nevertheless, Republicans persist in protecting a man they all know to be unfit to lead, and possibly even compromised by a foreign adversary. On Thursday, Rep. Mark Meadows, R-N.C., and Rep. Jim Jordan, R-Ohio, charter members of what was once considered to be the most principled conservative organization in the Congress, the House Freedom Caucus, took to the pages of The Washington Examiner to demand that Attorney General Jeff Sessions resign. Why? Because the Russia investigation must be shut down.

It's seems like an odd request, considering that Sessions is recused from that probe, but Meadows and Jordan suggest that the attorney general is allowing FBI and Department of Justice employees to leak false stories to the media and that unless he's willing to take those agencies in hand, he must step down. They blow a bit of smoke about the details of the George Papadopoulos case relayed to The New York Times last week and pretend that they are concerned about the integrity of the FBI. But since it's an open secret that Trump is still fulminating about Sessions recusing himself from the Russia investigation, it's obvious they are doing the bidding of their unstable leader by keeping the pressure on Sessions. Maybe they hope he'll take some action to rein in Robert Mueller's investigation, despite his recusal. Or maybe they're just trying to make Trump feel better.

On Thursday night, The New York Times published a new bombshell shedding light on that Sessions recusal and various attempts to smear former FBI director James Comey. Trump had asked White House counsel, Don McGahn, to ensure that Sessions didn't take that step despite his promise during Senate confirmation hearings, but DOJ officials had made it clear that Sessions would have to recuse himself. This was the reported response of the man these allegedly principled defenders of the Constitution still support:

Mr. McGahn was unsuccessful, and the president erupted in anger in front of numerous White House officials, saying he needed his attorney general to protect him. Mr. Trump said he had expected his top law enforcement official to safeguard him the way he believed Robert F. Kennedy, as attorney general, had done for his brother John F. Kennedy and Eric H. Holder Jr. had for Barack Obama.

Mr. Trump then asked, “Where’s my Roy Cohn?” He was referring to his former personal lawyer and fixer, who had been Senator Joseph R. McCarthy’s top aide during the investigations into communist activity in the 1950s and died in 1986.

One might be tempted to dismiss such a quote as hyperbole, but just last weekend, Trump said much the same thing about Holder in an interview with the Times. He believes to this day that the attorney general is supposed to be the president's personal protector, and he holds a grudge against Sessions for failing to keep the FBI from investigating his Russia ties.

But no matter what comes out next, the Republican Party is still supporting him. Meadows, Jordan and other members of the Freedom Caucus are even willing to force a "purge" of the Department of Justice to protect him. House Speaker Paul Ryan just backed discredited Trump follower Rep. Devin Nunes, chair of the House Intelligence Committee, in a dispute with the Department of Justice, causing the DOJ to cave.

In some ways, these Republican enablers are more guilty than Donald Trump is. In the wake of the revelations in the Wolff book, there is a lot of talk about Trump being seriously impaired in some way. Wolff writes that "almost every member of the senior staff" in the White House repeatedly described Trump as "like a child." OK then -- but what excuse do congressional Republicans have?