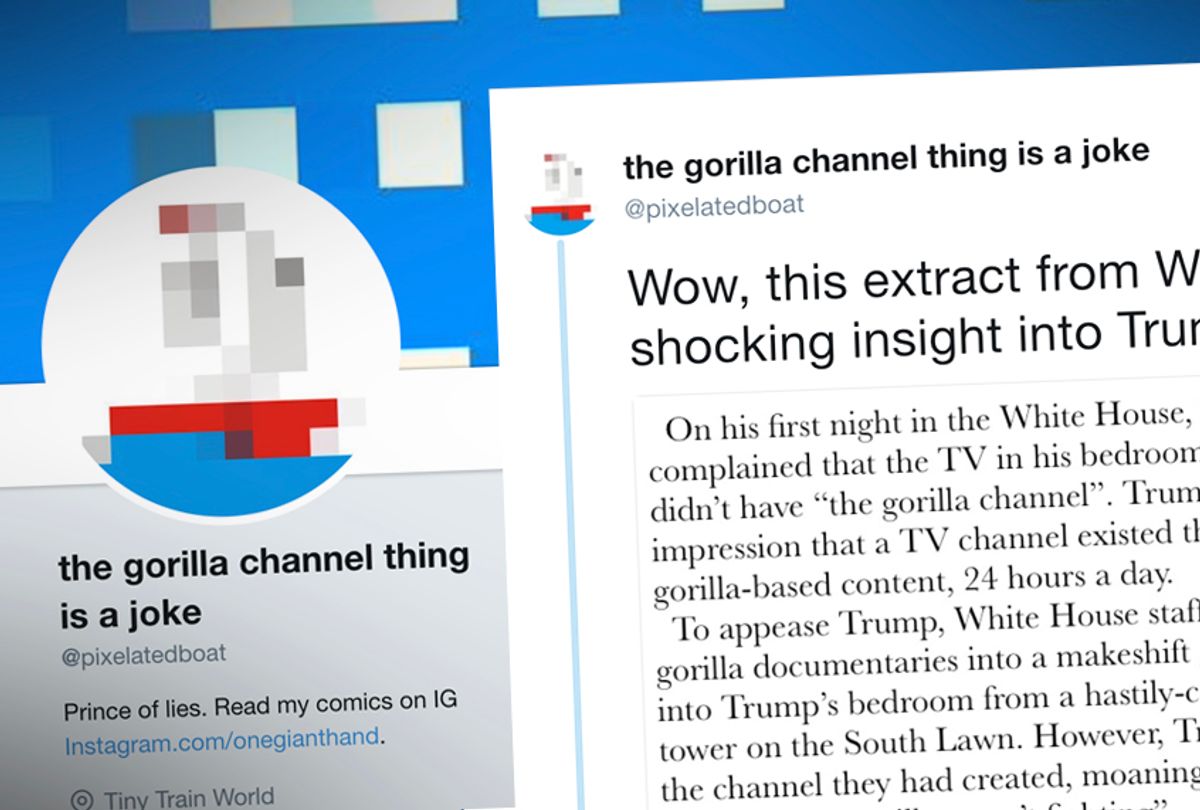 With all the inconceivable Trump administration's absurdities revealed by Michael Wolff's White House just-released exposé "Fire & Fury," it is infuriating, yet almost understandable, that a fictitious passage about Donald Trump watching "the Gorilla Channel" was believed by some to be true.

Beloved Twitter comedian @Pixelatedboat tweeted a Photoshopped passage — purported to be from Wolff's book "Fire & Fury" — that said that President Trump was upset that the television in his bedroom didn't carry a "gorilla channel." In an effort to placate Trump, the White House staff compiled a bunch of documentaries and created an improvised one, the joke passage explained.

The tweet went viral, leading some prominent figures in the Twitterverse—including Farhad Manjoo of the New York Times— to express confusion over its legitimacy.

For some, there was a disappointment when they found out it wasn't—and that a Gorilla channel doesn't really exist.

Cable channel Animal Planet played off the joke themselves.

With some of these tweets from journalists, it is hard to tell whether they were joking about their gullibility. Whatever the case, PixelatedBoat's tweet revealed a disturbing trend — namely, that truth has become highly subjective and distorted, such that even obvious parodies can easily pass as real.

While the Gorilla Channel prank is hilarious, it's also alarming and showcases a bigger contemporary problem: people believe what they want to believe. As Washington Post writer Molly Roberts said, "the same inclination [a]llowed Russian propaganda to spread like a virus through social media leading up to the election." "There’s a volatile chemistry between a president who stirs disbelief each day and critics ready to suspend their own," Roberts mused.

On a lighter note, it's clear that many Americans desperately want a Gorilla Channel — and lucky for those who'd like to see it, Vice News went ahead and created one here.

Meanwhile, @Pixelatedboat has since changed their Twitter account name to "the gorilla channel thing is a joke."