Donald Trump is rooting for Iran's downfall, not for an advancement of human rights 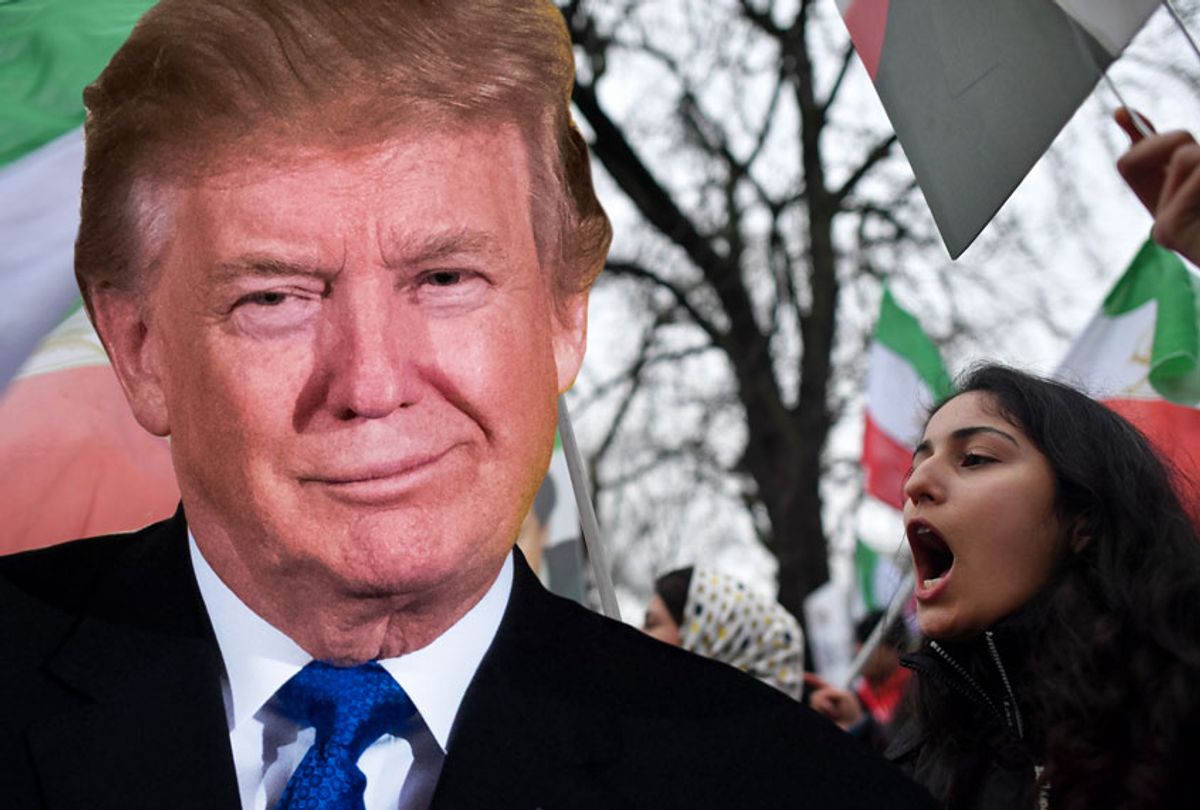 A little more than a week ago, small demonstrations in Mashhad, the second largest city in Iran, laid the groundwork for what quickly became the largest protests the nation has seen since the Green Movement in 2009.

The number of protesters nationwide is still not entirely clear; estimates have run from thousands of people to tens of thousands of people. And the overall size is still substantially smaller than the millions of Iranians who protested nearly a decade ago. Part of it is geography — the protests have been from various areas of the country, including smaller towns. It's so far been a movement carried out largely by the working class and the poor with grievances over the economy and corruption.

As the news of the protests spread through Western media, it found a cheerleader in President Donald Trump, who spent much of his time rooting for the protesters from afar. For an anti-Iranian take, Trump hit all the right notes. But a look at the president's very brief human rights record shows that he hasn't been pushing for an expansion of democracy.

"I find that Trump's sudden interest in the Iranian people's lives is very hypocritical," Holly Dagres, an Iranian-American analyst and author of the weekly newsletter The Iranist, told Salon. She explained that there were "several reasons" Trump's stance just didn't add up. For starters, he has long wanted to prohibit travel from Muslim-majority countries, which was widely criticized as a "Muslim ban."

"You find all these tweets right now coming from President Trump himself, from Mike Pence, from Ivanka Trump and a lot of his other officials, and they're expressing this deep concern with Iran, and speaking about how these Iranian protesters are oppressed under tyranny," Dagres explained. "But if they're so concerned with the tyranny, why are they not letting them flee it in the first place by placing a Muslim ban?

"The irony of this is that Iranians haven't committed a terrorist attack on U.S. soil since 1980."

It's hard for Trump to be angry that internet access has been closed off for Iranians — some restrictions were put in place by the Iranian regime — because U.S. sanctions have stripped Iranian citizens of internet privileges as well.

"I find this interesting because Google and Apple have pulled Iranian-made apps of their markets because of sanctions," Dagres explained. "Iranians do not have access to PayPal, or Amazon, or Adobe and many other online services."

Additionally, Facebook, it was recently reported, deleted accounts of Palestinians at the direction of the Israeli and American governments.

"I think that the Trump administration should practice what it preaches," Dagres said.

Even the most cursory glance at Trump's first year would show where the president really stands when it comes to peaceful protests. Though he cheered on Iranian protesters for speaking up against the government, he has cozied up to authoritarian leaders, including Rodrigo Duterte of the Philippines and Abdel Fattah el-Sisi of Egypt.

In May, Turkish President Recep Tayyip Erdoğan's Washington visit sparked protests, which turned violent when Erdoğan's  bodyguards attacked protesters outside the Turkish embassy. Not only did the White House not denounce the violent acts — then-press secretary Sean Spicer pointed reporters to the State Department instead — but Erdoğan claimed that Trump apologized to him for the violence. (The White House said that Trump did not apologize.)

Were the Trump administration to care about human rights violations, they would be paying attention to Yemen, where the U.S. is directly assisting the Saudi-led air assault on Yemen's Houthi rebels, who have allegedly received some support from Iran. The almost three-year-long war in Yemen, which has now reached its second president and killed more 10,000 civilians, has been dubbed the world's worst humanitarian crisis. The country remains on the brink of starvation as a result of the Saudi blockade, and has suffered the worst cholera outbreak ever to be recorded.

"If you're going to voice your concern about Iran, I think you should easily be voicing your concern about Yemen," Dagres said, adding that the U.S. should also be critical of Saudi Arabia. "But will the Trump administration do that? No, because they're selling weapons to Saudi Arabia, they are very much in an anti-Iran coalition together."

Trump has a vested interest in Saudi Arabia, supporting Mohammed bin Salman, who's now next in line to the kingdom's throne. He is the architect of the war in Yemen.

The conservative applause for Trump's harsh words against Iran is part of a larger pattern of saber-rattling against the country, which has been in the Washington DNA for a very long time. Since the George W. Bush administration — and even further back — pundits have clamored for intervention against the Iranian regime.

"What we need to realize is that the U.S. has a history of meddling in Iranian affairs dating back to the 1953 coup d'etat of [the then-democratically elected Iranian Prime Minister] Mohammed Mossadegh," Dagres explained of the American involvement in the country. She noted that Iranians were generally skeptical of foreign intervention in their country, "whether it be the Russians in the early 20th century, the British and now the Americans — and what they've also been adding now is the Saudis."

Dagres continued, "So when you have a history of meddling in a country's affairs, the U.S. government isn't really in a position to say what's good or bad for the Iranian people, especially since the Iranian people are very weary of it."

Concerns arising from the Trump administration, however, are "very disingenuous," she said. "I think that the U.S. should stay out of it, but will the U.S. listen? Will they listen to history and understand culture, and history of the Iranian people — and understand their concern about it? I doubt it."

For decades, the U.S. has repeatedly aligned itself with dictators and repressive regimes that have helped advance national interests. The U.S. has helped overthrow those that disobeyed. But if Trump wants to stand up for human rights, Iran certainly seems to be the place he'll start — and the place he'll end.