"Phantom Thread" and the truth about men at work

I’m not Reynolds Woodcock, but if I had his success and power, I’m afraid that I would be 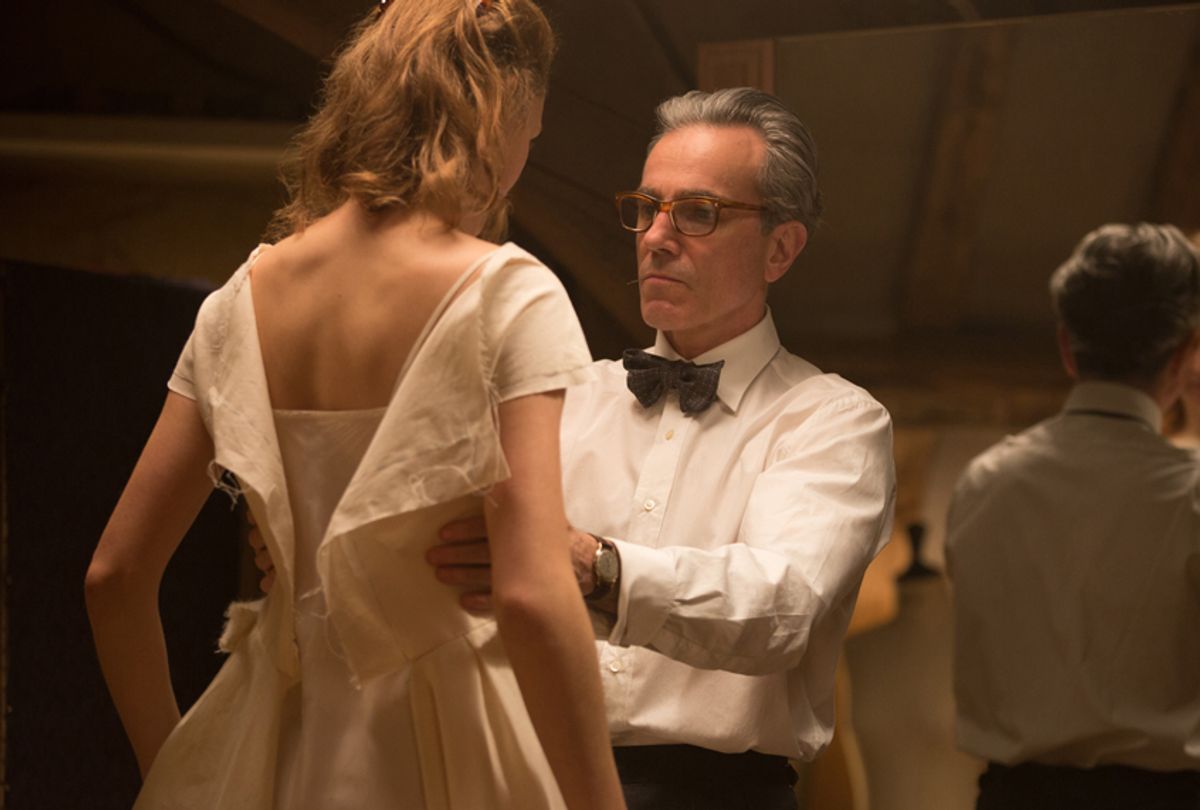 Note: This essay contains some spoilers for the film "Phantom Thread."

I like to do my writing in the morning. I get up around 7, letting my wife and our five dogs sleep in, and tiptoe to the kitchen with my laptop in hand. These are precious moments. My thoughts are clearer in the morning, and the silence is an empty space my creativity can fill. Then my family wakes up. Sometimes, I try to keep writing, but as the activity and noise level rises around me, my concentration is eventually broken. Sometimes a dog barks, and, moments later, they have all joined in, creating an unstoppable cacophony of disruptive sounds. Sometimes, my wife asks me a question about our schedules that day, or she simply tries to engage me in light conversation. How dare she? Can’t she see that I am doing important things? And how could my dogs keep barking like that when they know I’m trying to work?

“Are you here to ruin my evening, or possibly my entire life?” asks Reynolds Woodcock (Daniel Day-Lewis), a dressmaker for the rich and famous, of his lover Alma (Vicky Krieps) in Paul Thomas Anderson’s magnificent "Phantom Thread." What is Alma’s crime? She cooked him a lovely dinner and expected him to eat with her. She wanted them to be a normal couple for one night, not just a mad genius and his muse. What really disturbs Woodcock, however, is the assumption of intimacy, the threat that being cared for by another person poses to his walled-off lifestyle. He lives, works and screws in an elegant but sparse townhouse. He is responsible to no one but himself. Those are the walls that his art demand, and any crack might make the whole thing crumble.

I’m not Reynolds Woodcock, but if I had his success and power, I’m afraid that I would be. There is an irrefutable maleness in Woodcock’s plight (hence, um, the name). His life is emblematic of a society that allows men to value their work above all else and neglect their own emotional vulnerability (not to mention, you know, the needs of the people around them). Men like to complain about their work, and wield the burden of their breadwinning as a weapon, but we secretly revel in the freedom we have in our offices. For many men, work is a vacation from home, a space where they can indulge in their selfish, animalistic side. Even we nerds who sit behind laptops all day view our work that way. We may not be masters of the universe, but we wrestle complicated thoughts into existence and force them down onto the page. It requires skill and concentration, and most of all isolation. That’s what we love about it.

On the outside, I am a vocal feminist, but somewhere on the inside, I expect my wife to appear and disappear at my command, to show up when I need support and disappear when I need to write. This is how I always believed artists were supposed to (or at least allowed to) behave. On the surface, "Phantom Thread" looks a lot like the other films about creative male geniuses whose abusive personal lives are redeemed by their work. From "Ray" and "Walk the Line" to "Mr. Turner" and "Pollack," these films depict tortured men who demean their supportive partners and ask the audience to agree that the trade was worth it. In a sense, having their lives canonized through film is the final, most persuasive argument in that debate. Putting their genius and abusive behavior into one film that ultimately celebrates creativity suggests that we must accept both if we are to continue to have great art.

That’s the trade-off abusive male artists have been relying on for years. Weinstein, Spacey, Hoffman, Louis C.K., Singer and others have all relied on our deference to their genius, and they have used it to justify behavior that would not otherwise be tolerated. Woodcock is one such creative genius, revered in his own way just as much as any of today’s entertainers, and "Phantom Thread" would be cathartic art if it simply ruined him for his crimes. He could end up on the street, having lost both his career and his one true love, and we would feel order has been restored, but Anderson aims for more than simple catharsis. "Phantom Thread" is more interested in tamed, not ruined.

Woodcock’s relationship with Alma follows a predictable course for the film’s first half. After his sister and business partner Cyril (Lesley Manville) kicks his previous lover to the curb, he takes a holiday and meets his Alma, a waitress in a country inn. He brings her back to London, where she inspires and models for him. Soon, she wants to be more than his muse. She cooks him that fateful dinner, and in one of the film’s most absurdly funny sequences, she disrupts his morning creativity by committing the crime of buttering her toast too loudly. When Reynolds chides her for the transgression, we may laugh at this neurosis, but we silently cheer Alma on for the small space of freedom she has carved out. We are somehow on both of their sides at once.

This dynamic is emblematic of the mutual respect Anderson gives to both Reynolds and Alma, to man and woman. Eventually, Alma joins the list of women who want Reynolds to open up and to share her life with him, but just when he starts to push her out, Alma finds a brilliantly wicked way to humble him and keep him dependent on her. It is too much fun to spoil here, but Alma defends it simply by stating, “He just needs to take a step back.” Over the course of the film, we come to see this as a loving act, one which enables Reynolds to be his best self, a humble genius that he couldn’t be on his own. And Alma gets to continue to be his muse, albeit an empowered and perhaps equal one.

In this time of great uncertainty in the male-female paradigm, and with powerful male media figures crashing down all around us for their crimes against women, "Phantom Thread" both reinforces our new normal and yearns for a more utopian future. It’s easy to look at Reynolds as another powerful man who deserves a reckoning — and he certainly receives one — but Anderson imagines a paradigm in which abuse, if not erased entirely from the dynamic, is at least mutual. It’s as hopeful a message as we can manage right now, a humbling of the creative male genius that condenses into two hours what has taken Hollywood a century to even begin offscreen.

And please let it extend into our homes. Even as I’m writing this, my wife walks into the room on her cell phone, talking to her family about some trivial matter, nothing as important as this article. I try to be kind. “Honey, could you please take that conversation into another room? I’m working on a pivotal paragraph.” I’m a bad liar, though, and she senses the annoyance in my voice. She glares at me, humbling me even as she leaves the room, fulfilling my request while denying my delusions of grandeur. Now I’ll try to convince myself it’s just what I needed.

Noah Gittell is a film critic whose work has appeared in The Atlantic, The Guardian, The Economist, BBC, and LA Review of Books. Find him on Twitter @noahgittell.