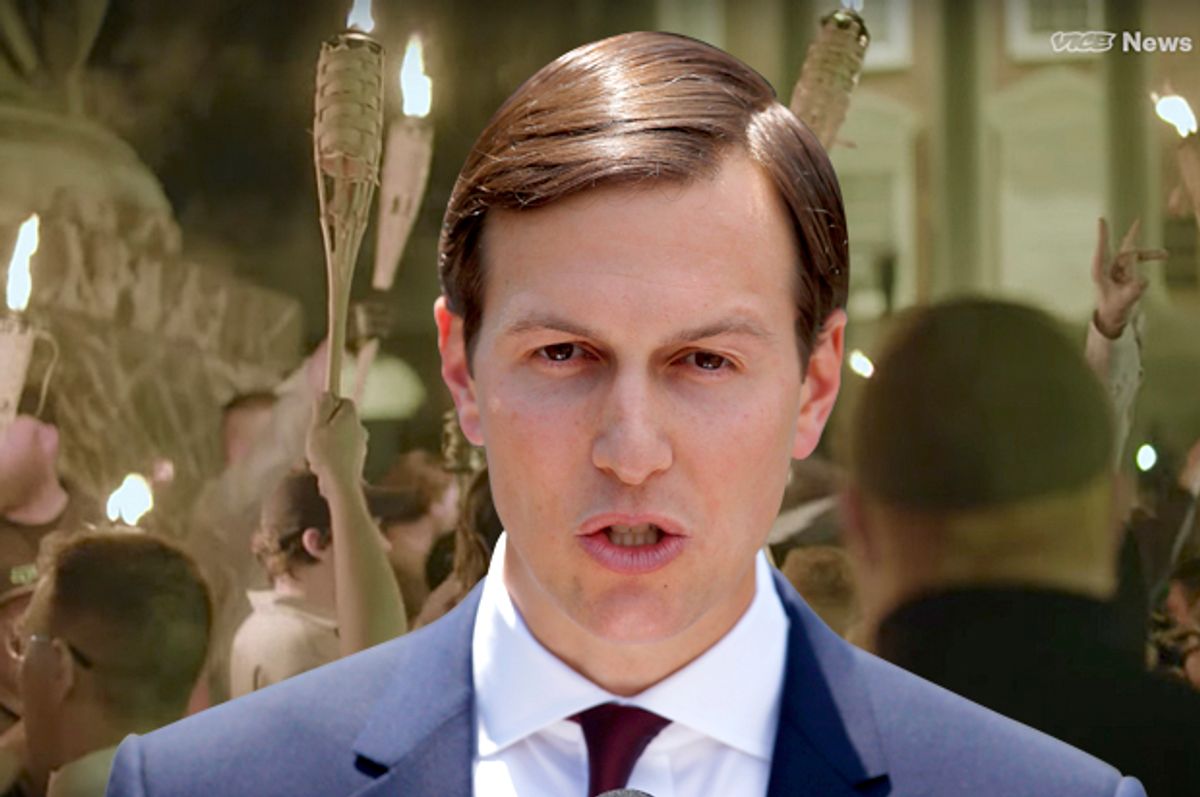 A new report indicates that President Donald Trump's son-in-law and senior adviser Jared Kushner holds a series of strong and shady financial ties to Israel, even as the administration insists he serves as a legitimate broker for potential peace efforts in the Middle East.

His family real estate business, Kushner Companies, received a $30 million investment from Menora Mivtachim, an insurer that is one of the largest financial institutions in Israel, The New York Times reported. The deal was private and took place shortly before Kushner and Trump visited Israel in May on their first diplomatic trip.

The deal "pumped significant new equity into 10 Maryland apartment complexes controlled by Mr. Kushner’s firm," the Times reported. Despite the fact that Kushner sold parts of his business upon taking a job in the White House, he still holds a significant share in his family's company, which include the Baltimore-area apartment buildings.

But the Menora deal only scratches the surface of Kushner's financial conflicts of interests in the region that make the prospect of a fair solution seem bleak at the absolute best.

"The ethics laws were not crafted by people who had the foresight to imagine a Donald Trump or a Jared Kushner, Robert Weissman, the president of the nonprofit government ethics group, Public Citizen, told the Times. "No one could ever imagine this scale of ongoing business interests, not in a local peanut farm or a hardware store but sprawling global businesses that give the president and his top adviser personal economic stakes in an astounding number of policy interests."

The Trump administration has defended itself, with a White House official saying Kushner "takes the ethics rules very seriously and would never compromise himself or the administration," the Times reported.

Kushner's family foundation also continues to donate heavily to a group that constructs the illegal Israeli settlements in the West Bank, a group largely seen as "one of the main obstacles to a two-state solution," ProPublica reported.

The Kushners have also engaged in real estate deals with "at least one member of Israel’s wealthy Steinmetz family to buy nearly $200 million of Manhattan apartment buildings, as well as to build a luxury rental tower in New Jersey." Beny Steinmetz, the most well-known member of the family, is the subject of a bribery investigation by the Justice Department, the Times reported.

"A lot of people wonder whether the United States has ever been an honest broker in the Middle East, and given the positions of the Trump administration, it’s probably even more vulnerable to those claims," Richard W. Painter, the former chief ethics lawyer for the Bush administration told the Times. Using Kushner, the U.S. is "sending over a special envoy who has already identified himself personally more with the hawkish views," he added.

"He [Kushner] is getting money from wealthy citizens and businesses in one particular country," Painter said. "You’ve got a situation that is going to be abused by people who don’t like the United States. He’s going to make it that much worse."

The Kushner family ties to Israel obviously run quite deep, and it's difficult to imagine the president's son-in-law as a fair and unbiased broker of a solution for peace in the Middle East — especially with zero prior experience of diplomatic work. Trump has received international condemnation for his brash decision, which has only further stoked tensions with the Palestinians, as well as isolated the U.S. and Israel.