Oprah 2020? The Democratic unicorn-hunt launches with a little magical thinking

Oprah would be a better president than the current guy. But she's a magical solution to an imaginary problem 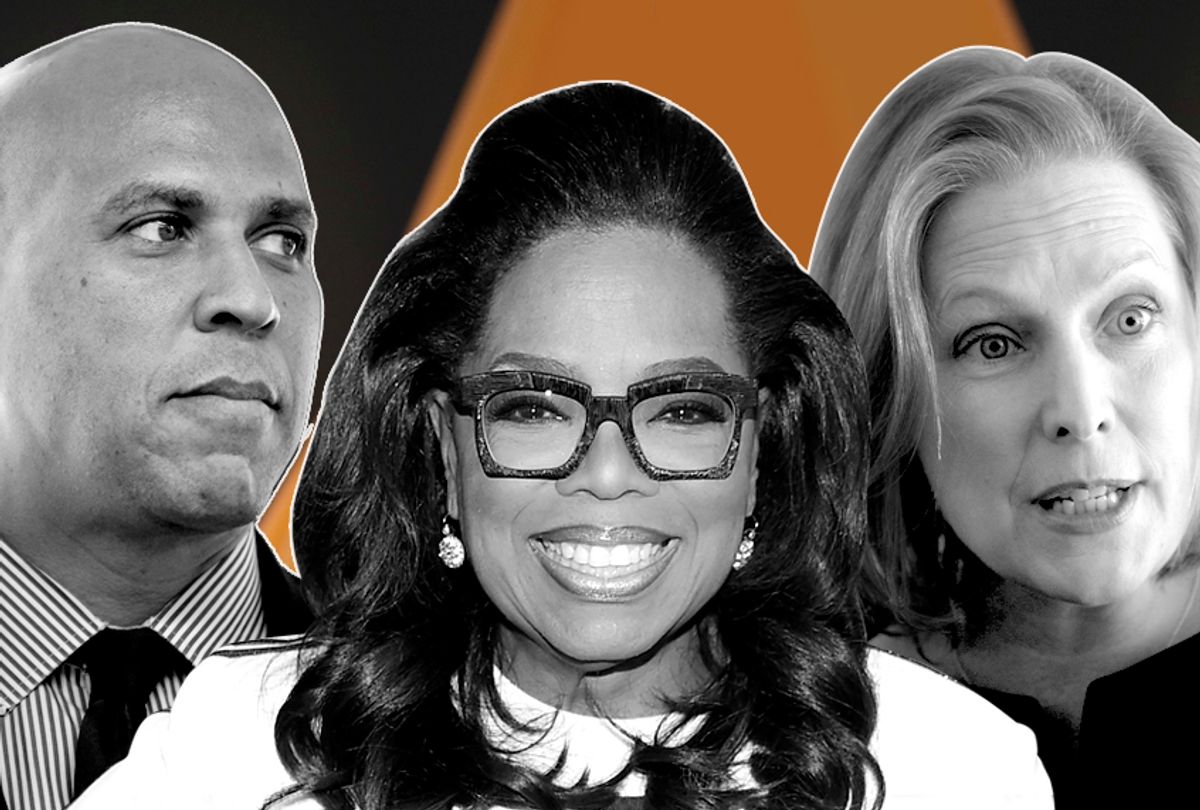 I did not realize that in skipping the Golden Globes on Sunday night — a spectacle I strove to avoid even when my principal gig was writing about the movies — I was missing the first important political event of the 2020 presidential campaign. Maybe that isn’t surprising, in the era of Nothing Is Surprising. Nearly 30 years ago, when covering the 1988 campaign, Joan Didion expressed the view that politics was more a subset of show business than the other way around. That was meant to be an unorthodox or cynical thing to say, at the time; now it’s just obvious.

So is Oprah Winfrey running for president, after delivering a fiery, #MeToo-centric speech to what is customarily a boozy, self-congratulatory evening of meaningless starf**kery? I’m having a really hard time caring about the answer to that question as much as I supposedly should. But she clearly touched a nerve deep in the achy, breaky heart of liberal America, and a whole bunch of people spent Sunday night and Monday morning earnestly debating that proposition on social media — or at least pretending to, which these days is much the same thing.

One of my co-workers expressed the view in our Monday morning editorial meeting that Oprah’s Golden Globes speech (I think this is the one case where referring to a famous woman by her first name is acceptable) was reaching for the same kind of galvanizing cultural-political effect as Barack Obama’s keynote address to the 2004 Democratic convention. My co-worker wasn’t saying she thought that was entirely awesome and she was all-in for #Oprah2020. What I took away, in fact, was an update of Didion’s argument: The two events are more equivalent than we like to think. In what sense is a 21st-century political convention a less artificial or less stage-managed spectacle than a Hollywood awards show? The latter probably allows more room for spontaneity and surprise.

I have no idea whether Winfrey will run for president, or what would happen if she did. As recently as last June she told the Hollywood Reporter she would never run for elective office, but on Sunday night her longtime partner, Stedman Graham, suggested she might be willing to heed the call of her fellow citizens, Cincinnatus-style, and put down the plough of celebrity to steer the ship of state. (“It’s up to the people,” he told the Los Angeles Times.) All this dithering and non-denial is more than enough to signal a trial balloon, albeit one that can be punctured at any moment or pronounced never to have existed. Washington Post columnist Aaron Blake now has Winfrey at No. 11 on his list of potential Democratic nominees for an election that is 58 months away, and every part of that sentence makes me feel that the emergence of human consciousness is turning out to be a grand cosmic prank.

But for reasons that should be obvious to everyone on the planet, it’s no good claiming that the idea of President Winfrey is inherently ludicrous or braying on about the sacred dignity of the office. Get a grip, people: Presidential elections have been largely symbolic or theatrical contests since at least the Kennedy-Nixon campaign of 1960. If it’s damning with the faintest possible praise to say that Oprah would be a big improvement on the current guy, I’m pretty confident she’d also be a less bad president than at least a dozen men who have previously held the office. Heaven forfend that a media celebrity with no relevant experience should besmirch the throne once occupied by John Tyler! And Millard Fillmore! And George W. Bush!

What’s really going on with the Oprah boomlet, I suspect, is the latest round of a liberal-progressive unicorn hunt, which isn’t all that new in itself but has been amplified by current Trumpian conditions. Please enjoy this CNN article from August 1999 in which Warren Beatty was said to be “very seriously” considering a presidential campaign, running to the left of announced 2000 Democratic candidates Al Gore and Bill Bradley. In fact, read it and weep: Beatty said his big issue would be campaign finance reform, because America was “getting closer to a plutocracy than we want to, and I believe that deep down the people want to do something about that.”

If Donald Trump made it clear that a person with high name recognition who sells a coherent narrative to a core demographic can get elected president, irrespective of his total lack of qualifications or relevant experience or knowledge or intelligence, the longing for a charismatic left-liberal celebrity who can reorient America’s political compass goes back at least to the Reagan era. Conservatives swept back into power in 1980, after decades of irrelevance, behind a cheerful, medium-wattage Hollywood actor delivering an upbeat (if utterly mendacious) message. Many in the left-liberal quadrant, especially after the earnest, failed campaigns of Walter Mondale and Michael Dukakis, concluded that this was how politics worked now and Democrats needed their own star.

There’s more to say about that, including the fact that one important element of the Democratic Party’s institutional decay has been an exaggerated focus on the quadrennial circus of presidential politics, during a period when conservatives labored long and hard at the grassroots to capture control of local and state governments on an unprecedented scale. Democrats’ messiah-hunt produced first Bill Clinton — whose presidency looks, in hindsight, more and more like a total disaster — and then Obama, an important historical figure whose mixed legacy is not yet clear. President Oprah or President The Rock or President Mark Zuckerberg or President Whoever-the-hell-else is the Trumpified extension of this process.

Another aspect of the Oprah-for-Unicorn campaign is the cantankerous disunity and deep insecurity found within the Democratic coalition, no doubt exaggerated by social media, where it appears that the 2016 primary campaign will end. Whoever wins the 2020 nomination will at least have to pretend to unite the feuding Bernie and Hillary factions, likely by embracing single-payer health care and the #MeToo movement and issues of racial injustice and economic inequality and a bunch of other stuff. Whether you think the intra-Democratic battle is purely philosophical or more substantive (and it’s some of both), neither the progressives nor the moderates are likely to drive the other group from the temple or beat them into submission. Unless, that is, the party’s death wish is so strong that it secretly yearns to lose two elections to a transparently awful joke candidate instead of just one, which is possible.

Democrats fear, I suspect, that none of the available 2020 prospects is a big enough personality to break the hypnotic powers of the great orange demon who rules our land and cast him back into the outer darkness whence he came. Oprah Winfrey is today’s magical solution to this imaginary problem. In rational terms that's an idiotic way of understanding elections, which are not cataclysmic Marvel Universe throwdowns between superhero and supervillain but more a matter of, you know, getting more votes than the other side. In the right distribution!

But the weasel word there is "rational," and there is something underlying the perception that the 2020 Democratic field has been pre-damaged by too many internet haters and too much internal bickering. Bernie Sanders launched a transformative moment in American politics, but that should be his legacy; his age and the lingering perception of misogyny around his 2016 campaign would be enormous liabilities next time around, unfair as all of that may be. Joe Biden is nearly as old as Sanders and vastly more out of touch with the current Democratic base on virtually every issue; given his past history with Anita Hill, the perception of misogyny is less illusory. (Elizabeth Warren, who is only a little younger than those two, has shown little appetite for the national spotlight and seems unlikely to run.)

Kirsten Gillibrand, who might be the closest thing to a prospective frontrunner the Democrats currently have, has already come under attack for displaying too much naked ambition and strategic calculation. As has been widely and acridly observed, those are not usually seen as negative qualities in a male politician. Nonetheless it may be fair to say that Gillibrand is executing a maneuver known as the “reverse Mitt Romney,” by sliding rapidly from her centrist past as a blue-dog, Second Amendment-friendly, rural Democrat toward the party’s activist base. Perhaps a racial double standard is implicated in the depiction of Cory Booker as a suit stuffed with Wall Street and Big Pharma cash, or progressive efforts to dredge up Kamala Harris’ ambiguous past as a tough-on-crime prosecutor.

My point is not about whether those people are good or bad choices, or which of them has most been poisoned by other people’s bad attitudes. They are all real-world politicians with track records of compromise and imperfect decision-making that have led others to dislike them. They are not godlike figures who can transform America with a speech at an awards show, leap over the distance from now to November 2020, and smite down the Trump administration with a sword of righteousness, such that it never actually happened in the first place. Will Democrats choose their own “Celebrity Apprentice” president, since that worked out so well for the other team? It’s a choice between magical thinking and the diminished, disappointing realm of reality; Americans have never been quite sure which they preferred.